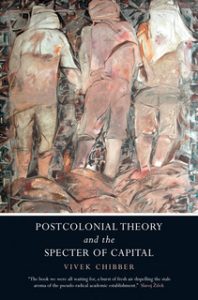 Vivek Chibber
Postcolonial Theory and the Specter of Capital

The book’s explicit target is the major tenets of the Indian Subaltern School represented by Ranajit Guha, Dipesh Chakrabarty, and Partha Chatterjee. However, the reason for the attention and controversy is that Subaltern Studies serves as a synecdoche for postcolonial studies as a whole. Chibber sees many postcolonial theorists as rejecting social science based on universal categories such as capitalism, class, liberalism, rationality, and objectivity and views himself as defending Marxism and the Enlightenment project against postmodern irrationalism.

Chibber’s broader agenda, along with the book’s widespread discussion in academic journals and the blogosphere, creates a number of questions for the reviewer. First, how convincing is Chibber’s rebuttal of Subaltern Studies as a theory? Second, to what extent do Chibber’s criticisms of Subaltern Studies apply to postcolonial theory more broadly? Third, are the conceptual tools and categories developed in Western social science adequate for understanding the Global South?

On Chibber’s account, Subaltern Studies defines itself in opposition to a narrative of political and economic modernization. The bourgeoisie struggled against feudalism and the monarchy, uniting workers, peasants and other groups by portraying its own interests as universal interests. It led an economic revolution to overturn feudal regulations and inaugurated a political revolution of rule of law and democratic rights. As a consequence, its power was hegemonic, commanding widespread consent, rather than merely coercive. According to this narrative, as capital spreads to other parts of the world, it will bring about similar political and economic changes, sweeping away pre-capitalist economic relations and bringing in Western political institutions of democracy, individual rights, and secularism.

Subaltern Studies rejects this narrative, contending that the colonial world is fundamentally different. The colonial bourgeoisie failed to achieve hegemony, leading to fundamental differences in power relations and in political psychology. Chibber reconstructs Subaltern Studies under six theses. First, the bourgeoisie under colonialism achieves dominance without hegemony, failing to unite the peasants and workers by representing bourgeois interests as universal interests. Instead of creating a universal political culture, it rules by coercion. Second, capitalism fails to bring about the economic and political transformations that occurred in Europe, instead leaving many feudal institutions intact. The persistence of these feudal institutions relates to the third thesis: that power in the colonial world does not map onto economic relationships, but includes pre-capitalist forms of social domination. A fourth thesis is that the failure of the bourgeoisie to include the peasants and workers leads to distinct elite and popular (subaltern) cultures whose politics is based on ethnic, communal, and/or religious interests rather than individual or class interests. Fifth, the nation-building projects of nationalist leaders incorporated European colonialism’s ideology and, by doing so, reproduced Western domination.

The final claim that the Subaltern Studies theorists make is that social theory with Western origins is Eurocentric and lacks adequate categories and tools for analyzing the colonial world. Peasant consciousness and agency are based on notions of community, religion, and honor, rather than individual interests and rationality. Furthermore, Enlightenment theories are guilty of “historicism” in which progress follows a uniform trajectory that fails to acknowledge the fragmented nature of the colonial world. These theses suggest that there are fundamental differences in capital, power, and agency between Western and non-Western societies that may require new theoretical tools.

Chibber responds to these claims by arguing that the major figures of subaltern studies misunderstand capitalism, European history, and human psychology. Subaltern Studies defines itself against a mythological version of European history. The European bourgeoisie did not usher in liberal democracy, but rather sought to limit the rights of workers and peasants, often in collaboration with the aristocracy. Political progress came in fits and starts as a result of workers struggling from below. Far from uniting into unified, homogenized nation-states, Europe remained fragmented so that precapitalist forms of domination persisted and India mirrors, rather than departs from its European counterpart.

The other theses fare no better. The best explanation for Indian leaders’ choice to modernize the economy is not ideology but the country’s participation in the world economy and the demands of citizens for a higher standard of living. Chibber also argues that humans around the world are motivated by their individual interests and that the struggle for political rights is based on universal human needs. He reanalyzes Guha and Chakrabarty’s own work and finds that peasant leaders devote substantial energy toward coalition building – something that would be unnecessary if peasants were primarily motivated by communal ties – and that peasants frequently refuse to cooperate because of individual interests. Furthermore, Subaltern Studies’ accusation of “historicism” is based on crude economic determinism in which capitalism’s success requires that all institutions be brought under its logic. Chibber shows convincingly that diversity often serves or is neutral toward the reproduction of capital. His harshest criticism is that Subaltern Studies, in its insistence on difference and fragmentation and its rejection of universal categories, replicates the essentialism and Orientalism of the European colonizers.

Postcolonial Theory and the Specter of Capital has become a cypher for larger debates about methodology in the humanities and the social sciences, something Chibber encourages in his final chapter where he conflates Subaltern Studies with postcolonial theory (289). His reason for focusing on Subaltern Studies is because it offers influential, theoretical claims that are subject to conceptual and empirical challenge. Chibber considers a great deal of postcolonial writing to be opaque literary analysis influenced by poststructuralist theory and jargon that does not present a clear research agenda.

Chibber’s frustration with much postcolonial theory is understandable, but he is not entitled to dismiss work that he does not engage. More importantly, the opposition between postcolonial studies and the Enlightenment tradition is unfortunate. Chibber sees himself redeeming Enlightenment Universalism against postmodern postcolonialism’s irrationalism and its endorsement of relativism. But not all postcolonial thought endorses postmodernism. As Chibber points out, Marxists including Lenin, Trotsky, Luxemburg, and Gramsci extensively theorized colonialism and his insistence that Robert Young is “spectacularly mistaken” in finding continuity from Marx to Subaltern Studies is unduly dismissive.

Furthermore, not all theorists influenced by postmodernism or poststructuralism see themselves as rejecting the Enlightenment project. This was not true of Edward Said, for instance. Explanations based on material conditions are not necessarily opposed to explanations that emphasize consciousness. Hermeneutical investigations into the representation of postcolonial subjects may complement investigations into the causes and help explain the forms capital takes in different contexts around the world.

Postcolonial Theory and the Specter of Capital is about methodology in the social sciences, opposing what Chibber sees as Marxism’s quest for “coherence and systematicity” against postcolonial studies’ eclecticism. One of the attractions of postcolonial theory is it promises to move us beyond Eurocentrism. Chibber’s claim is that this should be done not by showing differences between the East and the West, but by showing “that both parts of the globe are subject to the same basic forces and are therefore part of the same basic history.” (291) He refers to two basic forces, “the universal logic of capital” and “social agents’ universal interest in their well-being.” (291)

Though in many places Chibber clearly has the opposition between Marxism and postmodernism in mind, his basic forces can also be invoked by imperialists, advocates of modernization theory, and neoliberals. It is notable how minimal these basic forces are and how much diversity they permit. Chibber recognizes this, but does not explore how generality can be an ambiguous virtue. Until we know a great deal about the social, political, cultural, economic, and historical context of a region, it is unclear what is caused by the universal logic of capital and agents’ universal interest in their well-being. The Subaltern theorists’ question of why popular revolts in India did not lead to a national liberation movement is apt.

Chibber is surely correct that the tools of social science that have been largely developed in the Western world are adequate for understanding the Global South. No one has yet developed a compelling alternative toolset – indeed, it is unclear why hermeneutical methods favored by some postmodern postcolonialists are any less Eurocentric. Theorists should reject irrationalism, refuse to fetishize difference and diversity, strive for theoretical and stylistic clarity, and aspire to the broadest, most empirically plausible explanations. Nonetheless, theorizing about the former colonial world raises a number of questions. What is the role for economic structures and for ideas in explaining economic, political, and cultural institutions in the former colonial world? What phenomena do universal categories omit and how should they be acknowledged? Are there systemic differences between North and South rooted in history or in global economic structures? Are there similarities between former colonies that ought to be explored? Are social scientific theories and normative categories sometimes ideological (e.g., Eurocentric), imposing illegitimate assumptions and categories when they are employed in an unfamiliar context?

Postcolonial theorists, including Guha, Chakrabarty, and Chatterjee, have attempted to answer some of these questions. Chibber has shown that their answers are not compelling, but he has not demonstrated that other postcolonial theorists have not developed useful analyses for understanding the legacy of European colonialism. Nor has he offered much of a way forward.