Marx & Philosophy Review of BooksReviews‘Capital as a Social Kind: Definitions and Transformations in the Critique of Political Economy’ reviewed by Bill Bowring 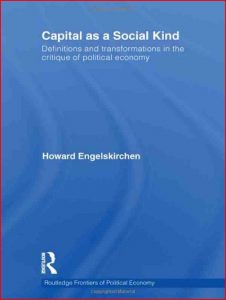 Howard Engelskirchen
Capital as a Social Kind: Definitions and Transformations in the Critique of Political Economy

In this new book Howard Engelskirchen presents an original analysis of the nature of capital, and a set of tasks for curing its ills. In an engaging interview at Left Forum 2011 in New York (http://www.youtube.com/watch?v=Jmln6NtDMGk), Engelskirchen succinctly defined “capital as a social kind” as being the intersection of the separation of workers from their means of production, and the separation of the enterprises from each other. Much of the book under review is the working out of this basic idea.

Engelskirchen is a veteran teacher of law and philosophy, and his book brings together a lifetime’s research and activism, under the banner of a militant commitment to scientific realism. Engelskirchen is also a serious scholar of Karl Marx, in English and in German, and this is especially evident in Chapter 4, “The concept of capital in the Grundrisse”, written for a forthcoming collection In Marx’ Laboratory. Critical Interpretations of the Grundrisse. In part the book contains articles written between 2004 and 2008, but Engelskirchen draws together a wide range of themes in order to conclude with his precepts for “Winning the battle of democracy” (Chapter 7).

These are not the battle cries most often heard on the radical left, but they share their source in the most important influence on Engelskirchen, the French Marxist economist and historian Charles Bettelheim (1913-2006). In fact, one passage is cited by Engelskirchen three times, twice in full, (25, 55 and 91). This is a passage to be found, with Bettelheim’s emphasis, on p. 77 of the 1975 English translation of Bettelheim’s Economic Calculation and Forms of Property.

However, if the Conclusion is dominated by the five Bettelheim-influenced tasks, the significance of treating capital as a social kind has almost disappeared. Engelskirchen refers four times (157 twice, 160, 163) to “overcoming” or “transforming” – twice each – capital “as a social kind”, but with no further exposition, especially as to how the phrase “as a social kind” adds anything at all.

How does Engelskirchen find his way to the notion of a “social kind”?

It would be surprising not to meet Roy Bhaskar in a work committed to scientific realism, and Engleskirchen refers several times to three works of the early Bhaskar: A Realist Theory of Science (1975), The Possibility of Naturalism (1979) and Reclaiming Reality (1989). But this book is not an exegesis of the early Bhaskar, though Engelskirchen acknowledges the inspiration of Bhaskar’s revolutionary challenge to social constructivism and philosophical idealism in general. It is noteworthy that Bhaskar is nowhere cited as having anything to say about “natural kinds” or “social kinds”.

A much stronger influence has been that of Engelkskirchen’s contemporary and close colleague, Robert Boyd (b.1942), the Susan Linn Sage Professor of Philosophy at Cornell University, to whom Engelskirchen owes his conception of “natural kinds”. Indeed, Boyd provides an enthusiastic introduction to the book under review, recommending Engelskirchen’s explication of Marxism as the way “to avoid a forced choice between positivism and postmodernism” in studying complex social phenomena, and as providing a “convincing alternative to relativist conceptions” of moral theory.

Drawing from an article published by Boyd in 1991, “Realism, Anti-Foundationalism, and the Enthusiasm for Natural Kinds”, Engelskirchen identifies three key features of “the central core conception of natural kinds” (42), and, he argues, of social kinds. First, Boyd argues that the definition of a kind must be arrived at a posteriori rather than by social convention. Second, the kind must be defined by properties which characterise a causal structure that exists independent of our theorising. Third, there must be a causal relation between the instantiation of the kind and the use of the kind term in reference. What are these “kinds”? They are “potent structures” which exist in the world, including the social world (38).

Any further puzzlement as to what is a “natural kind” is dispelled by the fact that water, as H2O, appear no less than eleven times through Engelskirchen’s text (8, 13, 23, 24, 36, 37, 40, 56, 87, 88, 89). On water’s first appearance Engelskirchen explains that “H2O refers to a molecular configuration that ultimately regulates our understanding of what water is and how it behaves.” (8) Engelskirchen also tells us that “H2O is the real definition of water” (24), and “the category H2O makes it possible for us to accommodate our explanations and practices to the causal reality water presents.” ( 56) This last assertion is to be found in Chapter Three “Separation and subordination. The real definition of capital as a social kind.” For Engelskirchen, “we look for the causal structure of capital, its most fundamental form of material organisation, the essential characteristics that explain what it is, how it persists as what it is, and how we can expect it to behave over time.”

At the very end of this complex chapter we find a section entitled “The real definition of capital” (82), which contains the formulation “capital is living labor in the process of production appropriated by objectified labour for the sake of increasing objectified labor.” In Chapter Four, already mentioned, we find that “value” and “the social relations of value” are social kinds; indeed value and capital are both social kinds “as material social relations” (101). “Commodity-producing labour” is also a social kind.

I mentioned that Engelskirchen is also a lawyer, and the most intriguing but for me least convincing chapter of his book is Chapter Five, “Value and contract formation”. What Engelskirchen wants to do is to show that “the explanation of a textbook rule of contract formation in Anglo-American law may be derived from Marx’s analysis of value.” (106) In this chapter he draws especially from Marxism and the Philosophy of Language which was published in 1929 by Valentin Volosinov (1895-1936 – in fact his name is incorrectly rendered in the translation used by Engelskirchen, it was Voloshinov). The reader may be initially puzzled by the fact that “Volosinov” appears after authors beginning with “W” in the Bibliography – one of the few errors in the book. Engelskirchen takes as the object of investigation in this chapter the legal doctrine of “consideration”, described by textbook writers as “a secret paradox of the common law” and “an unsolved mystery”. Mobilising Marx and “Volosinov” (for the proposition that a sign is a material thing), Engelskirchen believes he can show that “the puzzle stems from a failure to consider the way contract formation functions in the reproduction of value.” (122) The final sentence of the chapter is indeed startling: “A final point: if the argument just given explains a legal category not previously given coherent theoretical explanation, this in itself constitutes independent evidence for the scientific correctness of Marx’s analysis of value.” (123) This smacks of the posthumous miracle working of the type that gets you a sainthood in the Catholic church; but does Marx need independent evidence of this kind?

The reader of this review might presently be wondering whether Engelskirchen has an opponent. The answer is that he does, although this is not immediately apparent. Engelskirchen is in fact arguing not against positivists or post-modernists at all, but against the “value-form theory” of Christopher Arthur and others, with its roots in Essays on Marx’s Theory of Value (1924) by Isaak Rubin (1886-1937) – not mentioned by Engelskirchen – and The Making of Marx’s ‘Capital’ (1967) by Roman Rosdolsky (1898-1967). Value-form theory is rather jauntily dismissed by Engelskirchen as follows: “But, in fact, while calling attention to the question of form, value-form theory has pretty systematically noticed only one-half of Marx’s critique of Ricardo, and this has muddied everything.” (31)

Later Engelskirchen offers a more sustained critique. According to him, the critical thing is that,

Value-form theorists have not understood the distinction presented at the beginning of Capital between value and its nature … In consequence, the value-form tradition tends to substitute theories of value’s forms of appearance for value’s constitutive form. In the event, an inversion occurs: value’s forms of appearance – exchange value and money – are called upon to play the role actually accomplished by value’s kind constitutive properties. At the limit because no sense can be made of the substantial content of value, value comes to be considered “pure form”. (45-6).

In his analysis of commodity exchange, Arthur treats value as an expression of “pure form”, abstracted from all materiality, which, by analogy with Hegel’s concept of pure Being, becomes the source of all subsequent development of the logic of Capital.

My take on Arthur is rather different; indeed this is not how Arthur states his case at all. In Arthur’s (2004, 11) words, Rubin ‘stresses that all the material and technical economic processes are accomplished within definite historically specific social forms. Things, such as commodities, are assigned a social role as mediators of production relations.’. For Arthur (2004, 157), ‘value is an unnatural form that clings, vampire-like, to labour, and feeds off it’. In order to explain the content he gives to this metaphor, Arthur draws from Roy Bhaskar’s 1993 notion of real negation or absence, as opposed to ‘ontological monovalence, the purely positive account of reality’. That is, if absenting is a real process, what has become absent through such a process leaves not simply ‘nothing’, but a ‘determinate nothing’ ‘structured by the specific process that brought it about’. Arthur analyses ‘the emergent properties of the determinate absence of use value’, that is, the alienation from human beings of the enjoyment of the products of their labour, in the bizarre world of capital. As Arthur puts it, ‘there is a void at the heart of capitalism … the circulation of commodities and money as seemingly material objects supports a world of pure form’. Arthur describes the lethal emptiness at the heart of capital:

If we treat value as the spiritual essence of the capitalist economy, its range of incarnations all centre on a single origin, namely money, the transubstantiated Eucharist of value; ‘the spectre’ is this hollow armour, at once mute metal and possessor of the magical power to make extremes embrace. The spirit is made metal and stalks among us. The spectre interpellates all commodities as its avatars, an uncanny identity of discernibles, a spectral phenomenology. This negative presence, posited thus, fills itself out through emptying them of all natural being, and forming for itself a spectral body, a body of spectres. In capitalism all is always ‘another thing’ than what it is. (2004, 167)

For this reviewer at least, value-form theory is much richer and more suggestive than the separations of Charles Bettelheim.