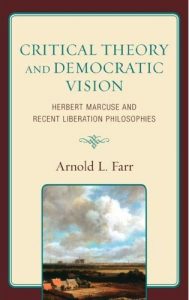 Jeffery L Nicholas is author of Love and Politics: Persistent Human Desires as a Foundation for …

One can divide Farr’s discussion into two parts: first, an exegesis of Marcuse and, second, a critical engagement with Rawls and Habermas. The first part consists of six chapters. Farr frames his analysis of Marcuse with a discussion of liberation philosophy and democratic struggles. The concept of freedom – embracing the values of self-development and self-determination – connects Marcuse, democracy, and liberation philosophy. Inequalities prevent self-development and self-determination. A critical theory, then, comprises a complete social theory confronting the key problems of the day, especially forms of alienation in society. Critical theory is akin to liberation philosophy. ‘Liberation philosophy as theory radically alters one’s approach to the world, transforms one’s way of teaching and writing. Indeed, one teaches to transgress’ (6). Seeing from the perspective of the oppressed proves central to this understanding of liberation philosophy. Farr successfully, I think, includes in his discussion insights from an African-American perspective that honors this notion of liberation philosophy. He argues that Marcuse was a liberation philosopher because he thought from the perspective of the oppressed and challenged us to find within present social conditions the seeds for a qualitatively better life. Doing so requires rejecting the scientific reductionism that contaminated Marxism and expanding the notion of revolution beyond the merely political. Both projects entail looking for the revolutionary subject.

Marcuse begins his career by looking for the conditions for subjectivity. Marcuse’s work on Heidegger and Hegel proves essential to this project. From Heidegger, Marcuse takes a focus ‘on concrete human existence’ (24). In Heidegger and Hegel, Marcuse finds a type of negative thinking that proves vital to his later work. Historicity entails, not only that we are thrown into, or formed by, our present circumstances, but also both that the form of revolution is socially shaped and that the revolution exists already in the very constitution of the subject. Thus, negativity highlights the contradictions in current reality because it contrasts the way things are with the possibilities unrealized but extant in present reality. Thus, Marcuse adopts the liberatory understanding of the Hegelian doppelsatz: ‘Every existing state must overcome its immediate form if it is to become self-actualized’ (33).

To uncover the revolutionary potential he believes exists in the individual, Marcuse turns, in Eros and Civilization, to Freud. In order to understand how capitalism survives, Marcuse looks at Freud’s understanding of the human person. Freud’s notion of the ‘performance principle,’ which Marcuse calls the reality principle, explains why human beings repress their natural instincts in order to live in society. While some repression proves necessary for social living, ‘surplus repression’ denotes that repression which masks real interest in freedom and forces a greater repression of human instincts than necessary. ‘According to Marcuse, repressed instincts continue to struggle for liberation’ (52). Phantasy, then, serves a critical function in that it allows the expression of repressed instincts in the imagining of a society in which human needs are met. While critics have held that Marcuse’s reliance on Freud makes his philosophy too individualistic, Farr contends that Marcuse ‘struggled to overcome the radical individualism that permeates western society’ (63).

With the cultural protests of the 1960’s, Marcuse returned to the biological instincts that he thought could motivate true liberation. Farr carefully lays out Marcuse’s relationship with and the problems that betray the New Left. This allows him to make two criticisms of Marcuse: he is overly optimistic that a revolutionary subject exists and he wants to identify this revolutionary subject with a group rather than with individuals. Despite these failings, Farr rightly contends that true democracy will not arise without the sensibility found in Marcuse’s philosophy.

In the second part, Farr covers Rawls, Habermas, and the normative implications of Marcuse’s work in three separate chapters. Farr focuses on the second part of Rawls’ difference principle viz., that social inequalities should benefit the least well-off in society. The difference principle, however, relies on a proceduralism that denies difference. Rawls’s veil of ignorance cannot overcome the bias that adheres to a concept of ‘self.’ Marcuse’s theory, however, shows that human beings are historical and that critical theory must be cognizant of the injustices in present society and rooted in the possibilities inherent therein.

Where Rawls’s theory proves too abstract concerning the individual subject, Habermas’ theory of discourse ethics entails a notion of intersubjectivity in which individuals are formed in discourse. Habermas turns away from the search for a revolutionary subject and embraces a procedure of intersubjective self-formation. In doing so, he over-intellectualizes through excluding sensibility. Farr contends that Habermas went too far by abandoning his early project that Marcuse shared: ‘an examination of systematically distorted communication’ (156).

In his final and most promising chapter, Farr argues for a re-appropriation of Marcuse through a discussion of Chantal Mouffe’s ‘process of interpellation.’ This process involves recognizing the forces that go into forming the human subject: the contradictory ideas and the concrete lives of human individuals. Individuals form identities that conflict with expectations. Farr explores this point through the notion of the body. While philosophers tend to ignore the body, Farr, following Elizabeth Grosz and Cynthia Willet, shows that the body plays a central role in political and social life. We encounter each other as bodies. These bodies often are understood and treated in ways that contradict what people say – for example, that all people are free, but that the body suffers from a lack of resources, food, and housing. For Farr, Marcuse’s critical theory can make a contribution to the liberation philosophies that address social injustices exactly because, unlike Rawls, it embraces historicity and, unlike Habermas, it embraces the sensual. It further carries a notion of negative thinking that can highlight how present reality contrasts with present possibilities.

Farr’s discussion of the Hegelian and Heideggerian backgrounds to Marcuse’s early work helps situate Marcuse’s thought in the history of philosophy and in the philosophical dialogues at the time. Further, Farr convincingly argues for a unified view of Marcuse’s work, especially as an attempt to find a revolutionary subject. Farr rightly emphasizes Marcuse’s contribution in uniting the historicity of the individual, the role of negative thinking in critical thought, and the sensibility of individuals. The first six chapters work as an introduction to Marcuse for those interested in Critical Theory and in Marcuse. One could press Farr to be more critical in his account, however. For instance, Farr defends Marcuse from the charge of individualism by arguing that a theory of intersubjectivity remains latent in Marcuse. He never develops this notion of intersubjectivity, but he insists that it rests on Marcuse’s concepts of sensibility and eros. While I think Farr’s insight shows potential, he makes things too easy for Marcuse by not drawing out this aspect of eros. In short, where Farr gets really interesting, the book ends.

Which raises the issue, What is the purpose of Farr’s account? While I have stated that the first part proves excellent for the untutored, Farr’s stated purpose is to show that liberation philosophies should return to Marcuse’s key insights. Yet, Farr’s account seems haunted by his earlier statement that liberation philosophy resists definition. While he discusses certain strands of feminism (and, notably, he does not explain which strand or even that different strands exist) and further discusses issues of race, one is never quite sure if any of these comprises a liberation philosophy. Interestingly, again, Farr’s own discussions of race, more prevalent in the last third of the book, prove the most powerful part of the work. I would much rather have seen a book that used Marcuse’s work to explore Farr’s account of racism and a development of a liberation philosophy of race because I think Farr offers keen insights on these issues.

These insights rest with the notion of sensibility, body, and intersubjectivity grounded in eros. Just these notions, however, highlight my question about audience and purpose. The discussion of One-Dimensional Man proves significant for a book introducing students to Marcuse, but less so for a book on liberation philosophy. The real theme that runs through the critical part of Farr’s account, which proves so interesting and so short, is that of the instinctual drives that ground negative thinking and intersubjectivity.

This theme returns me to the criticism offered at the beginning: Farr’s account of Marcuse shows the limits both of Marcuse’s philosophy and of current debates in critical theory. Just as contemporary critical theory remains tied to Habermas’ appointment as heir to the Frankfurt School, modern political theory remains tied to discussions of Rawls. Yet, a theory embracing Marcuse’s historicity and aspiring to a liberation philosophy should challenge these commitments, especially when alternative theories prove more fruitful on Marcusean grounds. As noted, Farr believes Marcuse’s commitment to finding a revolutionary subject in a group and his Lenin-esque avant guardism problematic. These are exactly the problems Alasdair MacIntyre (1970) addressed in essay and book form – work that Farr does not address. Moreover, Farr contends that traditional philosophy avoids discussion of the body, and he rightly turns to the work of current feminists. Yet, MacIntyre’s recent work makes contributions here exactly in ways that avoid the criticism Farr makes of Rawls and Habermas: an account of human sensibility that avoids the proceduralism of Rawls and Habermas and, further, grounds liberation in the everyday interactions of human beings and in their bodies. I find Farr’s account of Marcuse both informative and highly engaging at points. Yet, just because it aspires to be a liberation philosophy, I challenge it for failing to question contemporary modes of discourse in political theory and critical theory. Marcuse’s critical theory does hold promise for future liberation philosophy, but those philosophies would do well to engage, not Rawls and/or Habermas, but Marcuse and MacIntyre.