Marx & Philosophy Review of BooksReviews‘How to Change the World: Tales of Marx and Marxism’ reviewed by Sean Carleton 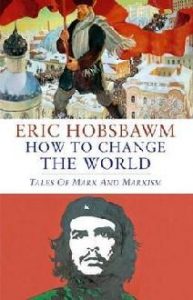 E J Hobsbawm
How to Change the World: Tales of Marx and Marxism

Everyone wants to change the world, but no one wants to read Marx! Eric Hobsbawm’s new book How to Change the World attempts to help remedy this problem through a curious, specialized, at times awkward, and yet insightful examination of the history of Marx and Marxism from 1840 to the present. Like the majority of works by Marx and Engels, How to Change the World is not an easy read nor is it a prescriptive, “How-To” manual for global proletarian revolution. Instead the book is a collection of Hobsbawm’s writings, penned between 1956 and 2009, interrogating the importance of the works of Marx and Engels (and Gramsci) in general and their influence on “Marxian” movements aimed at “expropriating the expropriators,” abolishing capitalism, and bringing about different manifestations of socialism more specifically. In tracing the ebb and flow of revolutionary Marxism over more than one hundred and sixty years, Hobsbawm boldly proclaims that what the twenty-first century needs is more Marx (5). Not only is Marx’s analysis “valid and relevant” for today but his stinging critique of capitalism, its contradictions, and propensity for crisis continues to throw light on contemporary social problems (14). How to Change the World, then, is not only Hobsbawm’s meditation on the history of Marx and Marxism, but more importantly it issues a challenge for academics and activists today to return to the writings of Marx and Engels in reconsidering contemporary methods for changing the world.

How to Change the World is divided into two parts: the first examines the writings of Marx and Engels and the second evaluates their influence on the history of Marxism as a movement. In Part I, Hobsbawm argues that Marx and Engels’ writings, now published and translated in many languages and supposedly freed from the stranglehold of the USSR’s “official Marxism,” are relevant for the twenty-first century. Indeed, the future globalized capitalist world envisioned by Marx and Engels in the Communist Manifesto looks much like the world of today. Thus, Hobsbawm suggests that the works of Marx and Engels be understood not as Holy Scripture, dogma, or institutionally buttressed orthodoxy to be “believed in” but as works to be studied for what they continue to contribute to the larger project of abolishing capitalism and bringing about their vision of socialism. Hobsbawm begins by describing the development of Marx and Engels’ thought and the influence of a variety of pre-Marxian socialist ideas from Rousseau’s egalitarianism and Proudhon’s view of property as theft to Fourier’s analysis of labour and Owen’s and Feuerbach’s conceptions of materialism. Hobsbawm points out that Marxian socialism differed in three crucial respects: it offered a comprehensive critique of capitalism, it linked socialism with evolutionary historical analysis, and it identified the proletariat as the agent of revolutionary change (44). Hobsbawm is careful to argue that Marxian socialism did not simply displace or signal the end of alternative conceptions of socialism, but rather it offered a politically poignant program in tune with historical circumstances of the time that still holds relevance for today.

After establishing the emergence of Marx and Engels’ view of socialism, Hobsbawm examines more closely their ideas on particular subjects and considers the importance of a few selected texts. For example, Hobsbawm highlights the nuance and complexity of Marx’s view of the state as serving the interests of the ruling classes but not directly representing them as well as the importance of the international context for revolutionary mobilization. Hobsbawm also rightly cautions readers to critically interrogate Marx and Engels’ views on colonial liberation and deems the authors’ thoughts on “pre-capitalist” formations as “brilliant but incomplete and tentative” (171). Here, Hobsbawm teeters close to the brink of defending some of Marx and Engels’ more uncomfortable passages, but does well, in the end, to contextualize such ideas and demand proper scrutiny. Such works as Engels’ The Condition of the Working Class in England and Marx’s notes published as the Gundrisse should, according to Hobsbawm, be studied for what they reveal about Marx’s and Engels’ thought processes and changing ideas about industrial capitalism in the nineteenth century. Hobsbawm also asserts the enduring relevance of The Communist Manifesto not so much as a Marxist or political “classic,” but as a document that outlines, historically, the ruthless and destructive tendencies of capitalism and encourages workers to organize collectively, as the majority of the world’s population, to end the exploitation of the many by the few and create a new society. And while two short chapters on Antonio Gramsci are included in Part II, Hobsbawm argues that Gramsci’s theory of political action is relevant today for those interested in developing revolutionary strategies to bring such a society into existence. Gramsci, according to Hobsbawm, is the “most original thinker in the West since 1917” (316) primarily for his ability to examine revolutionary strategy “as it is and not as in theory it ought to be” (326). Hobsbawm argues that for Gramsci, socialism was not simply about social ownership and planned economic development, but included the constant struggle to transform social behaviour and create a new people “as both the negation and the fulfillment of the past” (330). Gramsci’s comments on the dialectic between continuity and revolution as well as his belief that the `War of Position’ needs to be advanced as a fighting strategy before, during, and after the transition to socialism is, like the works of Marx and Engels, particularly relevant to contemporary discussions.

In Part II, Hobsbawm traces the widespread influence of the writings of Marx and Engels on Marxian movements. Hobsbawm maintains that even among their critics, Marx and Engels have profoundly shaped the intellectual and political terrain of the world since the 1840s. Indeed, Hobsbawm argues that “the political impact of Marxism is no doubt the most important achievement of Marx from the point of view of history” (347). Hobsbawm begins by interrogating Marx and Engels’ Victorian critics who, for the most part, accepted Marx’s theory of value, cited his ideas on unemployment, and respected his historical explanation of capitalism’s development. Moreover, the Victorian critics did not attack Marx’s motives, originality, or integrity; instead they merely expressed a “tone of denigration” (207). Such a tone of denigration among the Victorian critics did not prevent Marx and Engels’ works from greatly influencing people, as Hobsbawm describes, during the great expansion of labour and socialist movements in the 1880s and 1890s during the Second International. In a subsequent chapter, Hobsbawm explains that during the 1930s many new Marxists were attracted to the works of Marx by their increasing availability, the crisis of capitalism of the Great Depression, and the USSR’s apparent immunity from economy stagnation. However, Hobsbawm points out that many workers rightly turned their attention away from proletarian revolution during this period to ensuring the defeat of fascism. Moreover, Hobsbawm argues that by the 1950s and 1960s Marxism had moved away from workers movements and parties and had become primarily associated with intellectuals. And while the publication of previously unknown or unavailable works spurred a new Marxist pluralism at the time which helped disrupt “official Marxism,” by the 1980s and 1990s the retreat from Marxism had advanced to such a degree that Marx’s influence was proclaimed “dead.” Indeed, during Marxism’s “darkest years” of the late twentieth century it was believed by many that Marx had, at best, “ceased to be a relevant thinker” and, at worst, was personally responsible for Stalin’s purges, the horrors of the gulag, and the KGB (385).

Nonetheless, Hobsbawm is hopeful for Marx and Marxism in the twenty-first century. He believes that the economic crisis of 2008, as “a right-wing equivalent to the fall of the Berlin Wall,” has proven, powerfully and unequivocally, that capitalism is not the answer (414). “The market,” moreover, clearly cannot solve the major problems we are facing in the twenty-first century and neo-liberal states have demonstrated their interest in supporting an exploitative system that benefits few at the cost of many. And yet, workers have not been transformed into capitalism’s `grave diggers’ as Marx predicted, nor do we appear, according to Hobsbawm, to be a capable force for bringing about revolutionary social change. Yet, while I share much of Hobsbawm’s frustration, he did not have the benefit of witnessing workers’ responses in the streets of Cairo, Madison, and Athens, to name but a few, in the short months after How to Change the World was published in 2011. Such actions were filled with tales of defeat, success, and worker solidarity that may yet breathe new life into the international labour movement. Regardless, I doubt such events would have changed Hobsbawm’s argument in the final analysis. Put simply, much contemporary “anti-capitalist” organizing – both inside and outside of the labour movement, especially in North America with which I am most familiar – confirms Hobsbawm’s assertion that we represent “protest rather than aspiration” (414). This is not to say that workers are not actively fighting to bring about a better world, but rather that our aspirations, for the most part, rarely seem to reflect the radical insights about the systemic injustice of capitalism and the necessity of socialism put forward by Marx and Engels. Thus, while How to Change the World raises more questions than it provides answers, in the end, it makes an important call to academics and activists today to draw on the works of Marx, Engels, and Gramsci as well as the lessons from past Marxian movements in our struggles to develop new tactics and strategies for bringing about radical, social change in the twenty-first century.