Marx & Philosophy Review of BooksReviews‘Fear of a Yellow Vest Planet: The Gilets Jaunes and The Battle for The Future of France’ by Peter Wilkin reviewed by Thomas Klikauer, Meg Young 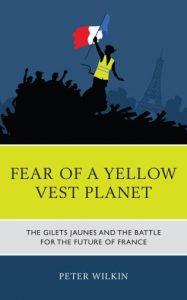 Peter Wilkin
Fear of a Yellow Vest Planet: The Gilets Jaunes and The Battle for The Future of France

Meg Young (GCA and GCPA, University of New England at Armidale) is a Sydney Financial Accountant …

In 2018, the new social movement of Yellow Vests (Gilet Jaunes) emerged in France as a wave of populist grassroots protests. It began on 17th November 2018 and ended 1st May 2021 due to the COVID-19 pandemic and the ensuing lockdowns. Wilkin’s highly readable book on the movement is divided into five chapters. Chapter One is named “The Core Eats Its Own”. This is followed by “Napoleon IV” and “Les Beufs are Coming”. The final two chapters are entitled “A Threat to Democracy” and “The Emperor Strikes Back”.

Until today, the Yellow Vest movement has been highly controversial, to say the least. There is a ‘fear that they are part of an extremist populism that is undermining liberal values, representative democracy and the European Union’ (1). Yet the Yellow Vests started as a social movement ‘triggered by the imposition of a fuel tax [while later mutating into a] protest against neoliberal capitalism’ (1). The Yellow Vests challenged neoliberalism’s core ideology of a wealth redistribution upwards from the poor to the rich. This is the unspoken class war against the working class.

Yet, Yellow Vests were born out of a ‘fundamental sense of injustice at the dominance of the 1 per cent’ (p. 4). This remains at the heart of virtually all Gilets Jaunes protests. And this also includes, as Peter Wilkin argues, ‘progressive neoliberal ideas associated with…Obama, Blair, Trudeau and Macron’ (4). The author correctly sees the Yellow Vests as ‘a form of progressive populism [with] an appeal to the people over and above existing governing institutions’ (5).

The contrast between the UK and France could hardly be sharper. Convincingly, Wilkin argues, ‘we see the Gilets Jaunes emerging in France, whilst Brexit dominated political protest in the UK’ (8). As for France, Wilkin reasons that the Yellow Vests are simultaneously a national protest and at the same time, they remain part of a global opposition set against the market and its neoliberal manifestations introduced since the 1980s – the year when Ronald Reagan married Maggie Thatcher. In other words, the French protest against the neoliberal market.

Meanwhile, Britain’s Brexit had just removed an – admittedly highly-tamed – market-moderating institution: the EU. Realistically, Wilkin also acknowledges the inevitable. ‘There was a left-wing argument for leaving the EU (Lexit), which socialists had long viewed as being a “capitalist club” (14). True, the main aim of the EU has not been the introduction of democracy but to push through every single element of Hayek’s deeply ideological catechism of neoliberalism.

Perhaps one of the key arguments of Wilkin is that the Gilets Jaunes signify a pressing demand for a fundamentally transformed social life in order to tackle climate change and, in a way, which is socially just rather than being an expectation that the poorest will pay for the cost of it. The last point is crucial as it is evident that the contemporary lifestyles of the rich are completely unsustainable in any future model of a sustainable world-system’ (12).

Wilkin rightly argues that the Yellow Vests signify an insurgency of the working classes against the threat of ever accelerating neoliberal takeover in France. These revolting classes include those the EU classify as the working poor and the non-working poor as well as, the traditional working class, the unemployed, the retired, the disabled, sections of the middle-class, and other marginalised and socially-isolated classes.

Indeed, for the ruling elite of France including the self-appointed “liberals”, the Yellow Vests are something far worse. They represent an autonomous working class rebellion against the rule of capitalism. In this context, those Wilkin calls “centrist liberals” are not to be understood in the American perception. Instead, France’s centrist liberals are the willing executioners of neoliberalism. They supported the bailout of the banks during the Global Financial Crisis. The Yellow Vests represent the exact opposite. One can only agree when Wilkin argues, the hegemonic ideology of neoliberalism ‘has led governments to provide relief to the wealthiest, in this case the banks’ (21). At the same time, others have lost their savings and houses.

Perhaps the neoliberal agenda can be truly summed up in the words of Adam Smith: ‘all for ourselves, and nothing for other people…the vile maxim of the masters of mankind’ (27). For the more religiously inclined, Hayek’s and von Mises’ neoliberalism strictly operates according to the Biblical Matthew Principle, for to every one who has will more be given, and he will have abundance; but from him who has not, even what he has will be taken away.

Neoliberalism have never existed in contradiction to fascism. Wilkin writes, ‘von Mises was able to act as an advisor to Austria’s fascist Chancellor Dollfuss in 1933’ (28). Meanwhile, his ideological off-sider – Hayek – was very supportive of the fascist Pinochet dictatorship that overthrew the democratically-elected Allende government in Chile in 1973. The historical evidence points to a strong fascism-neoliberalism link. Indeed, Wilkin is correct when saying ‘neoliberalism works much more smoothly as a system without democracy’ (29). In fact, neither capitalism nor neoliberalism needs democracy.

As a representative of neoliberalism, the global investment firm Black Rock welcomed the election of French President Macron immediately telling him what to do, ‘labour market reforms that would make it easier for French businesses to hire and fire’ workers (53). Set against this, the Yellow Vests are perhaps best understood as a progressive movement as well as a resurgence of class identity. It is the identity of those pushed down that remains one of the most striking features of the Yellow Vests.

One of the most essential points that adds to the understanding of the Gilets Jaunes occurred on 17th November 2018. At that time, Macron’s neoliberal government planned ‘a rise in fuel tax…to build an environmentally sustainable society’ (55). Yet, ‘the money was not being invested in green public transport or anti-pollution measures. Right on the mark, Wilkin emphasises that for the Gilets Jaunes, ‘it was just another ruse to make the poorest pay’ (55). What Wilkin has identified marked the crucial turning point that resulted in the rise of the Yellow Vests. On 17th November 2018, ‘between 300,000 and 400,000 [protested] across France’ (55). The protests of Yellow Vests only died down with France’s introduction of Covid-19 restrictions which occurred around September 2020.

In terms of composition of the Yellow Vests, Wilkin says that 58% came from the far left or left and 18% from the right or far right. In other words, the majority of supports are from the progressive side politics – not from the reactionary side. The somewhat unclear mixture might also have occurred, in part at least, because of a lack of a clear unifying political ideology that shaped the protests. Furthermore, there is also the planned “deficiency” of a centralised organisation. Instead of a central committee, the Yellow Vests see themselves as a decentralised protest movement – not as a political party.

Adding to the confusion was the fact that, ‘a 2019 CNN story – typifying many stories of the corporate media – claimed that a study revealed ‘50% of Yellow Vests believe in a global Zionist conspiracy’ (66). On statistics in general, US economist Aaron Levenstein once said, ‘statistics are like bikinis. What they reveal is suggestive, but what they conceal is vital’. On the CNN story, Wilkin notes that this story has never defined the Yellow Vests movement. On the political orientation of Yellow Vests, Wilkin perfectly outlines, ‘to be clear, the Gilets Jaunes are neither syndicalist nor anarchists. Rather, they have embraced practices and ideas which are most strongly associated with libertarian left-wing ideologies’ (70).

Perhaps one might see the Yellow Vests as a true indicator of a progressive populist protest rather than a social movement. As such, the Yellow Vests have the intention to focus on action. This public action is shaped more by a collective moral outrage against neoliberalism than a true commitment to a particular political ideology. Beyond that, the Yellow Vests do not have a kind of Lenin-like revolutionary theory that shapes and directs its actions. Instead, the Yellow Vests have embraced a somewhat ‘libertarian idea of direct action, mutual aid, cooperation, and to a large degree – action established by consensus where possible’ (83).

This includes an idea put forward by French philosopher Rousseau who wrote, ‘the English people thinks it is free; it is greatly mistaken, it is free only during the election of Members of Parliament; As soon as they are elected, it is enslaved, it is nothing’ (85). UK leader Boris ‘Let-the-Bodies-Pile-Up-High’ Johnson testifies to this point. Rejecting this, the Yellow Vests also reject the conservative hallucination of a so-called charismatic leader. Set against this is the fact that the Yellow Vests movement – up until now – has cut down any development into the direction of leadership very quickly and very successfully.

While not being able to rely on something like Boris Johnson’s highly supportive Murdoch press, the Yellow Vests have very little capacity to frame its story and actions in the mainstream media. Framing the media narrative is something Boris Johnson can do to perfection. Somewhat similar to Johnson, Macron’s political party carries on with the neoliberal agenda and language of law and order, hierarchy, and the xenophobia of anti-migrants sentiments. While this assured Macron’s and Johnson’s election victory and Brexit, something like that has never been part of the Yellow Vests. As too many rallied behind Brexit and Johnson, the Yellow Vests emerged as a true and very popular protest movement against the current political system and the political parties of the establishment.

Wilkin’s most insightful, empirically based, and exquisitely written book ends with the statement that the ‘very presence [of the Gilets Jaunes] is an affront to the neoliberal order [and] the French state’ (106). Furthermore, the Yellow Vests truly embody a very popular working class movement in opposition to the prevailing neoliberalism. Simultaneously, the Yellow Vests can also be described as representing a very significant sector of the French society. These are the people whose lives do not fit neatly into the prevailing ideology of France’s President.

In the end, Yellow Vests suffer from several problems. They are a movement that remains hard to categorise within established ways of thinking. It lacks a powerful voice other than the voice it can muster at protests. As a consequence, journalism, tabloid-churnalism, right-wing and corporate media aligned to capitalism’s prevailing hegemony of neoliberalism had a field day in creating an anti-Yellow Vests perception. Wilkin’s astute and utmost delightful book presents a successful counter-argument that straightens the record by presenting an astute and research-based illumination of what the Yellow Vests truly are.