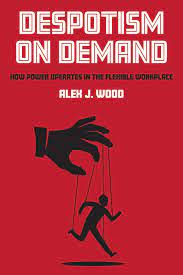 Alex J. Wood
Despotism on Demand: How Power Operates in the Flexible Workplace

Despotism on Demand comes with the well-deserved praise of two seminal scholars in the field of industrial sociology – Michael Burawoy and Judy Wajcman. Wood presents an exquisite study of today’s flexible workplace. His discussion and insightful analysis are based on two workplaces that he (for some reason) calls ‘ConflictCo’ and ‘PartnershipCo’ (19). Yet, it becomes increasingly apparent that we are – most likely – dealing with Walmart in the USA and Walmart’s UK subsidiary ASDA (20). His very own article ‘Networks of Injustice and Worker Mobilisation at Walmart’ (2015) says as much. The two case studies presented in the book has lessons to be learned that reach far beyond Walmart.

At least in hospitality and retail, the global service industry is moving into an ‘on demand’ and ’24/7′ economy where ‘jobs are fragmented into tasks, or broken up into gigs’ (1). In some cases, this leads to the appearance of faked ‘self-employed workers’ (1), which in reality means that workers are solely dependent on corporations like Uber. This determines their everyday work. Other workers are kept on so-called flexible contracts with ‘high insecurity as a result of flexible scheduling [which occurs] within a new temporal order’ (1) deliberately designed by management. The much-trumpeted ‘work-life balance and well-being (1) becomes a mere ideology – often instigated to make human resource management look good.

In the USA and the UK, ‘between a sixth and a fifth of employees experience precarious scheduling [with] little control’ given to workers (2). Two factors are relevant for the emergence of these flexible scheduling regimes that result in what might best be called “flexible despotism”. Firstly, with the deliberately engineered decline of trade unions, a deterioration of collective bargaining that previously protected workers. Secondly, since the electoral triumph of neoliberalism that began with Ronald Reagan in the USA and Maggie Thatcher in the UK in the 1980s, the near-global application of Hayek’s quasi-religious catechism of neoliberalism created ‘shifts in legal and normative regulation’ (p. 2). The ideology of neoliberalism sells this as deregulation. In reality, it is a version of pro-business re-regulation that systematically disadvantages workers.

To a large extent, flexible despotism is based on managerial scheduling power. This semi-dictatorial scheduling power, as well as flexible despotism, is ‘beginning to spread into conventional sectors of the economy’ (3). In 2016, ‘an astonishing 37% of US workers knew their schedule only a week or less in advance, and 17% found out about their schedule only one day’s notice or less’ (4). This makes a mockery of work-life balance. Worse, 63% of workers in the USA’s 80 largest retailers have experienced ‘variable schedules’ (4). Overall, about ’20 million US workers and 40 million European workers currently experience precarious scheduling’ (5) – 60 million workers.

Perhaps since the dawn of capitalism, ‘flexible working time [has been] a source of control’ (6) used by managers, supervisors and overseers. Yet, capitalism also ‘generates a structure of antagonism between capital and labour’ (7). Because of this and the despotism that often comes along, workers’ resistance against the despotic power of management comprises ‘hidden resistance [which] includes working slowly, feigned ignorance, sabotage, and pilfering, along with humour and gossip aimed at management’ (7). In short, it creates organisational misbehaviour.

In regimes of flexible despotism, ‘control is achieved through modern electronic surveillance technology [creating a] panopticon in the workplace’ (13). But flexible despotism also means that ‘discretionary control’ (15) shifts from workers towards managers. In some cases, this has also led to the emergence of macho management, which one worker expresses thus – ‘if the supervisor doesn’t happen to like him, he can lose his overtime for a week or forever’ (p. 15). This is flexible despotism – internally. Externally, flexible despotism means workers need three cards: a company discount card, a state-aid card to access social benefits, and a credit card (p. 60).

With flexible despotism comes ‘verbal abuse and bullying by management, favouritism [and management’s ability] to retaliate against workers who attempt resistance’ (27). Some of these things mirror working life in Blake’s Satanic Mills (1804). These early factories and workshops were based on ‘the military, autocracy, slavery and prisons’ (p. 29). Then as today, it means that management holds ‘autocratic power over…workers like a private legislator’ (p. 29). Company internal rules via managerial legislation reflect what HRM calls “HR policies”. It shows what these “policies” truly are: unilaterally installed management rules that favour management – not workers. The internal policies are based on the ideology of deregulation that makes the state step back and, worse, remove protection for workers. Meanwhile, this process gives management a free hand to rule over workers. The outcomes are flexible despotism.

This, of course, turbo-charges insecurity. None other than Friedrich Engels once wrote, ‘it was insecurity that made life worse’ (30). Worse, ‘a key determining [factor of digital fascism is] the ability of managers to secure control by punishing workers for transgressions [a fact that is only increased by] the effectiveness of surveillance’ (40). In the past, ‘union officials and well-trained union reps [were able] to protect workers from managerial discipline’ (42). Since the advent of neoliberalism, this has increasingly been removed; consequently, flexible despotism flourishes.

In a rare moment of truth-telling, some HR managers call this my way or the highway and FIFO – fit in or F*** off! In some cases, flexible despotism and the increased power given to managers can even lead to behaviours that begin to resemble the conduct of an ordinary Kapo employed by a German company (Siemens, Krupp, Mercedes-Benz, etc.) under the Nazi regime to make sure prisoners work. Today, flexible despotism comes to the fore when a ‘manager’s personal relationship with workers [become] dictatorial and abusive with routinely patronized, shouted at, and insulted employees, for example, calling them lazy, incompetent, stupid, and worthless’ (58).

The information technology Walmart is using is called – in the typical managerialist-Orwellian language, “My-Guide System”, appropriately re-labelled by working into ‘my-slave system’ (61). Most obviously, the CCTV cameras used to spy on workers are only installed ‘to protect [the company] against customer theft [yet, it created] a perception among workers of being constantly watched by management’ (62). Much of this is camouflaged through what the standard fair Managerialism has to offer. This is Managerialism’s infamous ‘open door policy’ (63), which turned out to be an ‘open door to the sidewalk’ (64) – reflecting the aforementioned FIFO.

Management controlled flexibility remains ‘a powerful mechanism [because management can use it to] arbitrarily discipline workers [and it can also be used for the] control of scheduling to punish workers’ (74). Managers can ‘simply cut a worker’s hours so that these hourly paid workers can no longer make ends meet…flexible discipline has other advantages for managers, in that it is impossible for workers to be certain that they were being punished or whether managers were genuinely responding to changing demand’ (74). Flexible despotism seems to produce a Kafkaesque nightmare for workers.

Meanwhile, the much-claimed opportunities for promotion also remain unreachable. There is ‘little opportunity for genuine mobility [and] very little likelihood of advancement into salaried management’ (78). Yet, these middle-managers remain the willing executors of flexible despotism. Virtually nobody dares to challenge these mid-level corporate apparatchiks.

In short, many workers under flexible despotism ‘depend on the mood of the manager for their income’ (88) and try to organise their lives upon an ever-changing work schedule. And it is getting even worse, under flexible despotism, ‘scheduling is a zero-sum game; any benefits one workers gained [can be made by management to be] at the expense of others who, as a consequence, would receive either fewer, less stable, or less desirable hours’ (88). In short, flexible despotism plays out the entire evilness of the prisoner dilemma, learned helplessness and the Stanford prisoner experiment.

Combining extremely low wages and unpredictable work schedules with the macho-management of flexible despotism, one can understand why workers feel like they are being treated like a slave (105). It also makes one understand why there are ‘innovative workplace sabotage techniques’ (125). Sabotage is easy as one worker explains, ‘Oh look, I just dropped a jar of pickled onions – that is easily done’ (125). Much of sabotage centres around ‘purposefully damaged goods’, yet ‘these acts demonstrate that control … was neither complete nor all-encompassing’ (126).

The book finishes with a positive and a negative note. On the upswing, ‘there are limits to … control and resistance is possible’ (134). On the negative side is the high potential that flexible despotism might be turbo-charged by ‘algorithmic management’ (144), enabling platforms to control, rate, rank, and eliminate workers at will. In that way, ‘those with the lowest ratings are … deactivated – in other words, dismissed’ (144). Even better. Managers can claim that they are neutral administrators of an objective algorithm system, and it is the worker’s fault for receiving a low rating.

Overall one might say that management and despotism has never been an oxymoron. Since the days of Blake’s “Satanic Mills”, managerial regimes have been defined by despotism. This included the self-appointed “right to manage”. This so-called “managerial prerogative” also includes management’s use of time flexibility to domesticate, punish, discipline and torment workers. Today, the most advanced form of this is called “flexible despotism” as Wood’s utmost exquisite book shows pointedly. Then as today, workers depend on strong workplace organisations such as trade unions to defend themselves against the despotism of individual managerial and the despotic pressures of capital so well described by Marx all those decades ago. Trade unions remain pretty much the only organisations that can also protect workers from the next big managerial evil lurking just around the corner: “algorithmic management”.