Marx & Philosophy Review of BooksReviews‘It’s the Government, Stupid: How Governments Blame Citizens for Their Own Policies’ by Keith Dowding reviewed by Thomas Klikauer, Nadine Campbell 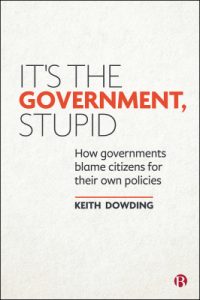 Keith Dowding
It’s the Government, Stupid: How Governments Blame Citizens for Their Own Policies

Ever since Bill Clinton coined the phrase ‘it’s the economy, stupid!’, people have been using this play on words, including political scientist Keith Dowding. In his latest book, Dowling focuses on governments and how they blame individuals for problems they have caused. To support his argument, Dowding uses empirical evidence to examine governmental responsibility in five areas: gun crime, obesity, homelessness, problem gambling, and recreational drugs, in the USA, the UK, and Australia.

In his preface, Dowding argues correctly that the current pandemic is a prime example of governmental responsibility. Individuals cannot be blamed for the virus, and the much-beloved market cannot solve the crisis. Instead, the coronavirus has destroyed the neoliberal belief that the individual is responsible, and the market is the best mechanism to solve problems. The first belief is that the free market is the panacea for almost all issues. However, letting the free market deal with the coronavirus has resulted in the needless deaths of thousands. The second belief is deregulation – ‘ending red tape’! What we need against the coronavirus is the exact opposite. We need regulations on social distancing, which facilities should be opened or closed, and so on. The coronavirus pandemic demands more regulation, not less. Take regulation away and chaos reigns.

Third, neoliberalism advocates less state – ‘no nanny state’! Take the state’s ultimate regulating force, the police, away, and the infected people will spread the virus. We depend on the police, the state and state-run hospitals. The fourth and final belief is privatisation. Neoliberalism prefers private health. Private healthcare for the rich is not working, as the USA shows. Americans pay more for health than other advanced nations do, only to get less in return. In short, the coronavirus has comprehensively destroyed neoliberalism’s belief-system. Virtually the same goes for its ‘cult of personal responsibility’ (preface, p. xii) as discussed in Dowding’s book. This is a cult that has been, in part at least, invented and sustained by corporate media. One of the key shortcomings of Dowding’s book is the exclusion of the role of the media (Smythe 1977).

Dowding makes a worthwhile argument when saying that free choice is a myth. Individual choice appears to be an ideology that covers up reality and blames the victims of well-targeted neoliberal policies. In other words, ‘if others manipulate our choices, then we lose some of that up-to-us-ness’ (p. 5). How this operates is relatively simple. Governments regulate social issues favouring business and pushing the ideology of individual responsibility to smokescreen what they do. Free choice provides a handy ideology to shift the blame onto the victims of neoliberalism. What Dowding calls ‘economic and social forces lead[ing] to firms manipulating people’ (p. 6), boils down to profit margins – a term Marx used but did not invent himself. In his book, Capital, Karl Marx (Marx 1890; cf. Gasper 2005:193) quoted economist T. J. Dunning who argued that with 10% profit capital will ensure its employment anywhere; 20% profit produces eagerness; 50% profit will create audacity; at 100% profit, it will trample human laws; and with 300%, capital will engage in crime. That is to say, if the profits are right – or there is what Managerialism names ‘shareholder value’ (Klikauer 2013), capital will kill. The case of the 100 million deaths caused by the tobacco industry demonstrates this (Benson & Kirsch 2010). Capital will do this until governmental regulation prevents it from doing so.

The relationship between neoliberal pro-business regulation – ideologically framed as deregulation by the apostles of neoliberalism and the corporate media (Smythe 1977) – and the deaths and pathologies it creates are also shown in housing policies where governments have done two things. First, they have largely abandoned social housing. Second, they have implemented tax incentives that lead those with money to … make it financially worthwhile to own properties and leave them empty’ (p. 7). In short, the four-decade-old and very deliberate neoliberal policies to give to the rich and punish the poor need to be concealed through very powerful ideologies – free choice and individual responsibility.

Of course, ever since the invention of propaganda – today labelled public relations (Bernays 1928) – and marketing (Smythe 1977) – many corporations and politicians know how to frame the idea of free choice so that voters and consumers make the right choice, i.e., a choice that benefits neoliberal politicians and corporations. In social science, this ideology is enhanced through rational choice theories (Abella 2008). Meanwhile, people respond to the manner in which items are described. This process is called ‘framing’. Frames can determine people’s choices. Advertisers, the corporate media (Fuchs 2017 & 2020) and governments know that (p. 12).

Crucial to understanding the role of neoliberal governments is the fact that they regulate markets. There is no free market. All markets are regulated. Every market depends on the government’s legal framework, and money is also regulated by the government. There simply is no market without government. As a consequence, ‘all market failure is government failure’ (p. 15).

Often, when the government fails, people die as in the case of the coronavirus pandemic. Mass death is not only created through incompetence but – as the USA shows – through gun violence. There is a reason why about 14,000 Americans died through gun violence annually while gun deaths are more or less negligible in the UK and Australia. The reason is not individual choice but the availability of guns in the USA. The ‘US easily outstrips all other countries in the world [when it comes to] the number of guns per head of population’ (p. 34) where ‘79% of mass shootings … involve weapons purchased legally’ (p. 28).

Death can also come from eating unsafe food. Based on governmental pro-business regulation, ‘food manufacturers deliberately add sugar, sweeteners, fats and salt to food’ (p. 46). Roughly 28% of people in Britain are obese, and 35% are overweight (p. 1). More likely than individual choice, pro-business regulation by governments dedicated to further neoliberalism is to be blamed because ‘mammals can become sugar dependent’ (p. 55). Governments have the option of banning sweeteners and could also ban ‘ultra-processed foodstuffs with no nutritional value’ (p. 58). But governments will not do that as long as they depend on corporate campaign funding for re-election which, in turn, depend on profits and therefore prefer governments that enable profits and deregulation.

Dowling also mentions the powerful corporate media (Smythe 1977; Fuchs 2017) that depend on advertising revenue and are happy to broadcast the free ‘choice [and] responsible people’ ideology (p. 62). For decades the media has told people their choice to smoke is good while reaping millions in advertising dollars. There is an interesting symbiosis between capital, media, and politics in which everyone except the ordinary consumer and voter to win (Klikauer 2016). The very same corporate media that depends on advertising from the fast and junk food industries also tout an ‘it is all genetics’ ideology even though ‘the increase in obesity since the 1980s cannot be put down to genetics [but the fact that] junk and manufactured food is cheap’ (p. 65) and profits are high.

The same goes for homelessness and the profits that can be made from building homes for the wealthy but not for the poor. Knowing this, ‘governments changed their housing policies [and] stopped seeing their role as providing affordable public housing for the poor’ (p. 69). Self-evidently, ‘removing rent controls pushes up the price of dwellings’, hitting the poor harder than the rich (p. 71). Dowding says, ‘in Australia, levels [of homelessness] increased by almost 5% from 2011 and 2016’ (p. 1). It simply defies logic to argue that 5% more people chose to live on the street every year. All these and other neoliberal measures create homelessness (p. 74). These are the deliberately engineered outcomes of a neoliberal policy that creates a housing shortage in which ‘the poor and the younger generations have systematically become further disadvantaged’ (p. 85).

Comparatively worse is the ‘gambling industry’ (p. 92) even though it is not an industry at all – in the conventional sense of producing things. In many cases, ‘gambling is a major source of revenue for governments’ (p. 95) that follow the neoliberal ‘no-new-taxes’ ideology. Upton Sinclair (1994) said, ‘it is difficult to get a man to understand something when his salary depends on his not understanding it’. As those who understand neoliberalism would know, ‘liberalising gambling created more problem gamblers’ (p. 110).

The converse argument can be applied to recreational drugs. In Australia, ‘the criminalisation of recreational drugs is a failed public policy’ (p. 114) as ‘Nixon’s war on drugs’ (p. 118) has been comprehensively lost. Even the police admit that their actions have had little impact on the drug market (p. 121). The same goes for the USA and the UK. Still, corporate media never grows tired of announcing yet another major drug cartel arrest. This kind of sensationalism keeps up the perception that the state is acting while in reality, the drug business carries on as usual.

The US alone spends $41.3bn annually to enforce drug prohibition (p. 127). Meanwhile, ‘drug legalization means regulating drugs (p. 128). Yet, it would surely mean that $41.3bn would be saved and crime would ease. The day alcohol prohibition ended; Al Capone went out of business. With recreational drugs, the same would happen. When drugs were legalised in Portugal (p. 129), it had many ‘positive effects’ (p. 130) – as one would expect. Legalising drugs also led to a ‘sharp decline in prices of drugs’ (p. 131). At the same time, Portugal did not sink into crime, violence, madness and bloodshed on the street – the opposite happened as the corporate media dutifully did not report (cf. Smythe 1977).