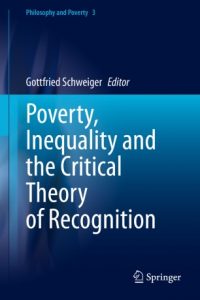 Edited by Gottfried Schweiger, the authors of this volume wrote on poverty and the Frankfurt School of Critical Theory’s latest endeavour: recognition theory. The Frankfurt School of Critical Theory began in the 1920s as a philosophical project that was neither Stalinist nor social-democratic. It may well be true that the French had a real revolution (1789) and the Germans had a philosophical revolution.

Working in the traditions of Kant, Hegel, and Marx, the Frankfurt School quickly established itself as a centre of progressive, philosophical, and sociological thinking during the 1920s. Soon, Theodor Adorno, Max Horkheimer, Herbert Marcuse became the leading figures. After their return to post-Nazi Germany, a young Jürgen Habermas joined them and became a leading figure.

Habermas marked the linguistic turn. Upon his retirement, critical theory moved towards an old favourite of Hegelian philosophy, namely recognition theory with Taylor’s Politics of Recognition (1994) and Honneth’s Struggle for Recognition (1995). Honneth argues that even before we engage in Habermas’ communicative action, we – as human beings – must first recognise each other as equal participants in the communicative dialogue. Failing this, four forms of negative recognition emerge (Klikauer 2016):

The poor are seldom recognised as equals and hence fall into the categories of negative recognition. In his introduction, Schweiger argues that recognition theory enables us ‘to understand, explain, and evaluate the world we live in’ (p. 1). He also argues that so far, recognition theory has been a ‘blind spot’ (p. 2) in research on poverty. What is needed is to bring ‘recognition theory closer to the material and economic reality of modern capitalism and the reality of billions of people living in poverty and suffering from it’ (p. 2). One is inclined to say; wherever there is capitalism, there is misery and poverty.

Because of the asymmetrical power relationships between the poor and those who cause poverty – capital and those who administer poverty – the state, the poor are misrecognised. Once someone is pushed into poverty through unemployment, for example, she or he often becomes de-recognised by friends, society, the state, and the media. As long as the poor exist, the three key assumptions of Honneth’s recognition theory come into effect. These are (p. 5):

Commonly, most authors of the volume agreed that poverty means ‘living on less than 60% of the equalised median income’ (p. 13). The 60%-rule describes relative poverty which is poverty relative to others. By contrast, there is also absolute poverty which can mean starvation (Madden 2000). For five million children, the latter means that they will die before reaching the age of five (p. 14). This is unlikely to change as longs as ‘global public policy is driven by the ideology of neoliberalism’ (p. 16).

To some extent, relative poverty applies to the working poor as well. Esther Neuhann shows this when arguing that ‘the exploiter does not recognise or respect the exploited person’ (p. 40). On absolute poverty, she emphasised that ‘a human only concerned with the search for basic material goods that secure the preservation of her body, is not recognisable as an equally free being’ (p. 51). She concludes with, the most ‘radical forms of dehumanisation (e.g. slavery…) do more than mistreat another’ human being (p. 52).

Bernardo Ferro argues correctly that ‘for Hegel, poverty [is] a form of social alienation’ (p. 59). As a consequence, ‘the elimination of poverty requires a more profound social transformation’ (p. 61) than those proposed by social-democratic welfare states. For Hegel, capitalist ‘markets must be regulated, in order not to degenerate into dangerous sources of inequality’ (p. 74). Hegel was not a communist because he supported the capitalist market; he was not an anarchist because he supported the Prussian state; and he was not a socialist. Perhaps, Hegel’s politics were more in line with a type of social-democracy favouring a Scandinavian style welfare state with a comprehensively regulated capitalist market (Klikauer 2013 &. 2015; Westphal 2019).

Like Gustavo Pereira, Hegel too would argue that poverty is damaging to a ‘minima of dignity’ (p. 89). Hegel might even agree with Dylan Rohr who correctly outlined that Marx and Engels saw a positive outcome in nineteenth century bourgeois capitalism, as it liberated peasants from the backwardness of rural life (p. 108). Today, Trump cements the backwardness which he is highly likely to abuse as ‘white trash’ (p. 108) while simultaneously promising to take on their plight. Donald Trump’s lies have already worked in 2016 when 72% voted for Trump (in mostly rural US states, the so-called red states) compared to 24% who voted for Clinton in 2016. The key differences between the red and blue states are that:

Virtually, the same can be said about the Coronavirus pandemic, which has hit the red states harder than blue states (Frey 2020). Undeterred, people in the red states have been labelled hillbillies and hobos. It is not surprising to find that Donald Trump utilises such feeling of neglect and abuse for his unsavoury politics. Abuse like this constitutes not only misrecognition but also disrespect violating Honneth’s four dimensions of respect (p. 134),

Beyond that, Schweiger distinguishes between non- and misrecognition, on the one hand, and disappointed expectations, enduring denial, lack of predictability, and long-term suffering, on the other hand (p. 145). Many of these are linked to the five ’causes of poverty [namely] labour precarisation; inter-generational transmission of disadvantages; dismantling of social welfare; public humiliation; and epistemic alienation’ (p. 157). The term “precarisation” refers to Deranty’s as well as Standing’s work (Deranty 2008; Standing 2016). Public humiliation and epistemic alienation, for example, is caused by corporate media describing the poor ‘as lazy, as welfare queens, as anti-social, as dumb’ (p. 158). More than anything, it is the corporate mass media that makes the poor believe that they are to be blamed for being poor.

Even worse than that is the fact that ‘2.2 billion people are living in multi-dimensional poverty’, as Renante Pilapil notes (p. 165). Corporate media in rich countries do a lot to engineer ‘misrecognition’ that asphyxiates the poor in ‘crippling self-hatred’ (p. 167). This also encourages the division between the global south and the global north and the failing of ‘interstate recognition’ (p. 183) which is the ‘misrecognition between states’ (p. 183).

A rather unexpected highlight of the entire collection is Monica Mookherjee’s “The Harms of Global Poverty as Misrecognition” in which she argues that Honneth’s recognition approach can lead to a ‘de-politicising’ (p. 209) of critical theory. She correctly says, ‘in opposition to Honneth, we believe that existing recognitive interactions are always structured by material conditions’ (p. 209) advocating ‘re-politicised psychology of misrecognition’ (p. 209). Rather appropriately, Mookherjee emphasises, ‘If critical social theory is to retain its aims of emancipation, it should struggle against its own tendencies to underrepresent forms of suffering which cannot be expressed through dominant terms and concepts’ (p. 209).

The very raison d’être of critical theory is the struggle to end domination and the struggle for emancipation. Emancipation is a term that is essential to critical theory but strangely absent from Schweiger’s volume on “Poverty, Inequality and the Critical Theory of Recognition”. To further the traditional goals of critical theory (Horkheimer 1937), Mookherjee suggests the writing of French critical theorist, Emmanuel Renault, when she argues rather insightfully that ‘Renault provides a productive antidote to the ambiguities of Honneth’s theory’ (p. 210).

Unfortunately, Schweiger’s edited volume on “Poverty, Inequality and the Critical Theory of Recognition” does not provide an overall conclusion to answer the key question of any conclusion, namely, “what can we learn from all this?” Still, the volume offers an interesting application of Hegel, Taylor, and Honneth’s recognition theory to the issue of global poverty. While the volume stipulates insightful debates on the mis-, non-, and de-recognition of poverty, it also issues a valuable critique of recognition theory. Mookherjee is correct when arguing that recognition might divert our attention away from the material conditions that create poverty. On a more theoretical level, her critique suggests that recognition theory exposes the Frankfurt School of Critical Theory to the danger of losing track of the raison d’être of critical theory which is ending domination and supporting emancipation – this remains precisely what needs to be encouraged given the current levels of global poverty and inequality.