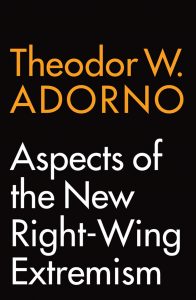 Gustavo Racy is a researcher at the Visual and Digital Cultures Research Center (ViDi), at the …

The transcription of Adorno’s reflection on the (then) new right-ring extremism arrives at the right time. Although the risk of falling into anachronistic readings is always present when we touch upon topics which we find precious to our own moment, Adorno’s lecture, published in print for the first time, warns us – also thankfully the afterword by Volker Veiss – that we are put in front of a very specific context in German history. Temporal displacements aside, however, Adorno’s talk provides an insightful reflection on the transformations of an ever-present political phenomenon, that of fascism, that help us understand the historical development of post-World War II right-wing extremism up to our own present. Afterall, as Adorno states right at the beginning of the text, his lecture does not represent an ‘attempt to present a theory of right-wing extremism […] but, rather […] some informal observations’ (1). Such observations are tightly connected to a previous lecture given in 1959, entitled ‘The Meaning of Working through the Past’, which, in short, developed the thesis that the tendency towards a continuation of right-wing extremism can be understood by the fact that ‘the social conditions for fascism continue to exist’ (1-2). These conditions relate primarily to the growing concentration of capital that downgrades certain social strata creating a sort of psychotic (though this is not Adorno’s term) relation between their own class consciousness and their actual material situation, while reinforcing socioeconomic privileges of other social strata. This noise between one’s own social consciousness and their material situation endorses a reactionary stance not against the system that actually caused them the downgrade that they are experiencing, but rather, against those who opposed this very system in the first place. It is as if this downgrade stratus said ‘if you had not opposed the current situation, everything would be the same and I would be still living in the same stable situation as I was in before you came’. The main target for the recrudescence of such reactionary response was, evidently, socialism as the main opposite to capitalism.

Looking at Germany, Adorno identifies how right-wing extremism may have transformed itself but remains, nonetheless, present through the same mechanisms which eventually led to its rise during the 1930s. This way, although nationalism, for instance, is deprived of substance by the political situation in which the freedom of movement within a nation is restricted by its integration into power blocs, it keeps on exerting a destructive character as it becomes a propagandistic jargon that sells to a vulnerable society a need which doesn’t really exist and which, perhaps, society itself does not entirely believe. The fear of dissolution of national borders, identities, language and culture retains nationalism as a dissolute entity that emerges as ‘an organ of collective interest groups’ (4). In other words, the same structure that led to the rise and consolidation of right-wing extremism, carries on serving to the dominant groups of every capitalistic society, which provides the ground for fascism to take a life of its own, as it relates to central economic interests that work towards the maintenance of groups of interest precisely at critical moments for the national economy.

The devices which Adorno identifies as promoters of a tendency towards right-wing extremism are also tightly connected to the need for an identification with the ruling system. This seems strikingly obvious, perhaps, but it is also fundamental for us to understand our very moment. There is a tendency to a certain type of unity, we may call it a ‘oneness’ (to invoke Pierre Clastres anthropology) that dresses itself up in the social fabric of modern capitalist society connected not only to the appeal for nationality and national culture, but to the idea of democracy. This, Adorno emphasises, is particularly important, since modern society has not yet developed democracy to its full extent, even though rhetorically, democratic regimes have become increasingly advanced. This points to a structural relationship between the economy and social movements in general, which finds support in the democratic regime, and it would be a mistake to equate right-wing extremism with economic development. There are broader objectively based cultural and even psychological phenomena that take place in the functioning of right-wing extremism. An unconscious desire for catastrophe stems from a socially constructed inability to see further ahead and a resignation towards the apparent impossibility of foundational change. A person who sees herself without escape from its misery longs for her own demise from the perspective of her social situation. Under the appeal of a national recovery, of this ‘oneness’ that may come into being once more, right-wing ideology finds a suitable audience amidst those who unconsciously long for the end of those who are deemed responsible for their downfall. This leads to yet another important factor for the expression of right-wing extremism: propaganda. This is the main medium through which political groupings, which outlast systems, find a stable ground for a naturalization of social reality. It does not matter whether people believe entirely in propaganda. On the contrary, the fact that they may not permits the creation of a delusional system that is manipulative towards the masses.

Yet, Adorno’s diagnosis is not wholesome pessimistic. It is fundamental to him that we work towards warning potential followers of right-wing extremism that the path they desire to take leads them to their inevitable doom. The appeal for sacrifice and, even, self-sacrifice, in the name of an order deprived of reason, and through the idea of the ‘soldierly man’, has survived the transformation of the political subjects embodied in the nation. Therefore, if the Germany of the 1960s was considerably different from the Germany of the Weimar period – and we may say that Germany today is considerably different from what it was in the 1960s – we are still able to track the changes and survival in and of right-wing extremism by investigating how the single, most important characteristic of liberal-democratic societies has been maintained along the decades; namely, the increasing concentration of capital and of social inequality of which Adorno speaks at the beginning of his talk. It is through this phenomenon that right-wing extremism seems to survive as the expression of national and international conflicts that unbalance the possibilities for self-expression and for a just and informed resolution of conflicts, wherein right-wing extremism, though openly anti-democratic, is precise in invoking itself as the sole true democracy by playing with the audience’s boiling point as it articulates its inability to express itself.

In short, right-wing extremism may be considered an essentially fragmentary phenomenon. It is a propaganda-fuelled phenomenon against democracy and socialism, presenting itself as the only democratic political manifestation and playing with the dissatisfaction caused by the ever-growing disparities generated by capitalism, all the while endorsing class interest and the maintenance of social order. Although historical differences must be cautiously pondered, the resemblance between these characteristics as not only ideological and psychological phenomena, but as an objectively political issue, and the times we live in is striking. And Adorno’s lecture comes forth at a critical time for warding off the many manifestations right-wing extremism that pop around, from Trump’s USA and Bolsonaro’s Brazil, to Salvini’s Italy and Orban’s Hungary, as well as beyond.