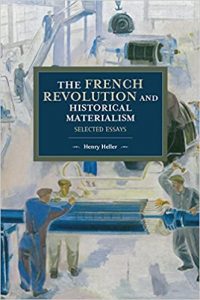 Dr. Jean-Pierre Reed is Associate Professor of Sociology, Africana Studies, and Philosophy at …

The French Revolution, a collection of articles and (review) essays previously published in Historical Materialism, is a must read. In it, Heller sets out to challenge the revisionist history associated with this historical event. What is at stake? The Marxist interpretation of the French revolution as a bourgeois revolution, a position that goes back to the work of Marx (among others, the German Ideology, Capital, Vol. 1, The Eighteenth Brumaire of Louis Bonaparte, The Class Struggles in France, 1848 to 1850) and Engels (in the Origin of the Family), and which gains serious scholarly recognition starting at the turn of the twentieth century with the work of French Socialist Jean Jaurés and through the late 1960s at which point under the intellectual context of post-structuralism and post-modernism and the already existent geopolitical context of the Cold War, the Marxist – historical materialist – interpretation is challenged, first by French scholars (prominently François Furet representing the cultural turn) and subsequent to them, Anglo scholars (deniers of its historical impact). All in all, Heller provides us with an insightful and astute account of the historiography on the French revolution in the service of demonstrating the significance of historical materialism as an interpretative framework for the event in question. He does this in an expository way and in an elucidating back-and-forth manner with his critics (William Beik, David Parker, and Stephen Miller), whose essays are also part of the collection.

At the centre of the revisionist debate are some obvious but important questions: Was the bourgeoisie a class-in-itself and/or a class-for-itself at the time of the revolution? Is there any historical evidence that can support the claim that capitalism and its representative class actors existed at the time of revolution? Revisionist accounts, Heller shows, deny both the existence of a bourgeois class actor and the history of capitalist development that would have given rise to it. Historical records show, Heller further conveys of the revisionist history, that the absence of a capitalist infrastructure in seventeenth century France undermined the development of the bourgeoisie into a class-in-itself and class-for-itself capable of overthrowing the ancien régime. These latter factors imply that class conflict as portrayed in Marxist accounts was non-existent since the actors implied in the scenario of class conflict were also, in essence, non-existent, given the absence of a fully formed (or even despite an emergent) capitalist infrastructure. State sanctioned property rights – ‘seigneurial rights, venal offices, tax farms, noble titles, and bonds sold by office holders, municipal magistracies, and provincial estates’ – similarly got in the way of capitalist infrastructural development (112). If the bourgeoise was in fact a “viable” actor in the socio-political context that resulted in the outbreak and overthrow of the French monarchy as one of his critics contends, they played ‘a relatively small role’ (84). The real struggle between contending forces was not between the monarchy and emergent entrepreneurial middle classes. It was, so revisionists claim, between the nobility and the monarchy, if not between the monarchy and a reactionary peasantry. Revisionist accounts, to succinctly summarise, have ‘questioned the link between’ the bourgeoisie and capitalism, ‘cast doubt on the strength of both capitalism and the bourgeoisie … sought to deny the meaning of the terms,’ and ‘questioned the significance of the revolution to French history, which, it is claimed, is a history of continuity rather than change’ (127).

Heller’s response to revisionist contentions is to acknowledge, as the revisionists do, that the seventeenth century was indeed a period where the development of the French bourgeoisie was undermined on account of state practices that bolstered the logic of a feudal system. Yet, Heller further conveys, their undermining was not an indication that they lost momentum entirely from their emergence in the sixteenth century. The key to making sense of their influence is connected to what Marx referred to as primitive accumulation. A type of accumulation that comes in the form of rural capitalism and the social, economic, and technological changes that are correspondent to it. To make sense of this latter phenomenon that revisionist accounts readily dismiss, Heller conveys, one must consider the rationalisation of agricultural practices and the emergent wage system associated with a coming-into-being new mode of production and how these factors were connected to the material interests and the development, if in a limited way, of an emergent rural capitalist class and its influence (on agricultural practices, see 122-23). Yes, the seventeenth century was not as conducive to their development, as it was the case in the sixteenth century. The aforementioned feudal-state sponsored property practices are a key factor that largely explains their retardation. Yet, shifting agricultural and land practices in place – and despite ‘increased taxes and rents’ – kept them in a holding pattern that made it possible for them to sustain profits and to re-emerge and gain momentum in the eighteenth century, a more favourable context of opportunity to their material and political interests (122).

Heller also maintains that their influence in the unfolding of revolutionary situations is easily found in the discourse of the time. The fact that the artisan classes frequently engaged in strikes is also telling, not to mention the role finance capital played in the expansion of external commerce and development of industry before and after the overthrow of the monarchy. The reality that a language of class was present at the time of the revolutionary crisis and soon thereafter tells us something about the transformation processes already in place. The discourse against and for the revolution – as found in the language of key figures and journals – for example, was often consistent of warnings against bourgeois hegemony or calls for alliances with them against the monarchy. It not only proved the presence of a class actor, it also projected inchoate class interests that eventually matured and took hold of French society. Artisan strikes were in effect Luddite attacks against the imposition of an emergent economic regime that was displacing them through technological innovation, and the surest indicator of class conflict in the revolution. Regarding finance capital, Heller notes the following: ‘bankers were clearly involved in the development of both mining and metallurgy as well as large-scale commercial capitalism, the latter being the most dynamic sector of the economy prior to the revolution. It was in this sector in particular that industrial enterprises developed prior to 1789. The revolutionary period further advanced the development of capitalism and the development of a capitalist class’ (236).

The debate over whether the French revolution was a bourgeoisie revolution is likely to continue as past accounts are scrutinised, historical records come to light and are interpreted, and new insights develop from paradigm shifts in academia. Heller’s The French Revolution, however, gives credence to the usefulness of historical materialism, and in a significant way settles the score, to date, between liberal and radical interpretations. In this reviewer’s opinion The French Revolution has set the standard for Marxist interpretations for years to come. For this reason alone, it should be read.