Marx & Philosophy Review of BooksReviews‘The Class Ceiling: Why it Pays to be Privileged’ by Sam Friedman and Daniel Laurison reviewed by Thomas Klikauer, Norman Simms 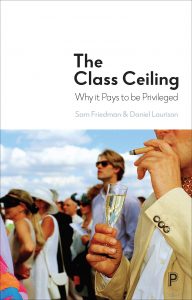 Sam Friedman and Daniel Laurison
The Class Ceiling: Why it Pays to be Privileged

Ever since investment billionaire Warren Buffet told us, ‘there’s class warfare, all right […] but it’s my class, the rich class, that’s making war, and we’re winning’ (Stein 2006), we know three things: firstly, there is a class system under capitalism; secondly, there is also class war between the two classes – the working class and capitalist class; and thirdly, Mr Buffett’s capitalist class is wining. Karl Marx followed socioeconomic determinations to analyse class. Put simply, those who are forced to sell the only thing they have – their labour – are set against those who buy labour – the capitalists. The advent of management has not change this equation. Managers are no more than the agents of capital.

Sociologists, however, have made up three classes – the upper, middle and lower classes. Unlike Marx, these are determined through three elements: income, education and social status. In their book The Class Ceiling – not to be misread as The Glass Ceiling – Sam Friedman and Daniel Laurison follow a sociological, rather than Marxist framework, for understanding the concept of class. Their book comes at a time when ‘inequality […] has mushroomed’ (7) and ‘rates of absolute upward mobility have begun to decline’ (8). The authors see ‘elite occupations earning US$60,000 annually and working-class occupations US$20,000’ (11) – US$60,000 translates roughly into AUS $40,000. Meanwhile the average Australian earns $48,360 per year (www.abc.net.au). In other words, the average Australian has an elite income, according to Friedman and Laurison. At first glance this might sound great for Australians without the purchasing power parity (PPP) which makes income rather relative. An easy way to understand PPP is the Big Mac Index. A Big Mac is rather expensive in Switzerland but people earn a lot and can afford a Big Mac. In Egypt, by comparison, a Big Mac is really cheap but people’s wages are so low that they can hardly afford it.

Of course, if one is part of Egypt’s working class, a Big Mac is even more unaffordable which in turn might not be a bad thing for your health – not just in Egypt. Still, ‘only about 10% of people from working-class background […] traverse the steepest upward mobility path’ (12) – in other words, 90% do not. Perhaps one of the key findings of Friedman and Laurison’s empirical study is that ‘class origin shapes who you are in ways that a simple change in circumstances – having more money, a university education or a better job than your parents – will not necessarily erase’ (17).

In addition, ‘working-class people […] face acute barriers “getting in” in the first place […] top firms eliminate nearly every applicant who did not attend an elite college or university’ (19). Study after study has shown this. At times your address alone is a barrier, at other times it is simply your name, at other times it is your degree or your ethnicity. A well oiled white heterosexual man called Donald Trump with an MBA from one of America’s best business schools, Wharton, has a better chance than the black lesbian in a wheelchair with a business degree from Bronx Community College living in the Bronx. She will not make it. Donald Trump did. Hence the state we are in. Despite this, one should not fall into the trap of ‘the fallacy of individualized explanations’ (23). Social mobility is not about individuals but about class.

Friedman and Laurison’s ‘how to measure social mobility into elite occupations’ (30) shows clearly how this works for the upper, middle and the lower classes. In the UK, for example, ‘privileged origin people are about 12 times more likely to be doctors as those from working-class backgrounds’ (34). Worse, ‘privileged-origin people without a degree are more than twice as likely to reach a top job than working-class people without a degree’ (38). It still gets worse, ‘top jobs in the UK [are] the reserve of not just the privileged but a particular white, heterosexual, able-bodied, privileged man’ (39). Eton and Oxford graduated Boris de Pfeffel Johnson is a fine example of this elite rule.

While many have been led to believe that there is equal opportunity and that hard work will get you to the top, Friedman and Laurison destroy these myths one after the other. They found, ‘when people from working-class origins have the same level of education as their advantaged colleagues, they still earn significantly less […] it demonstrates that educational attainment, and even higher educational attainment, is not the great equaliser’ (62). Schools and universities are not equalisers. If anything, they are stratifisers – they stratify society (Bowles and Gintis 1976). Their grading systems, for example (0-50 = fail, 51-64 = pass, 65-84 = distinction, and 85-100 = high distinction) are a dead give-away. It further advantages those who have private tutoring. It disadvantages those whose father is a bus driver and mum is a nurse. Of course, corporate media will always highlight the rags to riches myth by focusing on individual cases that can be shown on TV and in Hollywood movies. These individual cases exist but what they are is just that: individual cases. According to Friedman and Laurison, they are the exception, not the rule. Ruling is done by the elite. They follow the Golden Rule – those with the gold rule!

Once employed, ‘those from working-class backgrounds are getting paid less for doing the same work (that is, for doing jobs at the same level, same company and same department)’ (71). Inside companies, ‘the privileged dominate the upper echelons’ (76). In companies with absentee-increasing and productivity-decreasing open-plan offices, such ‘egalitarian organisation of space masks a very hierarchical career structure’ (79). This leads to a further conundrum.

Unlike working class children, a senior commissioning editor in a powerful corporate position openly admitted that those with a ‘privileged backgrounds […] can always get bailed out by Mum and Dad […] if you’ve got nothing to fall back on, and you’re out of work for three months, you’re fucked’ (101). Inside companies, the cushioning of upper class people continues through what is called mentoring (Klikauer 2019: 80). Supported like this, such ‘sponsored mobility individuals reach the top largely because they are selected by those already in senior positions and carefully inducted into elite worlds’ (109). In short, ‘sponsorship from above tends to advantage the privileged’ (118).

In addition, upper and to some extent middle class candidates also have another advantage. ‘In elite occupations, it’s not just what you know that matters, but who you are and how you present yourself. And that, in turn, shapes what you are perceived to know’ (133). Elite education gives them the self-assurance to present themselves with confidence. During years of elite training they have become very good in creating the perception that others perceive them to know it all. Boris Johnson is a fine example of both – elite education and making sure that others perceive him as someone with expertise.

Friedman and Laurison also found that ‘working-class children internalise negative feelings of self-worth that lead them to reject the education system [this often leads to] self-elimination from the education system [which] is rooted in an unconscious estimation of their objective probabilities of success’ (173). And even if they make it to the top, such ‘mobility [often comes with] emotional difficulties. These individuals routinely reported battling feelings of insecurity and inferiority in the elite workplace’ (179). Elites who ‘are drawn from a narrow background’ (189) have no such qualms.

Friedman and Laurison conclude that ‘it pays to be privileged’. There is a ‘class pay gap [and] a powerful and previously unobserved […] inequality’ (209). Furthermore, ‘people do not necessarily have an equal capacity to cash in their merit or realise their talent’ (210), hence the widespread ideology of equal opportunity, the clean slate, hard work pays, etc. with which we are made to believe. Furthermore, ‘instead of economic help it is often social – in the form of informal sponsorship’ (211). It comes as networking.

Overall, Friedman and Laurison’s empirical study combines economic statistics with in-depth interviews. It provides an exquisite insight into the existence of class society. Despite – or perhaps because of – ideologies such as we all live in a middle-class society and the common hallucinations that everybody has the same chance in life, effort pays, hard work will get you to the top, rags to riches, etc., the reality looks rather different when examined empirically. Again, what is important here is not the individual but the structure. The structure of class societies conspires against those from middle and working class backgrounds to an every increasing magnitude.