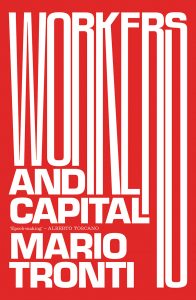 From the heights of May ’68 to the tragedy of the Prague Spring, the 1960s were a tumultuous decade. During these times in Italy, an entirely new form of communism was born, operaismo, and its Bible was Mario Tronti’s Workers and Capital. This book has now been translated into English, like a message in a bottle finally getting ashore. Tronti aimed to develop a working class science able to open up a new course for revolutionary action within a deadlocked political landscape. Against the political pacification of the working class in the welfare state, Tronti stressed that the only way to gain real insight into bourgeois society is to reside inside of it as its enemy. Capitalists, professional economists and even trade unions might in unison announce that, for instance, wage decreases or unemployment are an inevitable effect of the objective movements of the global labour market, but the working class scientist knows this to be a mystification. By observing the concrete, lived experiences of workers and their day-to-day struggles, she knows that the current condition is not the outcome of a supposedly untouchable logic of capitalist development, but of a series of concrete micro-struggles waged between workers and capital. The working class scientist has her ear close enough to the ground and sufficiently distrusts economic professionals to see that decision to, for instance, move factories abroad is not just a matter of business accounting. It is a political tactic within a struggle against working class activism. ‘If the workers demand too much, we will leave,’ is the eternally recurring refrain. Seen from the working class perspective, what presents itself as an economic law of nature transforms into the fragile and unsettled outcome of an ongoing struggle. Tronti’s Workers and Capital elaborates upon this perspective in a series of essays written over several years. As explaining the argumentative development of the whole book would be too ambitious, let us rather outline three central theses.

(1) The primacy of working class struggle in capitalist development. Traditional accounts of capitalism usually explain evolutions within capitalist development through the logic of capital itself. This puts the initiative on the side of capital and explains working class action as a reaction to the self-propelling movement of capital. Tronti turns this approach on its head; he reminds his readers that class struggle, not capital, is the motor of history. Capital evolves because the working class forces capital to react to its continuously changing tactics of resistance. Tronti, for instance, explains the transition from manufacture to large-scale industry not as a process of self-rationalization performed by capital, but as a response to working class struggles for a shorter workday. Exploitation in manufacture depended on lengthening the workday to extract more absolute surplus value, so legal protections like the eight-hour workday significantly affected capital’s capacity to sustain the rate of exploitation. Capitalists subsequently shifted their attention to machinery and boosting labour productivity as a means of compensation. In this way, large-scale industry was born. If working class resistance hinders the extraction of absolute surplus value, capitalists must instead focus on generating relative surplus value. They maintain the rate of exploitation by enhancing the pace of work during the limited hours workers are available. The specific form capitalist power takes is hence an effect of the resistances the working class develops against its exploitation.

(2) The working class inside and against capital. Before the production process even starts, the worker already confronts capital on the labour market. He is free to employ his labour-power as he likes, but, to survive, he must sell it to the capitalist. This exchange does not take place on equal terms: the worker produces more value when he is put to work than his labour-power is worth. Because the worker needs his employment to survive, he has to undersell his labour-power, handing a surplus of value over the capitalist. The value of labour-power, expressed in wages is hence determined by the costs of sustaining the workers’ survival. The value they generate in the production process however exceeds this level. Workers thus introduce more value into the capitalist system than they receive in return. Exploitation and class conflict are inscribed in the worker/capitalist relation from the very start. No amount of distributive justice or welfare provisions will ever be able to amend this constitutive imbalance. From the very moment workers are obliged to reduce themselves to commodities, their interests are opposed to capital.

Once the deal is struck however, workers become part of the capitalist machine. As concrete individuals, they might be living human beings, but as the commodity labour-power, they are a variable in the capitalist’s business model. They must hence conform to the requirements of the specific composition of capital into which they are enlisted. If they work in a manufacture, they must train as skilled artisans; if they work in large-scale industry, they must adapt to the assembly line. Capital takes upon itself the responsibility to organize the working class in a particular fashion to make it optimally serve its interests. The working class is hence not only in conflict with capital, but also forms a crucial part of capital. This is where Tronti coins the now famous slogan dentro e contro (‘inside and against’): the working class is simultaneously a constitutive part of capital and its worst enemy. It resists its own capture and exploitation within the capitalist machinery. The point here is not to fear or hope, but only to use this situation to look for new weapons.

(3) Capital breaks not at its weakest link, but where working class organization is strongest. Tronti objects to Lenin’s claim that the chain of capitalism breaks at its weakest link. Instead of locating the end of capitalism at the weak points of capital itself, Tronti stresses the political strength of the working class. Considered from its own perspective, capitalism can keep going indefinitely. Where the working class however effectively organizes itself as a collective political force, cracks appear in the capitalist façade. That capitalism, for instance, faltered in 1917 in Russia had, for Tronti, less to do with the weaknesses of capitalism than with the power of the Russian workers. For his own time, Tronti focuses on the factory as the dominant site of struggle. This place provides ample opportunities for resistance, because factories necessitate a high level of social cooperation among workers and subsequently a strong sense of collective identity and solidarity. Capital produces its own gravediggers by facilitating working class self-organization. During the 1960s, Italian factories were regularly disrupted through targeted actions summed up under the header ‘autoriduzione’ (‘self-reduction’). Workers would not organize through trade unions and official strikes, but would separately establish small, temporary disruptions of the production process that would eventually, through cumulative effects, block the entire factory system. Through targeted forms of deliberate non-cooperation, workers could autonomously determine the production rate. The factory was the key institution where capital subordinated labour-power to the generation of surplus value, so blocking this process undermined the entire capitalist machinery.

Contrary to some later post-operaisti, Tronti stresses the importance of party leadership, but he gives this idea a new twist. He emphasizes that the party only determines the tactics of working class struggle, whereas the working class itself is responsible for the overall strategy. On the level of day-to-day struggle, decision-making institutions like trade unions and political parties are a practical necessity. They should not however take charge of the long-run organization of working class struggle. As the autoriduzione example shows, the working class is perfectly capable of organizing itself politically. To maximize its effectiveness, it however makes use of established parties and unions. The party is hence still an important instrument for class politics, but it is nothing more than an instrument, useful in some circumstances yet disposable when the situation calls for it. Just like a snake sheds its skin when it grows, the working class sheds its façade of political parties and trade unions along its development.

Reading Tronti’s Workers and Capital 50 years after it was written can be quite a challenge. Verso has hence supplemented the book with an illuminating introduction by Steven Wright and an essay by Tronti from 2009 where he himself reflects on the historical significance of operaismo. Today, we not only face a completely different form of capitalism, but also the organization of the left is in no way comparable to 1960s Italy. Soviet communism has collapsed, we can only dream of the level of working class integration provided in the traditional welfare state and the political left is repeatedly divided between mutually inconsistent social movements. In these circumstances, some of Tronti’s intuitions, like his insistence on factory struggle, his suspicion toward trade unions or his condemnation of the welfare state, no longer seem viable. The point is hence not to repeat Tronti’s theses as dogma. They were timely interventions in a political terrain that is no longer ours. It is more interesting to read Tronti’s book as a message in a bottle about how to do social theory today. We should read Marx and his followers not as philosophia perennis, a set of eternal insights into the nature of an unchanging beast named ‘capitalism’. The Marxist canon is rather a collection of historically situated interventions that reveal an ever-shifting and fragile social balance of forces. By reading Marx anew, Tronti reminds us of the joy we experienced when we read Marx for the first time, that first instance when one revels in having unmasked the pretences of capital to reveal the real struggles underlying the seemingly peaceful development of the free market. One experiences a certain sense of delight in seeing the world afresh through Marx’ working class perspective. Tronti reactivates this spark that made Marx so appealing in the first place. The ultimate message we can henceforth pass along from reading Workers and Capital is that the philosophers have only tried to deliver the definitive version of Marxist orthodoxy, in various ways. The point, however, is to keep reading Marx for the first time.