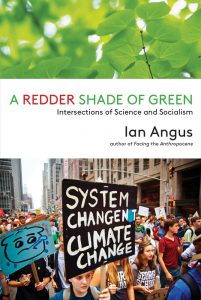 Ian Angus
A Redder Shade of Green: Intersections of Science and Socialism

A Redder Shade of Green is one of the more grounded books I have encountered this year. Ian Angus’s concerns are earthly, practical, and immediate, all of which are virtues given how his eco-socialism stands in stark contra-distinction to neoliberal ecological reasoning, an ideology that is both deeply entrenched in state institutions and international agencies as well as abstracted away from the present and coming harms of climate change caused by capitalist production. He seeks to persuade interested but unconvinced naturalists that capitalism is not immutable (and so offers motivation for their activism) while concurrently noting how capitalist explanations for, and solutions to, climate change are upside down. Together these points motivate the need for alternative frameworks like eco-socialism. As he writes, “there can be no true ecological revolution that is not socialist, and no true socialist revolution that is not ecological” (7). While some might see this type of statement as limited and partial, the spirit of it is arguably true. Through tackling alienation from nature, Angus’s book is a credit to Marxian polemics.

Angus’ collection of punchy chapters traverses several debates, genres, and audiences, though the common theme is to promote “a careful and deliberate synthesis of Marxist social science and Earth System science” (9). In broad strokes, there are two arcs to this project. The first is an open compelling invitation to naturalists to joint cause with revolutionaries at the confluence of scientific and social literacy. The second is to provide a set of plain counterarguments to the everyday reactionary talking points that pollute discussions about social and environmental concerns. Here one finds attention to how those in the Global South will bare the brunt effects of neoliberal ecological reasoning, effects that are especially pernicious given that this kind of reasoning positions Southern people as unfortunately falling victim to the growth imperative supposedly required to save them from general immiseration. Programmatically, the goal is to “build red-green movements” (7) capable of producing “a society of good ancestors” (179). By this he means giving “top priority to preserving our planet’s life support systems, to repairing the damage that has already been done, and to ending the gross inequality and oppression that define our world today” (179).

To elaborate upon the argumentative arcs, in the first portion of the book Angus advocates for a straightforward Marxism rooted in scientific literacy. This involves some intellectual recovery like disputing claims that Marx was not interested in natural science and hence the appropriateness of confining the application of historical materialism to human societies (15-16). Angus foregrounds Marx’s interest in chemistry and agriculture. Narratively, this is conveyed by attention to the extended presence of the chemist Carl Scholemmer in Engels and Marx’s circle of collaborators and correspondents (17-25) as well as their esteem for Darwin’s anti-essentialism and anti-teleology (28-41). In my experience, the second case is better known than the first, although historians of Marxism are much better positioned to judge their respective degrees of influence. Independent of that assessment Angus’ point is to connect nature and history to show that they coherently “comprise a totality” (Angus quoting Paul Heyer, 44). Effectively, Angus argues that when this totality is neglected, nature and human societies become much more vulnerable to exploitation and so are less able to mount a coherent counter-offensive.

The second arc has a range of targets. Some barbs are directed at Marxists who misunderstand climate science. Others are directed at neoliberal ecologists who think we can purchase our way out of global warming. But the most important targets are the argumentative tropes that are present within international institutional policy statements. For instance, the racist ‘too many people’ argument. He suspects that this “overpopulation orthodoxy” (99) is used to thwart poor racialized persons’ aspirations for material improvements in their lives by presenting it as guaranteeing increases in emissions. In this line of reasoning, it would be a tragedy if Southern persons acquired the same kinds of provisions or replicated the living standards found in the North. Along the same lines, Northern countries cannot take more migrants as this would simply create more people producing more emissions. Accordingly, the rhetoric is “stay away and stay poor” (101). Effectively, this kind of conservative-Malthusian politics presents an argumentative sleight of hand where “‘Green’ became synonymous with population control for the third world and personal behaviour change in the North” (105). His policy recommendation is to reset environmental politics to the spirit found in the 1960s in books like Rachel Carson’s Silent Spring and Murray Bookchin’s Our Synthetic Environment (103-106). Among many things, this decade was marked by issues like race and imperial wars being taken to task more readily by environmental activists.

In addition to these programmatic elements, Angus wants to position eco-socialism as a viable and credible participant in evidence-based public policy discussions. For him, a preliminary step requires returning to Wissenschaft, that being structured and systematic inquiry. In this guise, environmental studies can provide “a twenty-first century rebirth, if you will, of scientific socialism” (9). A return to Wissenschaft can take the insight about profit-seeking offloading of the costs of large-scale production onto the poor and marginalized and extend it to the environment more generally by recognising, for instance, that “pollution is not an accident, and it is not a ‘market failure.’ It is the way the system works” (171). There is an undercurrent to this portion of the text. In arguing for scientific socialism, Angus seeks to remind us that the adjective signals a method of analysis and politics that must be understood as different to utopian socialism which simply deploys abstract moralism. I am less convinced on this point. Let me explain.

I was lecturing at a university in Trinidad and Tobago when I received this book. While not emblematic of life in the South, Trinidad and Tobago is the emblematic petro-state, rife with climate change denialism promoted by state officials. Between the sector itself and transfers from it, oil accounts for nearly three quarters of the national economy. And notwithstanding a rhetoric of regional solidarity around Caribbean civilization, in the wake of the devastating 2017 Atlantic hurricane season there was little to no discussion about transforming the economy in conjunction with deep-decarbonization imperatives. Nor are there any efforts to refit Trinidad’s manufacturing base to build new kinds of energy sources. At the university, administrators and academics used official channels to promote anti-climate change films, host conferences on how to super-charge oil extraction before that market is undercut by renewable energies and besmirch those providing empirical evidence proving how environmental risks overlap with race, class, and gender issues. Finally, through rent-seeking activities, the local ruling class has sequestered billions of dollars in Caribbean tax havens and siphoned money off to Northern banks. Currently, they are migrating to the North leaving the poor to ‘suffer what they must’ without a tax base nor adequate state revenues to fund social programs. When challenged, Trinidad and Tobago’s ruling class (as in other countries), use bad faith arguments to skirt accountability. The false dichotomy between economic and environmental rights is used to quell any second thought about the impact of hydrocarbons on human life. This form of governance is very far from the kind envisioned by West Indian theorists like CLR. James and Frantz Fanon.

As this case relates to Angus’ argument, while he makes strong assertions, feasibly they could be stretched a bit. To my mind it is not abstract moralising to begin asking difficult—and perhaps initially inelegant—questions about whether this local ruling class should be held legally accountable for their climate crimes, and whether their property should be attached, confiscated and returned to the Caribbean to be put in service of public projects trying to limit the harms of global warming. Working through these difficult questions require us to engage with the legacies of racial capitalism, post-colonial governance, the international political economy, and class politics. And while I use my experience in the Caribbean to raise the issue of expropriation, similar issues apply to oil executives and shareholders residing in Canada, the United States et al. These kinds of ethical, legal, and political questions require due exploration, yet Angus seems so confident with a kind of Wissenschaft that simply sets aside matters of social justice and redress as abstract moralising. However, Marxism’s language of alienation implies a moral framework that, albeit historical and adaptive, is compelling. It is one helpful to appeal to when trying to implement a broad-based program predicated upon Angus’ mantra of ‘preserving, repairing, and ending.’ Herein, being a ‘good ancestor’ requires contemplation about our obligations to nature and to one another, and what we do with those who have egregiously transgressed billions of people at the expense of accumulating billions of dollars.