Marx & Philosophy Review of BooksReviews‘Continuity and Rupture: Philosophy in the Maoist Terrain’ reviewed by Hamayon Rastgar 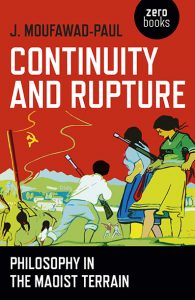 Joshua Moufawad-Paul
Continuity and Rupture: Philosophy in the Maoist Terrain

There is a lack of a meaningful material on Maoist theory within the existing body of Marxist literature. Therefore, knowledge about this theoretical tendency is relatively poor. For example, A Dictionary of Marxist Thought does not contain an entry on Maoism. This lacuna is a glaring reflection of the general ignorance about Maoist theory particularly since, in several countries of the global south in the past two decades, there have been various people’s wars waged under the banner of Maoism. In the epoch when capitalism is triumphantly declaring ‘the end of history’ Maoism has become the ‘greatest internal security threat’ for a state like India, so much so that Financial Times has asserted that ‘the spectre of Maoism’ is ‘haunting south Asia.’ Therefore, J. Moufawad-Paul’s book Continuity and Rupture: Philosophy in the Maoist Terrain is a much-needed corrective.

In this book Moufawad-Paul outlines and engages with the theoretical development of Marxism-Leninism-Maoism [MLM], and provides an understanding of Maoist theory in the way it is understood by contemporary Maoist organizations. In explicating the development of the concept of Maoism, Moufawad-Paul argues that Maoism

Moufawad-Paul claims that MLM is ‘a third stage of revolutionary science’ (3), and a theoretical development of the science that sums up its continuity in the formula Marxism-Leninism-Maoism.

Furthermore, the author argues that this modern understanding of the concept of Maoism, despite the prior existence of the name, only emerged in late 1980s, at least a decade after the defeat of revolution in China and restoration of capitalism, with the Communist Party of Peru launching its people’s war and declaring Maoism the third stage of revolutionary science. The key moment in the formation of MLM as a coherent theoretical concept, according to Moufawad-Paul, is 1993 when the Revolutionary Internationalist Movement [RIM] emphasised Maoism’s universal applicability, stating that ‘without Maoism there can be no Marxism-Leninism. Indeed, to negate Maoism is to negate Marxism-Leninism itself’ (3).

As a philosophical intervention, Continuity and Rupture is primarily concerned with explaining the meaning of contemporary Maoism, or what the author calls ‘Maoism-qua-Maoism’, rather than theorizing what he takes as already established by the historical process described above. In this sense the book has to deal with the following problems: i) the existence of a tendency called ‘Maoism’ prior to the period he treats as foundational and why this tendency was not Maoism proper; ii) the justification for Maoism as a ‘third stage’ of revolutionary theory; iii) how Maoism is distinct from simply Marxism-Leninism. The first of these problems is relatively easy to solve, even if, as the author himself begins by admitting, it might seem ‘counter-intuitive’ to claim that Maoism ‘did not exist’ prior to 1988 (xii). Moufawad-Paul, employing the philosophical distinction between name and concept, demonstrates that the previous name ‘Maoism’ that was used by organizations throughout the world in the 1970s-80s was conceptually an ‘anti-revisionist Marxism-Leninism’ (often going by the term ‘Marxism-Leninism-Mao Zedong Thought’), and did not treat itself as a new ‘stage’ of Marxism. The solution to this problem, however, leads directly to the other philosophical dilemmas; just what makes something a ‘stage’ in ‘revolutionary science’? What is the conceptual difference between Marxism-Leninism and Marxism-Leninism-Maoism? And, moreover, by what token can we use the term ‘revolutionary science’ in the first place? The majority of the book is dedicated to engaging with these questions in a way that opens the door for further examinations of a theoretical tendency that, to date, lacks any rigorous academic investigation.

In this context, Moufawad-Paul argues that Maoism developed through a dialectical process of continuity and rupture; it emerged ‘precisely at the point where Marxism-Leninism had reached its limits.’ Maoism was thus theorized, through a systematization of the event of the Chinese revolution ‘because those behind its theorization were encountering, in the crucible of class struggle, problems that Marxism-Leninism was incapable of solving’ (86). By setting up a schema of theoretical development through world historical revolutions, Moufawad-Paul is able to demonstrate how Maoism, while carrying on the revolutionary tradition of Marxism and then Marxism-Leninism, ruptures from this tradition by rearticulating the ‘theoretical terrain’ of Marxism. Hence, whereas the ‘Maoism’ of the past was simply a Marxism-Leninism that declared fidelity to the Chinese Revolution, ‘Maoism-qua-Maoism’ is a different theoretical entity.

Indeed, Moufawad-Paul maintains that the general limits of Marxism-Leninism required ‘a theoretical rupture’. Following the defeat of revolution in the Soviet Union, the revolutionaries in China theorized that class struggle continues under socialism: representatives of the bourgeoisie within socialist society––not external agents, as Stalinism would have it, but forces internal to socialism––would attempt to overthrow proletarian dictatorship, and replace it with bourgeois dictatorship. This understanding led the Chinese revolutionaries to develop the theory of the continuation of class struggle under socialism, and launch the Great Proletarian Cultural Revolution. While these were the lessons that the anti-revisionist communists employed in their struggles, under the name of ‘Maoism’, in the 1970s they still encountered the limitations of Marxism-Leninism that would make the Maoist theoretical rupture necessary. That is, all of the theoretical insights that were opened by the event of the Chinese revolution’s sequence (cultural revolution, mass line, line struggle, the party of the new type, etc.) were not treated as universal developments of Marxist theory, and as Moufawad-Paul demonstrates, remained under-theorized. Hence, the New Communist Movement based its theory and practice on a fidelity to ‘orthodox’ Marxism-Leninism, maintaining everything said by Lenin, Stalin, and Mao, rather than grasping that a heterodox rupture was in possible emergence.

The need for this heterodox rupture, according to Moufawad-Paul, is explicated in the limits of Marxism-Leninism that the anti-revisionist movement reached in a central contention of the communist movement: the question of organization. That is, the central contradiction of this period was the fact that

In the new Maoist return to the question of organization, where the theory unlocked by the Cultural Revolution is systematized, it becomes possible to move beyond the contradiction of Marxism-Leninism. According to the author, this possibility is

because the party does not simply lead the masses; the party also must be held to account by the masses and in this accounting class struggle continues. Those petty-bourgeois intellectuals who once defined the meaning of revolution, if they were indeed petty-bourgeois intellectuals should be called to account by the very revolution they once claimed to represent’ (129).

According to this theory of mass-line, ‘any revolutionary theory coming from outside must find its limits in the inside of the proletariat: if it is rejected by the most radical factions of this class then it should be rethought’ (132). In applying the theory of the mass-line the Maoist party of the new type upholds the Leninist lesson of the vanguard party, answering an important need of revolutionary strategy, ‘but is not trapped in the structural monolithism, best represented by the Communist Party of Soviet Union under Stalin, where party cadre were disciplined ‘military staff of the proletariat.’ (189)

Furthermore, Moufawad-Paul also provides a critique of other approaches within the broader left that attempt to provide alternative methods of handling the impasse reached by Marxism Leninism, which opens the possibility of critical engagement with this question on the broader left. The impasse of Leninism and the retreat of revolutionary communism has led many anti-capitalist forces towards post-modern and anarchist methods of organizing, where revolutionary parties that still uphold Lenin’s theory of vanguard party are ‘treated as authoritarian and thus suspect’ (190). Moufawad-Paul, following the arguments in his previous book (The Communist Necessity), provides a very pertinent critique of what he calls ‘movementism’, which he claims has ‘failed to deliver anything useful for an anti-capitalist praxis.’ (190) Here he highlights the futile attempts of Hal Draper’s theory of socialism from below ‘to square Leninism with the movementist circle.’ While Moufawad-Paul gives credit to Draper for being ‘insightful enough to recognize the limitations of Leninist orthodoxy,’ (195) he criticizes Draper’s attempts to move beyond the limitations of Leninism by abandoning the concept of the vanguard through movementism as being ‘in the last instance economism.’ (200)

Whatever problems and omissions it might possess, Continuity and Rupture establishes a strong argument that ‘there can be no authentic Marx or Lenin that can be directly apprehended, bypassing Mao’ (222). While, to date, it is only the first philosophical intervention on what the author often calls ‘the theoretical terrain of Maoism’, it is an opening that is notable in how it throws light on the problematic of grasping the revolutionary kernel of the theory of communism. As author argues, if we are to make sense of revolutionary theory then we must also understand the dialectical process of continuity and rupture, in historical instances of world revolution, through which communist theory has developed. In this sense, Moufawad-Paul makes an appealing case for a return to the revolutionary kernel of communism through understanding the most contemporary stage of the development of the ideology and science of revolution, namely Maoism.