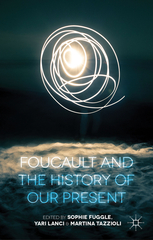 Sophie Fuggle, Yari Lanci and Martina Tazzioli (eds)
Foucault and the History of Our Present

Jordan Liz is pursuing a PhD in Philosophy from the University of Memphis. He works on …

Whether discussing the confinement of the insane in Europe or the establishment of the medical sciences in the beginning of the nineteenth century, the significance of history in the work of Michel Foucault is evident. But why was Foucault so interested in the past? What was the role of history in his philosophical critiques? When asked about this in an interview in 1981, Foucault replies that he was interested in these histories because he “saw in them ways of thinking and behaving that are still with us. I try to show, based upon their historical establishment and formation, those systems which are still ours today and within which we are trapped. It is a question, basically, of presenting a critique of our own time, based upon retrospective analyses” (Simon 1981, 192). Foucault sought to use history methodologically by beginning with a present-day problem or puzzle about the current arrangement of practices and discourse and asking the question, ‘how did we get here?’ How did these particular systems of power, knowledge and subjectivization emerge historically? Why did they emerge now within these specific historical conditions? How do these current configurations resemble former systems? As he emphasizes in his description of Discipline and Punish, the goal is not to write “a history of the past in terms of the present” but rather that of “writing a history of the present” (Foucault 1977, 31).

It is with this critical insight in mind that the essays collected in Foucault and the History of Our Present attempt to utilize Foucault’s methodology to explore the history of our own present, to adopt his critical attitude and approach to analyze the emergence of present-day practices. Importantly, as the volume’s editors write in their Introduction, “to deal with Foucault in the present day does not simply imply testing the validity and the limits of Foucault’s tool-box or using this as a purely explicative lens. On the contrary, it requires taking on Foucault’s attitude and concepts as possible tools for keeping open the space of freedom, refusal and transformation at stake in any present” (5). The intention, then, is not to take Foucault’s conception of, say, governmentality or regimes of truth, and then apply them to current situations; rather, to re-conceptualize his concepts in light of the multiple presents that comprise our contemporary experience and to draw upon Foucault’s methodological insight to analyze our own history.

This volume is separated into four parts. The first part, which is titled ‘Histories of the Present’, includes four essays. In ‘“What Are We at the Present Time?” Foucault and the Question of the Present’ ,Judith Revel focuses on the critical historical attitude that Foucault sees Kant developing in ‘What Is Enlightenment?’ – one that constructs a game of opposition between two economies of thought, such that we are able to understand ourselves today in light of what we are no longer. This method of differentiation opens a philosophically fruitful experimental space that allows us to carry out today the kind of conceptual and practical work Foucault sought. In, ‘What Is Capitalist Power? Reflections on “Truth and Judicial Forms”’, Alberto Toscano, following the work of Stéphane Legrand and Guillaume Sibertin-Blanc, examines the relationship between power and capitalism in Foucault’s work. The goal here is neither to trace the significance of Marx throughout Foucault’s work nor to attempt to forcibly tie their projects together; rather, Toscano seeks to articulate a Foucauldian theory of capitalist power that “would put the political production and reproduction of living labour-power (of bodies and populations) at its centre” (39). Next, beginning with Foucault’s concept of governmentality, in ‘Foucault in India’, Sanjay Seth develops a notion of “colonial governmentality” to examine how a shift towards population and statistics created the category of the “backwards Muslim” in India. In the fourth essay in this part, ‘“Critique Will Be the Art of Voluntary Inservitude”: Foucault, La Boétie and the Problem of Freedom’, Saul Newman argues that, contra the standard reading, freedom, for Foucault, “is the ontological basis of all power” (63). That is, because Foucault envisions systems of power as historically and culturally contingent, they are only able to operate as long as subjects freely submit to them; as such, freedom can be found in our active and willful refusal to acquiesce to those systems.

The second part of the book, which is titled ‘Spaces of Govermentality’, features three essays. In ‘The Other Space of Police Power; or, Foucault and the No-Fly Zone’, Mark Neocleous argues that understanding contemporary “no-fly zones” requires expanding on Foucault’s notion of police power by treating it as inherently and inseparably related with war – two notions that while related represented two distinct institutions for Foucault himself. In ‘On The Road with Michel Foucault: Migration, Deportation and Viapolitics’, William Waters develops the notion of “viapolitics” to analyze the distinct power dynamics of the vehicle as a site of migration in contemporary Western societies. Whereas Foucauldian genealogies of power tend to focus on fixed institutions such as the prison, the schoolhouse or the clinic, Waters uses viapolitics to problematize migration “from the angle of the journey, and the vehicles, authorities, markets, infrastructure and subjectivities that mediate that journey” (101). Then, in ‘Securing the Social: Foucault and Social Networks’, Tiziana Terranova puts forward the novel interpretation that the emergence of social networks is intimately tied with history of biopolitical techniques and the political rationality of liberalism analyzed by Foucault in The Birth of Politics and Security, Territory, Population.

The third part, which is titled ‘Troubling Subjectivities’, features three essays. Alain Brossat begins his essay ‘Human Pastorate and “La Vie Bête”’ by describing his astonishment at the fact that despite arguing that pastoral power aims at the care of the people, Foucault never analyzes the dynamics of this relationship from the perspective of the people. However, after careful textual analysis, Brossat reveals that this omission is not a blunder on Foucault’s part, but rather his attempt to emphasize that from the perspective of pastoral power (of which contemporary biopolitics is one form), the people are rendered insignificant and only the lives and humanity of the pastors are guaranteed. In ‘Beyond Slogans and Snapshots: The Story of the Groupe d’Information sur les Prisons’, Sophie Fuggle argues that contemporary public outrage directed at the increasingly limited educational opportunities in prisons – exemplified by Chris Grayling’s 2013 banning of books in UK prisons – tends to miss the deeper issue. More specifically, Fuggle argues that this outcry is a “bad faith exercise” that overlooks how prisons systematically silence the voices of inmates and their families and the deeper issue of why prisons, in their current configuration, emerged in the early twenty-first century in the first place (156). Next, in ‘Troubling Mobilities: Foucault and the Hold over “Unruly” Movements and Life Time’, Martina Tazziolli, inspired by Foucault’s analysis on labor regimes and disciplinary power, prompts a reconceptualization of borders and the lives of migrants in contemporary Western governments.

The fourth and final part is titled ‘Politics of Truth’ and features five essays. In ‘Enviornmentality and Colonial Biopolitics: Towards a Postcolonial Geneaology of Environmental Subjectivities’, Orazio Irrera develops a genealogy of environmentality to show how Foucauldian analytics may enable us to acquire a deeper understanding of the emergence of common-pool resources and of the political subjectivities that are formed as result. To develop this point, Irrera focuses specifically on the case of forest use in the Uttarkhand State. In ‘Pierre Hadot and Michel Foucault on Spiritual Exercises: Transforming the Self, Transforming the Present’, Laura Cremonesi argues that both Hadot and Foucault attempted to re-conceptualize the ancient practice of spiritual exercise into a means by which we could today modify our way of being against dominant power relations. In ‘A Decolonizing Alethurgy: Foucault after Fanon’, Matthieu Renault shows how Foucault’s discussions on confessions, truth-telling and race war help us further understand Fanon’s notion of the production of truth within a colonial context. In ‘Ethics as Politics: Foucault, Hadot, Cavell, and the Critique of Our Present’, Daniele Lorenzini shows how the work on ethics and politics of Foucault, Hadot and Cavell all provide fundamental tools for conceiving of the practice of philosophy as a permanent critique of our present. Finally, in ‘Resistance and Vulnerability: An Interview with Judith Butler’, Judith Butler discusses her Foucauldian influence as well as what she sees as potential limitations of Foucault’s analysis.

By and large the essays in this volume explore many interesting and important themes and events and show how Foucauldian analytics may be used to understand and interpret the history of our many presents. That said, one might object to the use of Foucault’s concepts and methodology in achieving this goal. While the Introduction posits that Foucault’s work will not be used as a toolbox, wherein one need only find the right concept and then readily apply it to a contemporary situation, it is at least debatable whether the essays in this volume push this idea far enough. That is, while certainly none of the essays directly apply Foucault’s concepts to the present, several of them begin with those concepts and then reinterpret or modify them in such a way that they help explain the present situation. But is a modification enough? Can we really just begin with Foucault’s concepts of, say, governmentality or subjectivity, and then readjust and apply them to our present? Foucault, after all, develops these concepts within very particular historical and cultural milieus; as such, there is no reason to believe either that they are readily applicable to our present or that they are conceptually still linked to the power/truth/subject dynamic currently in operation. That is, there is no reason a priori to hold that governmentality, for example, has any relevance to an understanding to the present power relations. They may have a historical relevance, assuming to what extent one accepts Foucault’s genealogy; however, given that the concepts he develops do not constitute transhistorical facts, whether or not they can be modified to fit the present is, at least, a questionable thesis following Foucault’s methodology. Instead, it seems that one must conduct a genealogy of contemporary practices and then seek to determine whether the analysis reveals the kinds of power structures that Foucault conceptualized in his own work.

Nevertheless, whatever their potential drawbacks, the essays in this volume are a valuable contribution to those looking to use Foucault’s concepts and methodology to understand contemporary situations. Each offers us new ways of understanding, theorizing and resisting the power relations still in operation today.