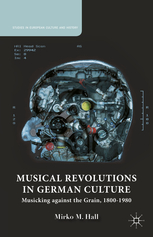 Nearly thirty years ago, Public Enemy released It Takes a Nation of Millions to Hold Us Back (1987), a hip hop album as legendary for its approach to sample-based composition as for its lyrics. Many of the tracks are assembled from dozens (or even hundreds) of chopped-up and manipulated fragments of speech, instruments, and other noises. Mirko Hall’s Musical Revolutions in German Culture, raises the possibility that these backing tracks embody a sharper critique and a more powerful call to revolution than even Chuck D’s politically incendiary lyrics. While Hall does not address hip hop in Musical Revolutions, the analytic tools he crafts in his astute and inventive history of German aesthetic philosophy are easily applicable to a world of other contexts. Thus, even for a reader like myself, whose research interest is not grounded in German intellectual history, Hall’s book is engaging, stimulating and generative.

Musical Revolutions is itself a peculiar mash-up, tracing the revolutionary potential of aesthetic philosophy through case studies of four figures spread across two centuries. Two of these figures, Walter Benjamin and Theodor Adorno, are certainly familiar to readers of the Marx and Philosophy Review of Books. Hall gives his discussion of Benjamin and Adorno a unique inflection however, by bookending it with two less familiar, but no less brilliant, thinkers: Friedrich Schlegel and Blixa Bargeld. Hall ties this unlikely quartet together by locating across their bodies of work, three fundamental and revolutionary assumptions about music: “the hermeneutic inexhaustiblity of sonoric signifiers, the dissonant potentialities of music’s formal apparatus, and the social truth of neglected and marginalized sounds” (4).

For Hall, these assumptions are the foundation of the “oppositional practices that allow for sustained moments of musicking against the grain” (10) discussed throughout Musical Revolutions. Coined by musicologist Christopher Small, “musicking” is a term that encompasses the diversity of aesthetic, critical, and creative practices that take place around musical performances. Most importantly, musicking serves as a common term for describing a wide range of activities (from performing to composing to critiquing to dancing) without privileging one over the others. As a mode of critical inquiry, “musicking” allows Hall to recognize a strong continuity across the four theorists’ diverse theoretical, methodological, and political commitments.

Musical Revolutions proceeds roughly chronologically from Friedrich Schlegel’s philosophical fragments to the sonority of Walter Benjamin’s materialist history to an optimistic engagement with Theodor Adorno’s aesthetic philosophy of radical music and finally to the industrial clangor of Blixa Bargeld’s musical destruction (destruction of music?). Together, these musicking intellectuals assemble “a toolkit of critical-negative strategies” that Hall uses to articulate a revolutionary counter-current that runs through German intellectual history (4). As with any productive historical project, Musical Revolutions not only recounts a story of the past but invites readers to develop their own “critical sonoric consciousness” and to extend Hall’s intervention into new venues (17).

Hall moves expeditiously through his four rich case studies offering a representative, if not comprehensive, sampling of each thinker’s revolutionary approach to aural culture. His ability to capture the complexity of each of these idiosyncratic voices with care and clarity is remarkable. Despite the expanse of this undertaking, Musical Revolutions accomplishes its task in fewer than one hundred-fifty pages. Encapsulating each thinker’s work in a few dozen pages is necessarily reductive and, as such, none of the chapters is suitable as a general survey of the man discussed therein. At the same time, each chapter delivers an incisive argument about its subject’s place within the revolutionary trajectory constructed within Musical Revolutions.

The first chapter locates, in Friedrich Schlegel’s call for a romanticization of music at the turn of the nineteenth century, the roots of the critical tradition addressed throughout the remainder of the book. As Hall summarizes, Schlegel’s philosophy helps us “envision a cultural-revolutionary practice of music that promotes an always critically attuned ear” (27). Only through critical attunement, could subjects hope to resist the “manipulative aesthetics of effectivity on various eighteenth-century institutions” (48). In other words, Schlegel identified both an embryonic form of what the Frankfurt School thinkers would later describe as “the culture industry” and some modes of resistance that these twentieth century Marxist theorists would mimic. For Schlegel, music “can best represent the critical possibilities of semantic inexhaustibility” because its extra-linguistic structure helps make music resistant to “instrumentalized thought” (37-8). That is, “music has a signifying potential that often escapes the forces of cultural codification that plague linguistic communication” (39). Schlegel’s critical attitude, therefore, is revolutionary to the extent that it seeks the infinite perfectibility of confusion, disorganization, and dissonance by synthesizing antithetical elements into a “continual self-creating interchange of opposites” (47). Thus, Hall asserts, Schlegel foresaw that only those musics—and musicking practices—that favor dissonant assemblage over the staid consonances of formal composition could hope to escape commodity fetishism (49).

Rather than offer a broad introduction to Walter Benjamin, the second chapter of Musical Revolutions narrowly targets Benjamin’s writing on the materiality of sound. Hall expertly synthesizes a cohesive theory of dialectical sonority from Benjamin’s somewhat disparate writings about aural culture. Hall defines dialectical sonority as:

an acoustic object that—through the tense, fleeting crystallization of antithetical sonoric elements—provides an analytical critique of acoustic power/knowledge constellations, while resonating with the sounds of revolutionary historical consciousness. It materializes through a tactile thunderclap that is the audible implosion of contradictory acoustic elements or “sound bytes.” (65)

Through defamiliarization and sober criticism, a dialectical sonority can “reveal the hidden utopian potential encoded within the acoustic sub-stratum of history” (66).

For Hall, the revolutionary potential of the aural world is most available in electronic compositions. Evocative of Pierre Schaeffer’s quest for acousmatic objects, Hall argues that “synthesizers and samplers are syntax destroyers; musicians can manipulate—both temporally and spatially— digital ‘samples’ of sound, while simultaneously generating never-before-heard sonoric constellations” (71). Thus, the historical materialist critic ought to be fluent with the tools of sonoric experimentation and able to practice an active mode of “dialectical listening” whereby their ears critically re-hear sounds, searching for revolutionary potential within the soporific harmonic hegemony of the consumer capital soundscape (72-3). Like Public Enemy’s production team (the Bomb Squad) half a century later, Benjamin advocates sonic fragmentation: a practice which “violently removes the sonoric object from its ephemeral and transitory context within history”—the illusion of a harmonious whole (76). From there, one can shuffle and reshuffle the world of auditory detritus to locate a flash of truth that had been ignored in the sound’s previous life as a commodity.

Benjamin saw vernacular culture as a unique repository of historically charged objects that could be exploded from history and wrested from official narratives by critical acousticians in search of some remnant of “objective social truth” (77). Theodor Adorno, by contrast, is often characterized— or perhaps “caricatured”— as being universally dismissive of popular culture. In his chapter on Adorno and “radical music,” however, Hall presents Adorno as a formative interlocutor with punk and industrial music discourses, arguing that Adorno’s fundamental query “How is musical spontaneity socially possible at all?” (82, emphasis in the original) finds its best answer in the work of the Sex Pistols, Sonic Youth, and Einstürzende Neubauten. The regressive tendencies of the relationship that music brokers between subject and society are masked by the culture industry’s illusion of harmonious universality. Only through negative critique can the liberatory potential of such musics be recovered. As Hall writes:

By shattering the illusion of harmonic reconcilliation and by existing in social isolation, Adorno was convinced that music could fundamentally negate capitalism’s false consciousness. [Radical music] reveals a distinct loss of faith in the traditional bourgeois demands for aesthetic unity and integration… Since any affirmative meaning can be immediately co-opted by the culture industry, such music must deny itself social intelligibility. (93-94)

In other words, music’s radical potential lies in its ability to remain unintelligible to the culture industry— to be (dis)regarded as “noise.”

Noise, for Blixa Bargeld, the subject Musical Revolutions’ final case study, is a key musical and theoretical concern. According to Hall, Bargeld understood that “the deconstructive potentiality of noise—in its sheer physicality and radical negativity—could transvaluate a German musical tradition that was torn asunder by the manipulative ideologies of National Socialism and the culture industry” (111). If music is “a politically determined sonoric code that orders power and privilege in society,” then the destructive musician (an adaptation of Benjamin’s historical materialist par excellence: the destructive character), must “explode (i.e., ‘destroy’) the reified narratives of music, recruit their acoustic shards and fragments, and forge them into new dialectical sonorities” (117). The ideal result for Bargeld would be unlistenable and painful: “noise is not only the acoustic signature of dissonance, but also a discursive weapon that annihilates the anesthetizing conditions of consonance, counterpoint, and harmony” (127). That is, by reconfiguring the “predetermined conditions of intelligibility” through noise, Bargeld modeled a revolutionary approach to politics: one which not only toppled authority but, in Jacques Ranciere’s terms, upset the very “distribution of the sensible” that had made such authority plausible in the first place. Noise is the sound of revolution!

Two critical questions frame Musical Revolutions: “How might we continue to rescue the secret critical-negative and cultural-revolutionary potential of musical phenomena in our particularly dark times. And how might we counteract the forces of standardization, pseudo-individualization, and repetition-compulsion that strive to annihilate music’s emancipatory potential?” (138) Hall answers only obliquely. He argues that the purpose of revolutions is not—and cannot be—to construct a blueprint for revolutionary action. Instead, he writes, “my effort to redeem the hidden legacies of past musical experiences is an attempt to provide future readers with additional windows of opportunity” (146). While the solution he poses is not as clear or refined as his articulation of the problem, Hall provides readers with enough critical-musicking instruments to equip themselves as destructive musicians—or better, “destructive musickers”—in their own right. More than a work of historiography or criticism, Musical Revolutions is a compelling and well-crafted provocation for future scholars to “Bring the Noise.”