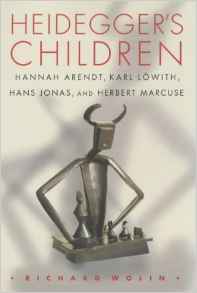 Sheldon Richmond is an Independent Scholar and author of reviews, essays and of the books Aesthetic …

“The best traditions had been cultivated by Jewish emigres in exile. And those who returned had Heine in their luggage”. (Jürgen Habermas)

The disciples or intellectual Jewish children of Adorno may have had Heine, an Enlightenment critic and poet, and a Jewish apostate, in their baggage as they fled Nazi Germany and returned to Germany after the War. However, the intellectual Jewish children of Heidegger were not fans of Enlightenment German thinkers, and those who returned to Germany to query Heidegger about his Nazi turn, might have had Being and Time in their baggage. They had a love-hate relationship with Heidegger, literally in the case of Hannah Arendt, who visited Heidegger some years after the War and again commenced to assist him with promoting his books, even though Heidegger did not admit to any wrongdoing in his wholehearted service to his Teutonic deity, Hitler. At least Herbert Marcuse who also trekked through the Black Forest to chat with Heidegger in his hermitage, severed all relations with him after he refused to seek forgiveness for his eyes wide open adoption of Nazism. “He [Marcuse] implored Heidegger … to express a public word of contrition …Yet Heidegger proved unrepentant.” (166-7)

A thumbnail version of Richard Wolin’s book is that the Jewish intellectuals who were intellectually seduced by Heidegger, committed intellectual patricide on Heidegger after he betrayed their naive trust in him to protect them from the onslaught of Nazi terror. Though they attempted to exorcise Heidegger’s worldview from their intellectual outlook, they all failed and were intellectually dominated by a Heideggerian dybbuk that structured the deepest core of their philosophies.

The subtext of Wolin’s book is less the Greek Oedipal tragedy, more the biblical taboo against illicit relations among the father and his children: the Lot story where the daughters sleep with their father to propagate the seed of the father because they thought that the fire and brimstone that demolished the wickedness of Sodom and Gomorrah, also demolished all civilization and all other humans; the Noah story where Ham the son of Noah looked upon him naked in his drunken sleep after the flood where human civilization in its sinfulness was washed away. These themes of how corruption and wickedness require radical destruction of western civilization in order to make humanity anew and free of the wicked West’s hegemony were themes that Heidegger’s children inherited from him and which they propagated through their own scholarly productions, even though they no longer felt comfortable in their Heideggerian intellectual cradle. Though Heidegger’s children thought they saw him in his terrible nakedness, and saw the emptiness of his prolix verbosity after he hailed Hitler, they unwittingly let loose a flood of his thinking and unwittingly cast a Heideggerian spell over those who admired their work.

A soulful letter from Marcuse in 1947 to Heidegger quoted by Wolin goes to the heart not only of Marcuse’s disappointment with his former teacher, but also of the disappointment of the other former Jewish students of Heidegger. Despite their disappointment with him, some became eminent refugee academics: Karl Löwith, for one, and Emmanuel Levinas (discussed in Wolin’s New Preface) and some also became eminent public intellectuals, such as Arendt, Marcuse, Hans Jonas and Leo Strauss (also discussed in the New Preface). Marcuse’s letter to Heidegger attempts to show his teacher, his grievous treachery to philosophy let alone to his own thinking: “we cannot make the separation between Heidegger the philosopher and Heidegger the man, for it contradicts your own philosophy. A philosopher can be deceived regarding political matters; in which case he will openly acknowledge his error. But he cannot be deceived about a regime that has killed millions of Jews—merely because they were Jews—that made terror into an everyday phenomenon, and that turned everything that pertains to the ideas of spirit, freedom, and truth into its bloody opposite.” (167) Marcuse and the other former disciples of Heidegger the teacher, but not Heidegger the man, saw him as he was in his naked self: a thinker whose apparently sophisticated, apparently complex, apparently deep thought led him to justify to himself the murder of millions. Like the children of Noah, they saw Heidegger as a person intoxicated with his own ego who turned his thought into a totem for the Nazis.

I focus on Marcuse and on Arendt. First Marcuse: like Arendt, Marcuse attempted to confront Heidegger the man and seek some recognition, some glimmer of awareness, from him of his culpability. But unlike Arendt, Marcuse had the wit and spiritual independence to part from Heidegger the man, who similar to the Eichmannn of the famous book by Arendt, refused to acknowledge guilt, refused to admit any regret. Also, unlike the other Jewish disciples of Heidegger, Marcuse had other major intellectual influences. Marcuse adopted two secular anti-religious Jews as intellectual foster fathers, or at least as intellectual foster big brothers: Marx and Freud. All the other Jewish thinkers discussed by Wolin seemed to fixate on Heidegger and fixate on Heidegger’s own fixation with Greek philosophy. However, in the New Preface, Wolin also discusses very briefly the indirect off-spring of Heidegger’s influential effluence. These include Franz Rosenzweig, who was a Hegel scholar as well as a Biblical scholar and ally of Martin Buber, and Emmanuel Levinas, an icon of post-modernism, who was a scholar of the Talmud. Wolin also discusses Leo Strauss’s emulation of the elitist, authoritarian, and anti-democratic elements in Heidegger’s philosophy and his emulation of Heidegger’s reverence of Greek philosophy. However, to be fair, Strauss also revered thinkers whom Heidegger would have seen as an anathema such as Maimonides and other historical Jewish thinkers.

In his early days Marcuse attempted to create a synthesis of Marx and Heidegger, and later moved to a synthesis of Marx and Freud. But, according to Wolin, Marcuse, though he renounced Heidegger the man was unable to renounce Heidegger the philosopher because Heidegger the philosopher infiltrated the fundamentals of Marcuse’s thought. Marcuse’s famous thesis of the one-dimensional nature of current society where all thought and desire becomes instrumental to the functioning of a production-consumption society, where the only possibility of escape from this one-dimensional world is through its radical destruction and replacement by a new world created by a counter-cultural intellectual vanguard, is a Heideggerian thesis. Though Marcuse thought that he had cast off Heidegger’s nihilistic ontology of Being, according to Wolin, the thesis of the one-dimensional nature of modern society with its refashioning of thought into instrumental rationality, and Marcuse’s elitism amounts to a sublimation of Heidegger’s own adaptation of Nietzsche’s trans-valuation of society by a new elite of those above ordinary humanity.

Second Arendt. Unlike Marcuse, Arendt witnessed Nazism and its attempt to erase Jews and Judaism from humanity on trial as represented by Eichmann in a Jewish court in Jerusalem. Nothing could seem further from the philosophy of Heidegger than Arendt’s theory of how Eichmann could uncritically function with total self-unawareness in the Nazi civil service with his blind dedication to the Nazi public project of ridding humanity of its Jews. Arendt’s theory of the banality of evil has become the fulcrum for contemporary non-theological discussion of evil in academic philosophy. Susan Neiman’s (2002) ground-breaking attempt to provide a secular philosophical account of evil, in her re-interpretation of the history of modern philosophy in Evil in Modern Thought: An Alternative History of Philosophy, rides on Arendt’s theory of evil. Despite Arendt’s own personal trauma with Heidegger’s adoption of Nazism and her own eye-witness account of one of the most important trials of institutionalized evil in the history of jurisprudence, Arendt’s account of the banality of evil, according to Wolin, does not escape the ontologization of nihilism produced by Heidegger’s voluminous texts. According to Wolin, Heidegger laments how ordinary people are prisoners of their situation. More damaging to Heidegger, according to Wolin, is his anti-democratic view that only the elite can escape the prison of their situation through the decisive use of force to create a new situation for the people. Evil is unwittingly produced by functionaries merely trying to do their jobs and to advance in their careers, following the categorical commands, not of reason but of their managers, commanders, and chiefs, in specific times and places on specific occasions. The theory of the banality of evil is a logical corollary of Heidegger’s thought that structured Arendt’s outlook on life.

We learn from Wolin’s book to become an aware intellectual consumer. Be aware of buying into appealing but dangerous ideas. Implicitly, however, Wolin’s book also raises a very troubling question. The eminent philosophers that Heidegger’s children became consciously attempted to reject Heidegger’s philosophy but failed. All of Heidegger’s children, even the independently minded Marcuse, unconsciously incorporated his philosophy into their works, and thereby unintentionally propagating his philosophy among their own students and readers. How then can unsuspecting readers of the works of Heidegger’s children not become unconsciously induced into incorporating some of Heidegger’s dangerous ideas into their own thought? This is a question troubling for open-minded readers who want to study alternative ideas, even those they think are wildly wrong and anti-liberal. What if the critical and open-minded reader can be unwittingly seduced to adopt ideas that turn “spirit, freedom and truth” into their “bloody opposite”?