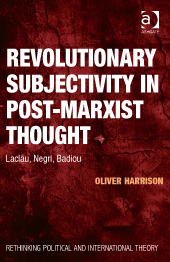 With the crisis and collapse of Marxism as the dominant paradigm of the twentieth century progressive left, post-Marxism (‘postmodern’ or ‘poststructuralist’ Marxism) started to gain ascendancy across fields as diverse as social and political theory, literary studies, and philosophy. Rendered as a more intellectually palatable Marxism (within a postmodern age of radical scepticism), post-Marxism has been a steady undercurrent of Marxist scholarship since the end of the Second World War. It is not without its opponents, however, and it is regarded by some orthodox scholars as a fashionable posture, the ‘advanced stage of an intellectual malady’, and even a ‘short pit stop on the way to anti-Marxism’. (Geras, 1987; Wood, 1998).

Situating the end of Marxist discourse with the collapse of actually existing socialism in 1989, Oliver Harrison begins this study of Revolutionary Subjectivity in Post-Marxist Thought by arguing that Marxism has, for some time now, been ‘ossified into a doctrine that justified state terror’ (1). For Harrison, the emergence of post-Marxism is more readily located in the 1980s, particularly with the publication of Laclau and Mouffe’s Hegemony and Socialist Strategy (1985), a central text in these debates. Limiting the study to three ‘post-Marxist’ scholars (the recently deceased Argentine political philosopher Ernesto Laclau, the communist intellectual and activist Toni Negri, and the French philosopher and critic Alain Badiou) Harrison problematizes their relation to Marx by building in another layer from which these thinkers draw: Laclau has an obvious debt to Gramsci’s conception of hegemony, Negri to Lenin’s writings on party structure and organisational form, and Badiou to Mao and the Chinese Cultural Revolution. Thankfully, and for all our sakes, Harrison avoids the double prefix ‘post’ which has become popular in recent cultural enquiry (are these figures, one may ask, post-Marxist or post-post-Marxist?).

The chapter structure emphasises simplicity and readability. After a series of short chapters on historical and theoretical contexts, each theorist is located within a single detailed chapter. The Introduction is rewardingly brief, with Harrison contending that the questioning of Marx’s most elementary claims has actually provided a rich source of new material, acting as a complement to, rather than a displacement of, Marx’s oeuvre. His focus on the return of Marx’s approach to capitalist crisis post-2008 is not dealt with sufficiently however; he simply acknowledges that in times of crisis ‘the Marxist critique of political economy remains authoritative’ yet without the ‘revolutionary prescriptions’ typically associated with it (1).

Chapter Two gives a short overview of the historical development of Marxist theory across the twentieth century, and is organised around the key thematic headings which have dominated the discourse (orthodoxy, Western Marxism, critical theory, structuralism, post-structuralism, post-Marxism), which Harrison reads as successive stages in the theory’s development. Beginning with an interesting and well-written biography of Marx, Harrison situates Marx’s method and writing as a product of nineteenth century ‘scientific’ enquiry. Strictly speaking, there is nothing new here. Harrison’s focus on the role of Engels deserves some mention, contending that his intervention fostered a more deterministic Marxism than its author had originally intended. Harrison ends this section by arguing post-Marxism must be ‘considered on a case-by-case basis’, but he says little regarding the political consequences of this theoretical fragmentation. In a bid to problematize the so-called ‘ambiguous’ theory of these figures, Marx’s revolutionary subjectivity remains the ‘benchmark’ of Harrison’s enterprise. Yet, while the close focus on selected writings breeds a rewarding proximity with the material, Harrison offers little comment on the larger structural deployments that are the staple of Marxism proper. Perry Anderson’s exemplary Considerations on Western Marxism (1976) is notable for its quick gloss here, with Harrison missing commentary on how the aesthetic came to be the driving preoccupation of Marxist thought from the Frankfurt school onwards.

The chapter on revolutionary subjectivity is the first of the more ‘meaty’ sections on Marx, followed by chapters on Laclau, Negri, and Badiou. Harrison reads Marx’s revolutionary subjectivity as defined by productive activity operating in historically determinate objective and subjective conditions, a ‘prism of human productive activity directed towards the seizure of power’. It emerges via ‘gradual educative experience’ and is neither ‘spontaneous nor inevitable’ (21).

Harrison complements this reading with a launch into the second tier of theorists who constitute the middle base of the study, with a focus on their deviations from orthodoxy. After unpacking Marx’s materialist concept of history, Harrison then focuses on Lenin’s creation of an ‘advanced revolutionary theory’ within the specific limitations of Russian society. Followed by short sections on Gramsci’s re-writing of a Marxist theory of politics through hegemony and, Mao’s application of Marx to a situation without a working class agent, this section is eminently clear and lucid.

Chapter Four offers an excellent overview of Laclau’s political writings, refreshing for its situation of Laclau’s formative political experiences in his native Argentina, which played a major role in his writing on tactical alliances with non-revolutionary sectors. Expectedly, Harrison’s focus remains largely with Hegemony and Socialist Strategy, a work that crystalized the development of post-Marxism. There is little to take to task here; the subject matter is well-handled and broached through smaller subsections focusing on class, discourse, populism, and, of course, subjectivity. The chief task with discussing Laclau however, is the difficulty of registering his thought as interventions in concrete historical circumstances. Harrison does well here, situating the retreat from class within the larger ‘political’ abandonment of social class occurring across Marxist theory.

The Chapter on Negri and the concept of the Multitude follows. Once again, Harrison situates the critic’s thought within the historical and political crisis of its time; in this case the aggressive workers movement in Italy, which for Negri, allowed the rethinking of the Marxist labour/capital binary. In Harrison’s reading of Negri, the form or composition of the working class is different in each particular stage and therefore revolutionary subjectivity cannot be subordinated to an objective position within the relations of production. Negri’s reading of the Grundrisse finds an admirable place here; so often overlooked for his more established work with Michael Hardt. For Harrison, Negri’s reading of Marx through Lenin allowed a more nuanced understanding of the relationship between class composition and organisational form, allowing Negri to ‘reformulate a theory of revolutionary subjectivity in the Italian context’ of his time’ (75).

The final theoretical chapter, on Badiou’s `Communist Hypothesis’, was for this critic the most engaging. Badiou’s continued fidelity to the thought of Mao demonstrates, for Harrison, a structural break with Marx’s thought on revolutionary subjectivity. While Badiou accepts social class as a ‘fully reliable tool’ it remains crucial to ‘move beyond the idea that politics represents objective groups that can be designated as classes’ (Badiou quoted in Harrison, 101). While providing new theoretical resources for these discussions, Harrison remains sensitive to the weakness of Badiou’s account. Divorced from any focus on the ‘economic’, and characterised by a rigid anti-statism, the political effectivity of Badiou’s writing can thus be seriously questioned.

Typically, studies of post-Marxism are guilty of perpetrating the very criticism of orthodoxy they seek to dispel. Harrison’s book is considerably more sensitive to these processes than many others. It concludes with an attempted synthesis of these discrepant positions, arguing to retain Negri’s emphasis on ‘changing forms of productive activity; combine this with Laclau’s formal hegemonic logic […] and finally integrate Badiou’s insights regarding […] the protracted and disciplined nature of revolutionary commitment’. (130). As a ‘complex continuity’ of Marx’s emancipatory project, this is certainly a difficult programme to follow.

The conclusion ends by proposing that a post-Marxist theory of revolutionary subjectivity can be located around ‘fundamental tendencies’, chief of which remains the abandonment of Marx’s theory of history. Revolutionary Subjectivity in Post-Marxist Thought is an excellent addition to the emerging field of critical scholarship on this fascinating area. The subject is well handled and clear, adding an intellectual clarity to a theoretical field that desperately cries out for a clear thematic approach. The clarity and energy Harrison brings to these debates – which, often, are all too quickly given over to academic jargon – is one of the defining achievements of the book. Anyone wishing to become acquainted with these thinkers, and those interested in the complex debt modern critical theory has to Marx, would do well to read this book.