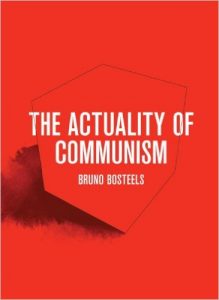 Bruno Bosteels
The Actuality of Communism

Matt Lee is a philosopher, currently helping to organise the Free University of Brighton. He can be …

Bosteels book, first published by Verso in hardback in 2011 and now issued in paperback (2014), arises from the brief, intense period of discussion that surrounded the 2009 conference on the ‘idea of communism’. As is made clear from the very opening pages of the ‘Introduction’, the essays in this book are intended to be part of this discussion, in particular responding to questions posed by Daniel Bensaid about the historical problem of communism, that is, the problem of both the history and the historicity of communism. Bensaid’s question – ‘Of what is communism the name today?’ – only arises because it is widely accepted that the history of communism undermines its potentiality, as though the real problem for communism is that ‘actually existing’ communists have left their dead hand on the heart of the idea. Whilst I would suggest that this problem may arise only because many theorists are too enamoured of the ghosts of a ‘universal history’, at the same time it is clear that both practically and theoretically the problems of the history and historicity of communism are still producing intelligent and interesting debates, to which Bosteels’ book is an important contribution.

The book comprises a series of 5 essays, each originally published within the preceding decade, the final chapter being a revised version of the paper Bosteels gave to the 2009 conference on the ‘idea of communism’. It gathers together a series of interlinked pieces in which Bosteels encounters a variety of ‘deviations’ or problems regarding any attempt to think an idea of communism today. Beginning, in Chapter 1, from a discussion of the recent ‘ontological turn’ in politics, where questions focus on problems arising from conceptual distinctions such as the one made between ‘politics’ and ‘the political’, it is the question of the militant subject that is brought to the fore. If the contemporary metaphysical dynamic is one of ‘deconstructing’ the subject, then, Bosteels asks, what role is there for militant subjectivity within emancipatory politics?

Chapter 2 develops this problem, in particular in a critique of the biopolitical positions of thinkers such as Roberto Esposito, pushing the claim that there is a philosophical appropriation – via the use of the category of ‘the political’ – of politics. Bosteels claims that the Nietzschean position of a ‘grand politics’ that can be found in thinkers such as Esposito falls under the category of Badiou’s ‘archipolitics’. Such a position, “by absorbing the violent break of revolutionary politics into the characterization of the philosophical act proper … allows the philosopher of the overman to portray himself as infinitely more radical than any existing politics” (57). Archipolitics is, it seems, a form of individualisation of the revolutionary moment, converting it from one in which militant subjectivity finds its critical role within historical structures to one in which such subjectivity only arises as a break from historicity.

Bosteels turns from the deviation found in the radical appearance of Nietzschean biopolitics to a prolonged discussion of Rancière that takes up Chapter 3. Here the deviation under discussion is ‘speculative leftism’, which is a more general term for “the philosophical appropriation of radical emancipatory politics” (36) of which the ‘grand politics’ discussed in Chapter 2 is just one form. Bosteels notes Rancière’s important attempts to reinscribe the militant subject in the foreground of politics, motivated in part by a dynamic of resisting philosophical appropriations of politics, arising from Rancière’s responses to Althusser. Yet, Bosteels claims, there is a tension in Rancière’s work between the reinscription of a particular discourse, such as Althusser’s, within history and the historicity of politics qua politics, as ‘the political’. This tension arises from the way Rancière mobilises the given-ness of the political as a break or event resting on the ‘there is’ of ontological distinction. The invariant essence of politics offered by the ‘there is’ moment is, Bosteels argues, a sophisticated version of the “ontologization” of politics, a process which always threatens to idealise its analytical object. Bosteels claims that, for Rancière, “in the final analysis, history’s role seems limited to determining the successive eras of the covering-up of an invariant form of politics” (49).

The moment of the event, one which is mobilised in Rancière to offer grounds for the invariant essence of the political, presents the next step in Bosteels’ reading of contemporary trends and dynamics within the thinking of the idea of communism. Bosteels mobilises Badiou contra Rancière, noting the great tension of the event, of affirming the ‘there is’ of the event, as one of constraint and freedom. Yet here it is not Badiou that is most noticeable, it is, instead, Hegel. In a telling passage Bosteels makes the claim that the only way of avoiding a collapse into speculative leftism is to understand the tension between liberty and constraint as ‘dialectical’ albeit “in a new and untimely sense” (48). Such a dialectical understanding, which would allow liberty and constraint to be understood as mutual presuppositions rather than exclusive options, unfortunately appears to stand as little more than a kind of promissory note for a theoretical solution to problems which often appear as simply ‘badly posed’. There are, no doubt, serious theoretical and practical problems arising from tensions between conditions – theoretical, historical, actual – and conditioned, but such problems seem unlikely to be overcome by promissory notes about a dialectical understanding. They appear more likely to be dealt with, or at least addressed productively by, small scale, case by case work, rather than by grand abstractions about ‘dialectical understandings’.

In Chapter 4 the ‘event’ stays central but this time the focus of the discussion shifts to Žižek. At this point the twin thematics of ‘the event’ and ‘militant subjectivity’ come together as the primary lens through which to think the politics of communism. What Žižek brings to the table, via Lacan, is a thinking of negativity that produces an ‘oscillation’ between, on the one hand, a radical affirmation of the militant revolutionary event that threatens to collapse into a dead repetition and, on the other hand, a stepping back from the weight of history into a philosophical move that attempts to affirm the very possibility of any political event yet threatens to evacuate the political of any material reality. This oscillation, centred on a consideration of the ‘non-act as an act’, such as that found in the inaction of the analyst, enables Žižek to offer a broad account of “all intonations of the act” (213). Having traced a route through the maze of philosophical problematics Bosteels then attempts, in his final chapter, to turn to the question of the ‘actuality of communism’.

Bosteels begins his final chapter by quite clearly articulating his central concern and the one that forms the thread along which the essays hang. “To what extent can we say that communism today is an actuality and not just a spectre; a real movement and not just a ghostly spirit from the dead past, or one whose only forward-looking move is to postulate the need for a speculative-philosophical Idea, whether Kantian or Platonic?” (220-1). In an attempt to answer such a question positively, that is, to point to a ‘real movement’, Bosteels turns to the work of Garcia Linera, vice president of Bolivia. In bringing the work of Garcia Linera to the table Bosteels foregrounds both the historical richness of Marx’s revolutionary thought and the contemporary difficulties embodied in what we might describe, perhaps crudely, as the contradictions between city and land, between industry and labour and between North and South. At a time when the slogan ‘soviet power plus electrification’ is no longer adequate, the central tension for the ‘actuality of communism’ might not be between a past of revolutions gone awry and the future they were supposed to open but instead it may lie in the real problems of a whole world gone awry and the future communism promises to open. One is reminded, albeit in a different tone, of the stark choice posed by Luxemburg, ‘socialism or barbarism’. The actuality of communism must encounter the generalised ecological and colonial crisis that marks the face of the planet with the new ‘war to end all wars’. In ‘traditional’ Marxist terms of debate, it is the national and agrarian questions that must be foregrounded as most real, most capable of actualising any communist theory or act in the coming future. It is in terms of a renewal of these questions that Garcia Linera is brought forward as offering important theoretical resources, ones that go beyond standard post-colonial theory as derived from thinkers such as Said. Of course Garcia Linera is a controversial figure in terms of developing a Marxist understanding of practical relations to the state and unfortunately there is little sustained engagement with possible difficulties that might surround Linera’s governmental activity.

Bosteels’ book has some valuable moments, not least in his last chapter, but it also suffers from its conditions of genesis within a particular debate. It rests on extensive but fairly polemical exegesis, which has the advantage of engaging with the detail of a thinker, but which demands of the reader a considerable degree of already existing engagement in quite specialised theoretical work. It also offers, for the most part, highly intelligent and informed commentary on those with whom it engages but there is little in the way of a detailed development of any particular position or problem and so, at times, one is left with a sense of commentary rather than argument. It relies upon, but does not explicitly offer, a ‘big picture’ of contemporary debate in order to justify its rapid movement from one theoretical position to another and yet, at the same time, its engagement is detailed enough to make it too dense to be an ‘introduction’ to the debate. There is the nagging sense that it would have been better to give more time and space to any of a number of critical comments that were of interest but which were passed over in a couple of pages. Despite these minor criticisms, Bosteels’ work offers some valuable moments of intelligent and engaged thought in terms of theorising the future of communism.