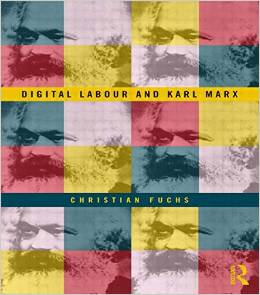 Vladimir Rizov is doing a PhD in Sociology at the University of York, UK. His PhD focuses on the …

Digital Labour and Karl Marx is an intriguing book both for users of digital technology and scholars in the fields of Media/Cultural Studies and Sociology. Fuchs has written a rigorous, passionate, and deeply humane book. It starts with a vivid account by an enslaved miner in the North Kivu region of the Democratic Republic of Congo (1) ofhis painful existence of forced labour in terrible conditions under gunpoint. The reason for this is cassiterite, one of many types of minerals that are used for the production of digital technology. Following this account come quotes from a Chinese worker at Foxconn Shenzhen (manufacturer of Apple products), a Cambodian ICT (information and communications technology) worker in Silicon Valley, a project manager in the Indian software industry, and a software engineer working for Google – all telling either of long hours, precarious work, or exploitation. Fuchs aims to demonstrate the horrible conditions of the international division of digital labour (IDDL) and he does so with fervour. He successfully manages to demonstrate the need to revisit Marx’s work in relation to digital labour. The book provides an in-depth argument for the relevance of Marx by focusing on the concepts of labour and value. It draws heavily on original works by Marx and acknowledges past and ongoing debates concerning the issues at hand. The book is demanding, yet suitable for both dedicated Marxist scholars and readers who are less well read in Marx’s work. Fuchs is thorough in detailing his reading of Marx, which can be welcome for newcomers to the field, while the argument itself and the application of Marx’s work will sustain the attention of those who are better versed in the quoted texts. In short, the book is both informed and informative, as well as being incisive. It problematizes digital labour effectively and convincingly, while drawing on a series of interesting sources and case studies. The book is full of interesting and important points, to which, unfortunately, the size of this review cannot do due justice.

In the first part of the book Fuchs argues for the ‘Theoretical Foundations of Studying Digital Labour’ (21), and explores the concepts of labour and value, cultural studies, audience labour, and information society. The second part of the book analyses digital labour by focusing on six case studies, ranging from enslaved miners through Google software engineers to users of social media. The third part is the ‘Conclusion’ and, besides summarising the work, proposes the Occupy movement as a ‘New Working-Class Movement’ (283).

Fuchs begins the book by invoking awareness of the horrible state of the IDDL; immediately after, he makes an argument for the ‘return of Marx’ (9) both in popular consciousness and academic work. The study of digital labour, he argues, can benefit greatly by an exploration using Marx’s framework, and to do so he starts from the very basics. He revisits Marx’s theory of labour by distinguishing between labour and work, establishing the relevance of value (both use-value and exchange value), the concept of the commodity, and the method of the dialectic. He does so thoroughly, with the exception of the Marxist dialectic and its inspiration in Hegel, which is given only one paragraph (28; considerably expanded, however, in chapter 11, 249, concerning information and communication). However, the dialectic is an aspect that, albeit introduced briefly, is nevertheless effectively operationalised.

In the second chapter Fuchs revisits Cultural Studies. Particularly commendable is Fuchs’s criticism of the radical contextualism often encountered in various shapes in Cultural Studies. Another key point of the second chapter is the changing and inconsistent relationship between Marxism and Cultural Studies. In the process of outlining this, Fuchs identifies the various influences indebted to Marx and he convincingly establishes the need for a Marxist Cultural Studies. Fuchs demonstrates the clear interconnection of economics and culture by telling the poignant story of the closing of the department of philosophy at Middlesex University in 2010 (66-7). The brief mention of the RAE (Research Assessment Exercise) is more than enough to provoke one into consideration of the already proposed relevance of Marx’s work to contemporary understandings of digital labour in neo-liberalism. The RAE and the REF (Research Excellency Framework) are metric tools for quantifying academic labour, a clear example of the convergence of economics and culture (be it philosophy or cultural studies), where intellectual work (or, in Fuchs’s words, information work and communication) is clearly laden with the demands of neo-liberalism.

Following this, Fuchs describes the work of Dallas Smythe and audience labour – the notion that consumption of media is a process of commodification of the audience itself. A particularly interesting aspect is Fuchs’s argument for the complementarity of the Frankfurt School and of Critical/Marxist Political Economy of Media and Communication. He acknowledges the importance and the misunderstandings of the Frankfurt School and Adorno’s work in particular (78). While Adorno is often seen in a one-dimensional manner, Fuchs manages to provide a historical account of Adorno’s work, motivation, and aims. Adorno is mentioned again in the next chapter and is cited in an utilisation of the dialectic in order to refute a series of thinkers such as Castells, Beck, Berardi, Hardt and Negri, Sennett and others on the topic of conceptualising society as continuous or discontinuous. To the question of ‘capitalism or information society’ (150), Fuchs refuses to think of the two as alternatives, and answers ‘society is an information society according to the state of its forces of production. In contrast, however, contemporary society is capitalist in its relations of production’ (150).

While the first part of the book is informative and intriguing, the second part demonstrates the practical relevance of the theoretical foundations. The second part describes the various circumstances of exploitation that are common in the IDDL. He reveals the inhumane conditions of IDDL (for an overview, see table 12.1, 288-92): work under gun point as a slave miner (1, 172); the exploitative work of Foxconn workers that is almost to the letter identical with Marx’s account of nineteenth century Britain child labour (195); the new imperialism at play in the Indian software industry, where precarious work leaves software specialists without time for a private life (207); the mixture of play and labour in workplaces like Google, where employees are quoted to have consistently done 130 hour work weeks, sleeping under their desks due to competiveness and pressing demands for productivity (228); outsourced call centre work that is stressful and affectively demanding, with unfixed hours, all the while under heavy monitoring (238); and lastly, the digital labour of social media users and the exploitation of their cognitive, communicative, and cooperative activity on various online platforms through its commodification (252). Overall, Fuchs provides several accounts of exploitation in the IDDL, each of which alone merits reading the book. In addition, he provides a multi-dimensional account both in his theoretical and empirical writing, continuously, albeit briefly, including critical reflections on gender, race, imperialism, ideology, and unionisation.

In the third part of the book Fuchs uses the Occupy movement as a way of exploring the topic through an activist perspective. He provides a theoretical, dialectical understanding of Occupy’s contradictory use of social media, which is situated in relation to Hardt and Negri, Žižek, Badiou, Dean, Chomsky, Harvey, Laclau and Mouffe, Habermas, Offe and Touraine (314). Additionally, he provides survey data, both his and that of the Occupy Research General Survey (333), which aims to challenge the abstract theorisations of the thinkers listed above. Convincingly, he concludes that an understanding of the Occupy movement must be aware of the complexity of its members’ use of social media. Furthermore, in contrast to thinkers such as Castells (327-8), he claims that social media (and all other media) are not a generator of protest, they ‘can dampen/forestall or amplify/advance protest or have not much effect at all’ (333). Rather than glorifying technology, following Marx, Fuchs argues that one should acknowledge that revolutions ‘require a material basis (the contradictions of the economy, politics, ideology and nature that shape an antagonistic society), but that the idea of revolution can only be realized if the contradictions of reality become subjective insights that motivate practices’ (326).

Fuchs’s analysis is a materialistic and emotive Marxism. He highlights horrific issues, but tends to focus primarily on their material conditions. To the text’s detriment, he does not discuss the ideological elements of such conceptualisations of labour in a way that would provide a critical understanding that could sustain itself beyond the resolution of the material problems. Although he provides an in-depth critique, he does so firmly rooted in an emotive, materialist Marxist perspective. It could not be said that his Marxism is new, nor digital; it is Marxism applied to the issues of the digital.