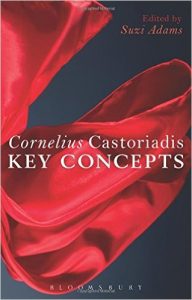 Dr Carol Atack is a lecturer in Classics, with research interests in classical Greek political …

While the work of Greek-French philosopher and activist Cornelius Castoriadis (1922-1997) is the subject of increased scholarly attention, his complex ideas and occasionally idiosyncratic terminology remain opaque to those not already well-versed in them. This volume joins the new wave of scholarship on Castoriadis but, in setting out the novel ideas and terminology of Castoriadis’ work, it aims to provide an accessible introduction by elucidating its ‘key concepts’. As editor Suzi Adams notes in her (far too) brief introduction, ‘Castoriadis’s terminology can be idiosyncratic and challenging to understand’, with much existing scholarly literature ‘aimed at an audience already at least broadly familiar with his project’ (xi). Perhaps now, with the growth of interest in autonomous activist movements and revitalised praxis of new left groups in Greece, Spain and elsewhere, Castoriadis’ radical rethinking of Marxist theory and practice, and thought on autonomy and creation, has a new relevance.

Castoriadis ranged eclectically over many philosophical and political ideas during the course of a long and varied career, first breaking from Trotskyism to found the radical group Socialisme ou Barbarie, developing a critique of both the bureaucratic practices of communist regimes of the 1950s and of the materialist and determinist thought of more orthodox Marxists. He developed his own theories on the creation of society through the generation of ‘social imaginary significations’ by autonomous citizens, drawing on new thought on the psychology of individuals, and developing an ontology to describe his ideas of social creation; his later work increasingly explores his ideal exemplar of an autonomous self-governing society, the Greek polis as represented by 5th century BCE Athens.

Enthusiasts find Castoriadis interesting for several reasons: firstly, his critique of what might be termed a standard Marxist model of historical materialism and academic determinism; secondly, his construction of an alternative model for the generation of society; and thirdly, the position of his work among the many currents of French political and intellectual culture crystallised in the events of May 1968. This volume is strongest on the second of these, providing a handbook to help readers through Castoriadis’ sole monograph, the Imaginary Institution of Society (French original publication 1975, with English translation 1987; ISS hereafter), which represents the turning point in which he drew together his critique of orthodox Marxism (particularly its historical and material determinism) and presented his alternative model and ontology of the institution of society through its creation ex nihilo, coalescence and continuous reinvention, in the shared imaginary of its citizens. 12 of the 19 concepts given their own chapter here are from that work; the number of short chapters gives the volume a fragmented feel (appropriate, perhaps, bearing in mind Castoriadis’ interest in chaos and fragmentation), although the arrangement of chapters and multiple contributions by some authors helps to create some unity.

Adams’ own opening chapter (‘Autonomy’) serves a dual purpose, introducing both Castoriadis himself, with a developmental account of his work, and autonomy, the concept most ‘central to [his] intellectual and political work’ (1). She notes that Castoriadis developed his concept of autonomy from Socialisme ou Barbarie’s interest in worker self-management, presenting the idea of (collective) self-government as an alternative to the imposed rule of bureaucratic capitalism (a form of autonomy’s opposite, heteronomy, ‘law from another’). Of course, the term ‘autonomy’ has its own history, starting with its Greek origins, and one can forgive Adams for not overly complicating this introductory account with a consideration of its broader philosophical heritage. Karl E. Smith’s subsequent summary of its partner and conceptual opposite, heteronomy, runs succinctly through the whole of the process envisaged by Castoriadis – the institution of society by individuals – and also emphasises the heteronomy of modern technological societies. Johann Arnason further explores Castoriadis’ use of autonomy, and his engagement with German idealism, in his coherent and well-organised chapters on ‘Social Imaginary Significations’ and ‘Institution’. These four chapters taken together fulfil the introductory role envisaged for the volume, in terms of making IIS accessible.

The breadth of Castoriadis’ intellectual project and the diversity of thinkers and disciplines with whom he engaged over his career make a chronological overview and sign-posting necessary, at least for newcomers, and this book could arguably have provided more. Explaining Castoriadis’ wide-ranging intellectual references, from Plato through Kant to Lacan and beyond, encompassing disciplines from philosophy to psychoanalysis, means that much subsidiary explication of other authors’ concepts is needed. Adams eschews much in the way of historical contextualisation or biographical information, beyond the introduction and her first chapter. Compared with other volumes in the Key Concepts series (notably that on Jacques Rancière), there is minimal contextualisation of Castoriadis’ work, although there are some notable exceptions. Mats Rosengren’s description of ‘Magma’ (Castoriadis’ ontological and social concept which describes the simultaneous fluidity and stratification of societies (65-74)), and comparison with other attempts to conceptualise intellectual conflict and change (such as Kuhn’s paradigm and Foucault’s discourse), is a good example, although the case for magma as a general concept may be over-stated.

The three short chapters by Jeff Klooger, on concepts from the second part of IIS, exemplify the difficulties of this volume’s project. In this work Castoriadis set out his model and ontology most fully, but it also contains his most difficult writing and concepts such as ‘Ensemblistic-identitary logic’, ‘Legein and Teukhein’, ‘Anlehnung (leaning on)’. The first of these is the name with which Castoriadis identified the creative institution of collectives, the identity of ensembles (like Alain Badiou, he was fond of set theory as ontology); the second is related to the contrast between word and deed more familiar to classical scholars as the opposition between logos and ergon, but envisaged by Castoriadis as a kind of perpetual Heraclitean flux between two drives; the last of these (borrowed from Freud) describes ‘a type of relation in which creation replaces deterministic causality’ (127). Klooger’s descriptions and explanations are helpful, but this complicated part of Castoriadis’ work might benefit from more context and analysis of its affinities with other thinkers engaged in French political philosophy’s ontological turn.

Some aspects of Castoriadis’ thought here are less well-served. A philosophy that posits the creation of society in the imagination of individuals has to have an effective account of that imagination. Castoriadis was committed to gaining a better understanding of individuals’ thought processes; he retrained as a psychoanalyst in the period when he was writing IIS. The depth of this interest is somewhat under-served in this volume, perhaps because it does not fit the ‘key concepts’ framework as well as the ontological thought does; Lacan is largely absent (no index entry, just a passing mention by Adams). Karl E. Smith’s chapter on ‘Psyche’ looks backward to Freud, and does not comment on Castoriadis’ critical engagement with the work of Jacques Lacan, nor with the scholarship that positions Castoriadis on what has been called ‘the Lacanian left’.

IIS emerged in response to Castoriadis’ intellectual and political dissatisfaction with Marxist thought and practice, particularly the problems technocracy and bureaucracy pose for worker regimes. If there is a primary narrative arc to Castoriadis’ project, it is this rejection of Marxist analyses of bureaucracy and determinism, and the construction of an alternative model in which collective autonomy is achieved through the continuous institution of society in ‘social-imaginary significations’. This early stage of Castoriadis’ thought receives brief attention here, in two chapters on ‘Capitalism’ and ‘Socialism’. Jeremy Smith’s ‘Capitalism’ sets out Castoriadis’ engagement with Marxist economic analysis and rejection of the Marxist theory of labour value (155-60); a reminder that, during his early years in France, Castoriadis was an OECD economist. Anders Ramsay’s chapter on ‘Socialism’ explores Castoriadis’ broader engagement with and critique of Marxist thought in his Socialisme ou Barbarie years, and his association (and break with) political theorist Claude Lefort. Readers whose interest in Castoriadis begins with his rejection of classical Marxism would be well advised to start with these chapters, the only ones to explore the early essays now gathered in his three volumes of Political and Social Writings, and whose first English (pseudonymous) publication was in left-wing publications such as International Socialism and Solidarity.

To return to IIS: its conceptual web (or magma) did not mark the end of the development of Castoriadis’ thought. The turn to antiquity evident in IIS developed further as Castoriadis developed his thought on the Greek polis, and particularly democratic Athens in the fifth century BCE, as a site of autonomous institution, and led university seminars on Plato and other Greek authors; the final chapters of this volume, on ‘Democracy’ and ‘Tragedy’, explore these later ideas.

Castoriadis looked to classical Athens as an exemplar of an autonomous society; the Greek polis of self-governing citizens was one of the rare periods of human history in which autonomy rather than heteronomy prevailed. Castoriadis’ Greek polis is a somewhat mythicised entity, drawing on Hannah Arendt (albeit critically) as well as classical sources, and also owing a great deal to the historian Moses Finley’s account of ancient democracy. However, modernity was also important for Castoriadis as a potential site of autonomy and heteronomy, Karl Smith’s chapter on ‘Modernity’ explains how Castoriadis’ model of continuous social-historical creation argued against the possibility of any Hegelian end of history. Political ecology was another strand of Castoriadis’ thought on the modern world, never quite the central focus of his work but featured in collaborative projects and encounters; Suzi Adams’ own chapter on ‘The Living Being’ explores Castoriadis’ how intriguing work in this area expands his ontological thought.

A few editing errors detract from the overall quality of this volume. Greek terminology and author names are not always rendered consistently or correctly (for example, p.99 cites the ‘Hyppocratic [sic] concept of kairos’; p.63: it is Sophocles’ Antigone that Castoriadis discusses in his 2001 paper on tragedy, not a play by Aeschylus: as Castoriadis opposes the thought of the two tragedians in his paper, this is an unhelpful confusion). Tighter editing would have reduced some repeated definitions and translations of terminology, although the ‘key concepts’ structure makes a degree of repetition necessary.

Overall, this volume provides a helpful and detailed introduction to the main concepts developed by Castoriadis in Imaginary Institution of Society, and a more limited but still useful survey of his work before and after that book. It is perhaps stronger on the philosophy than on the Marxism, but that may also be a reflection of the great intellectual distances traversed in the work of this intriguing polymath.