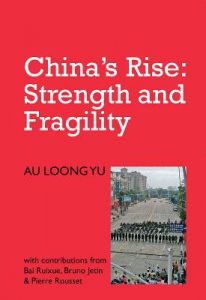 Ryan Mitchell is a Mellon Foundation Humanities Fellow and PhD in Law candidate at Yale University, …

About two-thirds of the way through China’s Rise, veteran labor rights activist and socialist commentator Au Loong-Yu offers perhaps the most concise encapsulation of his book’s central message: ‘In the end, the realization of equal rights for all citizens [in China] will not be achieved without a political upsurge from below.’ (196) The key question left unanswered, however, is what forms of praxis could or should characterize such an egalitarian ‘upsurge’ in the conditions of 21st century China.

The book compiles writings by the Hong Kong-based Au, along with a few selections from China Labor Net editor Bai Ruixue, University of Paris economics professor Bruno Jetin, and international solidarity campaigner Pierre Rousset, all of whom offer critical analyses of Chinese political economy and social justice issues from a Marxian perspective. China’s Rise thus stands usefully at the intersection of two worlds of discourse that (still) too seldom interact: the theoretically-informed critique of 21st century global capitalism and the attempt to interpret China’s role as the most dynamic and ‘successful’ element within that system.

For Au and the other contributors to this volume, the main (and most effectively handled) task is precisely to deconstruct the notion of China’s ‘success.’ Their efforts are broadly divided into three sections: ‘Analysis’ of the country’s post-Reform development, arguing that this has resulted in large part from a combination of luck, opportunism, and exploitation rather than vision on the part of Communist Party leaders; ‘Resistance,’ documenting in more detail the plight of an increasingly marginalized quasi-urban working class that has been rendered, per the title of one essay, ‘disposable labour under social apartheid’ – while seeking to identify ‘new signs of hope’ in scattered attempts at organization; and, lastly, a wide-ranging (and at times somewhat disconnected) ‘Discussion’ of the facts and issues already presented in light of some of China’s most prominent ongoing political debates.

The first two sections, ‘Analysis’ and ‘Resistance,’ are particularly useful for providing empirically-grounded alternative narratives of China’s rise to economic superpower status with an emphasis on its unstable course and human costs. Early chapters point to international and macroeconomic sources of instability affecting the Reform-era growth model, and suggest that inefficiency, bureaucratic corruption, and diminishing comparative advantages all threaten to curtail further growth in the long term. Subsequently, the book’s focus turns towards the existing social impact of mass privatization and no-holds-barred development. As readers might expect, these sections are at their strongest when discussing the plight of China’s urban labor force – both the masses of employees laid-off from dissolved or restructured state-owned enterprises (SOEs), and the even greater numbers of migrant workers who have fled the impoverished countryside for precarious positions in urban centers that afford them no residency rights or social benefits. This massive flow has slowed in recent years along with the growth rate, with a shrinking labor force now contributing to modest beginnings of a corresponding rise of both wages and labor rights awareness. (Wiladu 2015)

At the same time, this vast internally displaced population of precarious laborers, rather than forming a mobilized national class with a unitary set of interests, is better understood as continuing to form part of the global labor reserve underlying neoliberal economics in general. (Bellamy, McChesney and Jonna 2011) The intellectual historian Wang Hui, with whom Au debates vigorously in a late chapter, is correct in his view that ‘today, it is impossible to define socialism or capitalism in their original senses on the basis of the autonomous unit of the nation-state.’ (Wang 2003) Prescriptions for the remedying of unequal labor relationships must, accordingly, take into account both the ecosystem of international capital flows and such overdetermined transnational phenomena as global urbanization. Slavoj Žižek has persuasively identified the global form of the slum as setting for ‘new forms of social awareness’ and potential ‘seeds of the future’ – if these are to emerge at all (Žižek 2006). In this observation, he has the tacit agreement of China’s authorities. Like the global population, China’s remains roughly evenly split between cities and the countryside, and the management of continued urbanization has been correctly identified by the Xi Jinping-Li Keqiang administration as a core axis of its economic and social planning to soften disparities and prevent unrest. (Zhang 2014)

Indeed, many of the problems explored in China’s Rise are currently quite prominent in the official discourse surrounding President Xi Jinping’s ongoing ‘Four Comprehensives’ governance platform. Under the auspices of ‘comprehensively deepening reform’ and ‘comprehensively developing a moderately prosperous society,’ Xi’s government has embarked on an initial course of economic and social reforms. These have so far included, e.g., reduction of the size and influence of key SOEs, the loosening of the One Child Policy, commitments to gradual reform of the household registration (huji or hukou) system, creation of investment-friendly ‘Free Trade Zones’ (‘zimaoqu’), notably in Shanghai, and an evolving program to manage the overall transition to a consumption-based model of economic growth and avoid the looming middle income trap.

At the same time, Xi has waged an unprecedentedly far-reaching and popular anti-corruption campaign, revised the structure of intra-Party governance, launched some meaningful judicial reforms, and tightened defenses against the threat of Western liberal political ideas. Together, many of these latter initiatives fall under the other two ‘Comprehensives’: ‘comprehensively governing the nation according to law’ and ‘comprehensively strictly governing the Party’ (quanmian de congyan zhidang). The last item, in particular, represents an ideological turning point of potentially epochal significance: Xi’s administration has proved itself far from another mere placeholder for various bureaucratic interest groups. To the contrary, he is engaged in a politically ‘experimental’ activist program of internal reform and restructuring to purge and reinvigorate the Leninist leadership model of the Communist party-state, and to ‘discipline [the Party’s] 90 million people.’ (Garton Ash 2015; Keliner and Wu 2015).

These recent developments underscore some of the volume’s analytical gaps. Compiled in mid-2012, China’s Rise necessarily could not incorporate the economic or political changes under the current administration. As noted, these have been dramatic. Yet they have also emerged from a direction that is entirely discounted by the analyses presented in this book: the re-emergence in the Party of a charismatic leading figure around whom has coalesced an apparent consensus for radical reform and mass mobilization (at the expense of factional rivals). By contrast, Au refers to the absence in today’s Communist Party of any major figure pursuing Mao’s style of direct popular engagement (46-7), and much of the volume’s analysis is premised on the prior trend of committee leadership that has been broken with in the Xi era.

The conceptual framework of Chinese ‘bureaucratic capitalism’ that underlies Au’s analyses does allows him to describe accurately many of the ways in which the Reform-era government has ‘serv[ed] the narrow interest of the propertied class.’ (266). The social ramifications of these policies are also deftly examined. Yet the events of recent years call into question the predictive and prescriptive value of this theoretical approach as it is deployed in China’s Rise. Most importantly, Au disagrees with scholars Giovanni Arrighi and Huang Debei when they identify Chinese political authority as ‘autonomous’ from social interest groups or any individual class. On this basis, he denies the latter’s claim that the state is capable of ‘turn[ing] either to the right or to the left.’ (266). Yet we have now seen precisely a turn to the left at least in terms of intra-Party discourse and discipline, amid stronger displays of autonomous state power.

The Chinese Communist Party’s continuing capacity to surprise observers both domestic and foreign should, in fact, itself be taken as a sign of precisely the ‘autonomy’ that Au argues against. The importance of this point is perhaps most apparent in the chapter where he engages with Wang Hui. Taking the latter to task for ‘supporting the party-state’s continuous monopoly of power as a means to fight off capitalism,’ and ignoring ‘the element of class struggle,’ Au argues that Wang ‘writ[es] off the working class and socialism altogether,’ by continuing to view the Party as exercising political autonomy and the capacity for self-transformation. (268-9). Yet Wang’s emphasis on the significance of ‘reform and self-critique’ in existing political organizations appears more pertinent to interpreting China’s current changes than Au’s advocacy of a general popular ‘upsurge.’ (268, citing Wang 2003).

Ultimately, political prediction and prescription may be best facilitated by seeking to understand the dialectical relationship between these two perspectives. As Gramsci notes in The Modern Prince, a political party that achieves genuine and lasting legitimacy ‘can only be an organism; a complex element of society in which the cementing of a collective will, recognized and partially asserted in action, has already begun.’ (Gramsci 1957) Such an ‘organism’ lives only as long and inasmuch as it responds to social stimuli in such a manner as to embed and incorporate all incipient grassroots ‘upsurge’ into its own praxis of ‘self-critique.’ This would appear to be exactly what some figures in the current Chinese administration are attempting to enact via anti-corruption and disciplinary measures aimed precisely at the bureaucratic capitalist class that Au targets in China’s Rise.

In order to understand China’s political possibilities, then, it is important not to simply turn away with distaste from the powers that be. Rather, the Communist Party organization and its social role are unavoidable, core topics of inquiry. Those who share Au’s egalitarian normative agenda should also keep in mind what sinologist Elizabeth Perry has referred to as the millennia-long ‘close relationship between state authorization and social movements in China,’ where even protests by the downtrodden are often conducted in dialogic engagement with the bureaucratic center. (Perry 2002) Far from implying an acceptance of the status quo, an attempt to more fully account for the superstructural position of the Party mandarinate is fully compatible with the premise that one need not thus ‘draw the conclusion that the events of the superstructure must be abandoned to themselves.’ (Gramsci 1957) China’s Rise should be read for its insights into China’s still-unfolding incorporation into global capitalism, with the aim of further exploring the possibilities and contradictions inherent in this paradigmatic encounter.