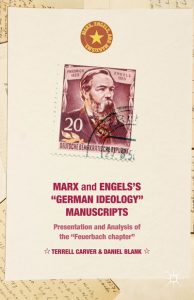 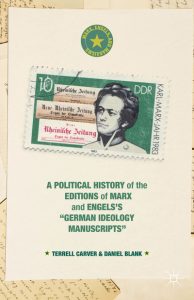 Chris Arthur taught for many years at the University of Sussex. He is the author of Dialectics of …

In 1985 it became possible for the first time in the United Kingdom to sit an A-level examination in philosophy, based on classic texts. Marx was one of the philosophers chosen: but where exactly did Marx put forward his philosophical views? The text chosen for study, as the appropriate source, was the first chapter of the book known to us as The German Ideology by Marx and Engels. This fact provides striking confirmation of the starting point of the volumes here reviewed: how did it come about that an untitled set of incoherent fragments, written in the 1840s and abandoned by their authors, achieve canonical status as the best place to find their new world outlook?

The English version set for study by the Examination Boards concerned was my own ‘student edition’ of 1970, which is still selling well 45 years later, despite its deficiencies (Arthur 1970, of which more below). The exam boards did not specify any commentaries. This deficiency was made good by the Royal Institute of Philosophy for which I gave the lecture on the Marx and Engels text. (Arthur 1986, 147)

The books by Carver and Blank here reviewed are companion volumes. However, each is freestanding and worthy of study in its own right without the other.

I turn first to the one giving a translation and textual analysis of the so-called ‘I. Feuerbach’ chapter: Marx and Engels’s “German Ideology” Manuscripts: Presentation and Analysis of the “Feuerbach Chapter”. The copy-text used for the translation is the German of 2004, edited by I. Taubert and H. Pegler, which is a ‘pre-publication’ of matter intended for the Marx-Engels Gesamtausgabe, Volume I/5.

I begin with a warning. Given the title, those looking for an edition of ‘I. Feuerbach’, usable for study, will be disappointed, because its opening sections (equivalent to Marx-Engels Collected Works volume 5, 27-37 inclusive) are missing. Moreover the reader is nowhere warned of this, still less is the omission justified. What is translated here is a new version (in fact two versions – see below) of what is usually termed the ‘main manuscript’, paginated by Marx from 1 to 72 (almost equivalent to Marx-Engels Collected Works volume 5, 38-92). The reason the authors restrict themselves to this manuscript (in fact it is a collection of fragments excised from earlier manuscripts, numbered by Marx purely for convenience it seems) is that its ‘rough’ state means we can see it as work in progress, with all its deletions, corrections, and marginalia. By contrast the manuscripts (written months later) that comprise the putative beginning of the ‘chapter’ are fair copy. This means Carver and Blank see what can be unpacked from the ‘rough’, about the developing thinking of the authors. They say that in giving us the main manuscript as close as possible to the surviving pages (the handwriting marked as by Engels or Marx) they are not aiming at ‘a new edition’. What they do, rather, is to preface the text with a reflective discussion of various key passages, in order to illustrate what can be gained from the original writings. Carver and Blank are right to say that Marx and Engels were not so certain as they go along with respect to what exactly they need to say to set the ‘critical critics’ to rights. In this sense Marx and Engels’ own verdict that the manuscripts constitute an exercise in ‘self clarification’ is correct.

I did not find anything of great moment in the commentary. But the presentation of the text itself is fascinating; to the left is given a rendering of the raw material and to the right a smooth text ‘of the last hand’ for each author. As for their interpretation of the manuscripts, Carver and Blank show their hand by arguing that Marx had now broken with the term ‘alienation’. Thus those readings of the ‘early Marx’ that ‘rephilosophized’ him are in trouble because here we find him resolutely taking ‘the opposite anti-philosophical tack’. (27)

I turn now to the companion volume: A Political History of the Editions of Marx and Engels’s “German Ideology” Manuscripts. This is characterised by extraordinarily thorough scholarship, and tells a very interesting story. Some twenty editions are treated, together with their editorial matter, introductions, and so forth. The main finding is that there never was a book called ‘The German Ideology’ and that the manuscript ‘I. Feuerbach’ is way short of being its first chapter. What has come down to us is a literary collage, which has been constructed by various editors in various ways. Not only do the authors trace the variant versions but also what they call the ‘political history’ informing the editorial decisions concerned.

This is all great interest but it is far too detailed to be summarised in a review. However, Carver and Blank discover two main lines of editorial intervention: those concerned to produce a ‘study edition’ for a broad readership (justified explicitly by large claims about the substance of the supposed book and especially of its first chapter), and those aiming to produce an allegedly ‘historical-critical edition’ for the purpose of scholarship. (The distinction is explained on 174-5.) In both cases, however, there was a misplaced concern to produce a smooth text ‘of last hand’. ‘Popular’ editions characterised the earlier publications, although readers were blandly assured that the authors’ ‘intentions’ were followed. However, Carver and Blank argue that even the latest ‘critical’ edition has failed to adhere to the highest standards in that it fails to reproduce the manuscripts in the order in which they were actually written; they provide a plan of a ‘contextualised edition’ of the manuscripts which adheres to the chronological order.

It is worth underlining that the Feuerbach critique was never intended to be a ‘first chapter’ when Marx and Engels wrote the critiques of Bauer, Stirner, and the true socialists. It was only after these critiques were completed and sent for printing, that the necessity to take on Feuerbach, also, occurred to Marx and Engels. But the so-called chapter ‘I. Feuerbach’ was in fact never written, and, therefore, does not exist; what we have is only a collection of incoherent fragments written at different times. (81) The title of the published so-called chapter was culled from a pencilled note by Engels at the end of the main manuscript, probably written after Marx’s death. (122)

The most striking finding of modern scholarship reported here is the discovery by Galina Golowina (reported in 1980) that the various sections of ‘The German Ideology’ were not originally intended to be ‘chapters’ of such a book, but were independent journal articles. (94-7) According to Golowina, in 1845 Marx was planning a quarterly journal, over 20 sheets in size, for which he thought he had obtained backers, and for which he commissioned articles, including from he himself together with Engels, of course. This would certainly explain the fact that all the German Ideology sections take the form of critical review articles. Only after the quarterly project fell through did Marx and Engels decide to publish their own manuscripts separately. But they quickly lost interest in this in favour of other projects, such as Marx’s book against Proudhon. If this is true, it seems they never intended to write a book called The German Ideology, when they set about their various critiques.

I turn now to Carver and Blank’s criticism of my own 1970 edition of The German Ideology (mentioned above). They correctly situate its Introduction as in tune with the 1960s interest in ‘praxis philosophy’. As for the text, it was explicitly advertised as a ‘student edition’, and I attempted what they call a ‘logical’ rearrangement of the anti- Feuerbach chapter, a project which they oppose in principle. They criticise me for ignoring the 1966 G. Bagaturiya edition. Unfortunately, I was unaware of this until it appeared in English in 1969, in a new edition of the Marx–Engels Selected Works, by which time my work had already gone to press.

Regardless of its inadequacies I defend the principle of my own edition. Carver and Blank constantly assert (e.g. 4, 6) that they see no necessary contradiction between a historical-critical edition of the 1845-6 manuscripts and a book for a broad audience. I find this baffling. The substance of the projected ‘book’, The German Ideology, would have been hard-going even for contemporary readers well versed in the views of Stirner and company. Today, large parts of it are virtually unintelligible to those outside the academy. The most useful part of it is of course the Feuerbach chapter, but that itself is incoherent, and the order of the manuscripts does not follow any intrinsic logic. Thus there is a very strong case for a study edition of the ‘I. Feuerbach’ chapter. Moreover, since it is certain Marx and Engels would have radically re-ordered and rewritten it, there is nothing wrong in principle about an edition attempting to bring order to these fragmentary musings left ‘to the mice’ by their authors. (But I have come to doubt if any real improvement in readability can be achieved by such an exercise.)

However, the most striking issue that arises is that of why such unpromising, unpublished, jottings should be thought worthy of attention in the first place. Yet I felt impelled to put this material in the hands of my own students, and, as noted above, the A-level boards agreed with me about its value.

The answer to this is that there is nothing like it anywhere else. Despite the fact that Marx’s thought is here still in the process of development, page after page contain astonishing insights. Some statements have achieved almost scriptural status, for example ‘the ideas of the ruling class are the ruling ideas of the epoch’. Of course, care has to be taken not to read into it phrases (e.g. ‘materialist conception of history’) that are simply not there, but as a resource for studying ‘the germ of a new world outlook’ (as it has been dubbed) it stands alone.

More generally, students quickly become aware that Marx never published a book on ‘historical materialism’; nor one on ‘dialectic’; nor even one on the ‘method’ of the critique of political economy. What he did publish were substantive studies. An argument could be made that knowledge of Marx’s ‘philosophy’ and ‘method’ should always be elucidated in its specific embodiment in such works as Capital. But that would take us too far from our task here.

Carver and Blank’s key claim for their ‘political history’ is that the ‘long and complex history of editions of The German Ideology, variously founded on quite different principles, has gone unnoticed and therefore not studied until this volume’. (2) This is true, and the authors are to be congratulated on their achievement.