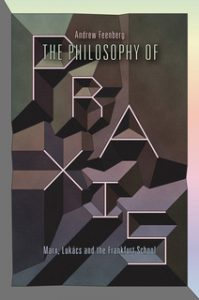 Andrew Feenberg
The Philosophy of Praxis: Marx, Lukács and the Frankfurt School

Chris Cutrone teaches Art History, Theory and Criticism and Visual and Critical Studies at the …

The mastery of nature (so the imperialists teach) is the purpose of all technology. But who would trust a cane wielder who proclaimed the mastery of children by adults to be the purpose of education? Is not education, above all, the indispensable ordering of the relationship between generations and therefore mastery (if we are to use this term) of that relationship and not of children? And likewise technology is the mastery not of nature but of the relation between nature and man. (Walter Benjamin, “To the planetarium,” One-way Street, 1928)

Andrew Feenberg’s new book The Philosophy of Praxis is a substantial revision of a much earlier work, Lukács, Marx and the Sources of Critical Theory (1981). If one were to sum up Feenberg’s main point it would be to recover Marxist Critical Theory’s ability to recognize technology as a social relation, and thus to grasp the crisis of capitalism expressed through the crisis of technology. Feenberg arrives at this recognition of Marxism through an investigation of critical theory as the self-reflection of social and political practice, “praxis,” with its roots in the origins of social theory in Rousseau and the German Idealism of Kant and Hegel that had followed upon Rousseau’s breakthrough. The sources of Critical Theory are thus critical theory’s origins in the critique of society. Society, indeed, is a modern invention, in that only modern society recognizes social relations as such, as part of the emancipation of those social relations. The new, modern concept of freedom beginning with Rousseau – Hegel had written that “the principle of freedom dawned on the world in Rousseau, and gave infinite strength to man, who thus apprehended himself as infinite” (The Philosophy of Right) – originated in the revolution of bourgeois society: a new consciousness of social relations came with the experience of their radical transformation. As Adorno, one of the subjects of Feenberg’s book, put it pithily, “Society is a concept of the Third Estate” (“Society,” 1966).

Technology as a social phenomenon, specifically as a phenomenon of social relations, or, technology as a social relation, is Feenberg’s way into political questions of capitalism. His new title for the revised book takes its name from Gramsci’s term for and description of Marxism (in The Prison Notebooks), the “philosophy of praxis,” which Gramsci took over from Croce’s Neo-Hegelian concept of self-reflective practice. The question for politics, then, is the degree of social reflexivity in the recognition of technology. In this, Feenberg follows from Marcuse’s writings from the 1960s, which were concerned with the post-WWII world’s exhibiting what Horkheimer and Adorno had earlier called the “veil of technology,” or, “technology as ideology.” There was a deliberate attempt to overcome the prevailing Heideggerian critique of technology, in which humans became victims of the tools they had fashioned. As Heidegger succinctly phrased it in a barb directed against Marxism, “The laboring animal is left to the giddy whirl of its products so that it may tear itself to pieces and annihilate itself in empty nothingness” (“Overcoming Metaphysics,” 1936–46). Feenberg asks, what would it mean to overcome this reification of technology? And, what would it mean to overcome the political pessimism that the problem of technology seems to pose in capitalism?

The “philosophy of praxis,” then, is Feenberg’s attempt to recognize technology as self-alienated social practice, or to use Lukács’s term, “reified” action that engenders political irresponsibility, the false naturalization or hypostatization of activity that could be changed. Feenberg traces this problem back to the origins of social theory in Rousseau’s critique of civilization, the inherently ambivalent character of social “progress” in history. Feenberg locates in Rousseau what he calls the origins of the “deontological” approach to society: a new conception of freedom which is not merely a “right” but is indeed a “duty.” What Feenberg calls the “deontological grounds for revolution” in Marx, then, is the Rousseauian tradition that Marx inherited from Kant and Hegel, if however in a “metacritical approach.”

Why “metacritical?” Because in the Rousseauian tradition followed by Kant and Hegel, there remains the possibility of a theoretical affirmation and justification of society as being free already, where it would need to become free through radical transformation. Hence the peculiarity of “critical theory” in Marx. According to Feenberg, it was necessary for Marx to transcend the post-Rousseauian “utilitarian” framework of maximizing happiness through addressing “true needs.” For Feenberg, Marx overcomes the “split between reason and need,” or between freedom and necessity, precisely because freedom is understood by Marx as the transformation of necessity. Marx thus followed upon the most radical implications of Rousseauian recognition of “second nature.”

This bears on the centrality of the problem of “technology” in capitalist utilitarianism, which is subject to a precipitous lowering or narrowing of horizons through concern with needs that are falsely naturalized: what is “second nature,” a social product, is mistaken for “first nature,” or what Marx considered a “false necessity.” Such critique of ideology is how Marx overcame the potential conservative implications of how Kant and Hegel regarded “necessary forms of appearance” of social reality. Social practices such as those reified in “technology” seem responsive to necessities that can actually be transformed.

For Feenberg, there is a recurrent problem of neglect but also a red thread of rediscovery of this problem from Marx up to the present, with Lukács and the Frankfurt School providing key moments for recovery along the way.

This is a problem specific to capitalism precisely because of the centrality of labor. Marxism’s point of departure was to regard capital not as a “thing” in terms of the means of production or as “technology” but rather as a social relation, specifically as a social relation of the commodity form of labor. Marx regarded capital as labor’s own product in order to demystify the capitalist estrangement of social relations in technologized production. What Marx called the “capitalist mode of production” was a “contradiction” between the “bourgeois social relations” of production in labor and their unrealized potential beyond themselves, or “industrial forces” that had yet to be mastered socially – that is, politically.

The danger lay in accepting false limits to politics seemingly imposed by technology which poses “nature” as static where it is actually the existing social relations that are recalcitrant obstacles to be overcome.

However, capitalism is not only a problem of false static appearance, but also a “reified” or self-alienated dynamic, in which concrete practices or “technologies” change, but without adequate social-political awareness and agency. This is why the dynamics of technical change and its invidious social effects appear deus ex machina (literally a theodicy for Heidegger; techne as a god), and why it makes sense at all to characterize the problem in Marx’s terms as capital-ism. It is not a problem of “capitalist-ism,” that is, a problem of society subject to the greed and narrow interests of the capitalists, but rather a deeper and more endemic problem of overall participation in social practice.

This brings us back to the original Rousseauian problem of society and political sovereignty: the unlimited, free development both collectively and individually that Rousseau apotheosized in the “general will.” What does it mean, following Marx, that the “general will” appears in the form of “capital,” and, in the 20th century, in the even more alienated form as the imperative of “technology?” It means that the problem of capitalism deepened, and social freedom became even more obscure.

Feenberg provides an important Appendix to his book that addresses the history of Marxism as a phenomenon of this problem. There, Feenberg discusses the issue of Lukács’s “self-identical subject object” of the proletariat in the form of the Communist Party. For Feenberg, Lukács followed both Luxemburg and Lenin’s approaches to the problem of political party and social change. In Feenberg’s formulation, for Lukács, following Lenin and Luxemburg, the political party for proletarian socialism, or the Communist Party, was not only or even especially the “subject” but was at least as if not more importantly the “object” of the working class’s political action in trying to overcome capitalism.

In this sense, the problem of “reification” was not merely an economic or even “political-economic” problem (in the sense of the workers versus the capitalists), but was indeed first and foremost for Lukács a problem of politics. The party was objectified political practice. The question was its critical recognition as such. What had motivated Lukács’s recovery of Marx’s original point of departure, what Feenberg calls the “deontological grounds for revolution,” was precisely the phenomenon of how Marxism itself had become reified and thus went into political crisis by the time of WWI and the revolution – the civil war in Marxism – that had followed in Russia, Germany, Hungary, Italy, etc. It was Lukács’s attempt to explain the underlying problem of that crisis in which Luxemburg and Lenin had been the protagonists that led to his rediscovery of Marx, specifically in the form of the “subjective,” “conscious” or “Hegelian” dimension of Marxism that had fallen out as Marxism had degenerated or become “vulgarized” as a form of objectivistic economic determinism. The crisis of Marxism had led Lukács following Lenin and Luxemburg to a rediscovery of the potential for freedom concealed in capitalism.

The subsequent reification of Marxist politics in Stalinism presented a new problem that the Frankfurt School following Lukács had tried to address. This was paralleled by others, according to Feenberg, such as Merleau-Ponty and Lucien Goldmann. There were problems and some stumbles along the way, however, as Feenberg addresses in discussing the recently translated and published (2011) conversation in 1956 between Horkheimer and Adorno regarding the crisis of official Communism in Khrushchev’s (partial and abortive) attempt at de-Stalinization, which Feenberg finds them to have failed to pursue adequately, an opening taken up only by the 1960s New Left, encouraged not by Adorno and Horkheimer but rather by Marcuse (167–171).

Thus the New Left was another such moment of recovery for Feenberg, motivating an attempted further development of Marxist Critical Theory under changed historical conditions of society and politics. Feenberg’s book, both in its original and its newly revised form, is an ongoing testament to that moment and its continued tasks up to the present.