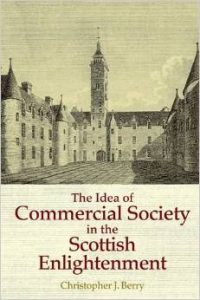 There is a widespread view in Marxist scholarship that pre-Kantian enlightenment thinkers did not have – perhaps even could not have had – a (non-theological) theory of history, much less a materialist one. Earlier enlightenment thinkers, approaching their social, political, and historical theories on the ‘standpoint of civil society’, conceived of human existence in terms of the interactions of isolated, antagonistic individuals, and read this market-based conception of social life back into past history, even into human nature itself. On this view, modern (non-theological) theories of history began with the idealistic accounts of Kant and Hegel, before Marx, the first to adopt the revolutionary ‘standpoint of the proletariat’, or that of ‘social humanity’, stood the dialectic right side up and made possible a properly materialist theory of history for the very first time. (I won’t provide any references here, since I don’t want to name and shame anyone. I do, however, want to note that this mistaken view is held by some otherwise excellent scholars, and that this is one of the main reasons why it needs to be addressed.)

This view is both deeply mistaken and harmful for our prospects of understanding earlier enlightenment thought, both in its own right and insofar as it influenced Marx; and there is perhaps no better place to start realising this than by reading Christopher Berry’s The Idea of Commercial Society in the Scottish Enlightenment. It shows convincingly, in impressive range and detail, how Scottish Enlightenment thinkers developed a conception of emerging commercial or capitalist society as a qualitatively new social formation, distinct from all previous ones, with new potentials for human enrichment and liberation, but also with its own troubles and concerns.

Berry’s first chapter sets the stage of the Scottish enlightenment and its members’ collective preoccupation with collective human ‘progress’, discussing the historical union of the English and Scottish parliaments, the growth of certain (usually smaller-scale) industries, trade, and banking, noting the particular importance that was granted to lawyers and the law in the country’s politics. From there he moves through discussions of the kirk, the Scottish university system, and the wide variety of clubs and societies, before discussing the pivotal influence of Newton, Locke, and Montesquieu. On Berry’s view, the ‘interweaving of the law, the church, the academy and “clubs” establishes one of the crucial “sociological” facts about the Scottish enlightenment’, one which helped build a mutually supportive environment with an ‘almost corporate identity’, in which thinking about ‘improvement’ and the meaning and nature of ‘commercial society’ was ‘woven into the fabric; it was not some detached academic exercise’ (17).

The second chapter examines the Scots’ theory of history, arguing that the famous ‘four stages’ theory – which the Marxist economist and historian R. L. Meek has rightly argued constitutes an important and original materialist theory of history – is best interpreted as a kind of natural history. As the author notes, distinctions between ages of hunter-gatherers, herders, and farmers were common at the time; what the Scots brought to the table was identifying a distinct age of commerce (38), of capitalism. The next three chapters then discuss how the commercial stage of society does compared to preceding ages with regard to prosperity and its distribution, the relationships between markets, the rule of law, and politics, and the development of freedom and the commercial virtues. Balancing the discussion of these positive themes, the penultimate chapter discusses the worries that Scottish Enlightenment thinkers had about this last stage of society with regard to things like the decline of military virtues and political participation, the harmful effects of an ever-more extreme division of labour (especially in industry), and the still-relevant issue of public credit. The last chapter brings these different strands together to paint the overall picture of how the Scots viewed the emerging brave new world of commercial or capitalist society.

Far from taking for granted a form of market-like atomistic individualism and an inherent tendency towards inter-individual competition and conflict, thereby reading capitalistic market relations back into all of history, the members of the Scottish enlightenment had a keen awareness of the novelty of the capitalism they saw emerging. The Scots ‘thought of themselves as living in an ‘age of commerce’, a notion which ‘jelled with their commitment to ‘improvement’’ (58), both of which require an appreciation of qualitative historical change.

It followed that to understand their own society, to evaluate the course and direction of any future ameliorative direction, meant understanding that change. The requisite understanding was to be gleaned by explaining the dynamics of that change by identifying causes. This gave to the Scottish theorists a strong motive to undertake historical research… The focus identified the key point of concern: how the commercial age had emerged from the distinctly different social formation that had preceded it. Perhaps, above all else, it is this interest in the process of social change that gave to the Scots their conception of a commercial society as something distinctive, as an integrated, inclusive form of life that was not prefigured by mercantile city-states. (58-9)

This raises an interesting point which I think the author could have developed more fully. For many Scottish enlightenment thinkers there was a close connection between a theory of history, a certain base-superstructure approach to understanding social institutions, and a kind of realism in prescriptive political theory. Adam Smith’s Wealth of Nations – and the earlier Lectures on Jurisprudence from which it in part derives – is an excellent example of this. There are four basic ‘stages’ of society defined by their modes of subsistence: hunting and gathering; herding; agriculture; and commerce. A change in one base mode of subsistence ultimately generates changes in government or polity, as well as changes in customs, law, and much more. On Smith’s view, for instance, government, or the state, does not properly exist in hunter-gatherer societies, which were largely democratic in nature, and begins to develop only in herding societies. Likewise, property law only begins to develop in herding societies, and greatly expands as societies move through stages of agriculture and commerce. Finally, this sort of view brings along with it a certain conception of the role of the philosopher qua advisor to legislators of particular societies. The appropriate virtues are not the same in a violent herding society and a peaceful commercial one; the best property legislation will look very different for structurally different societies; and so too will sensible public policy. The historical stage of one’s society determines both the limits and the potentials with which a legislator has to work, and which philosophers must incorporate into the prescriptions they give. The political economy, political science, history, etc. that Smith and other Scottish Enlightenment thinkers develop are not construed simply as dispassionate searches for descriptive truths; rather, they are essential for developing an adequate understanding of the inner workings of their contemporary world such that they can act to further the cause of ‘improvement’ and the general interest of their society. The conjunction and reciprocal determination of these three components – i.e., a theory of history, a way of understanding the development of social institutions, and a realist approach to prescriptive political theory – could, I think, offer interesting comparisons with Marxist and certain strands of anarchist thought.