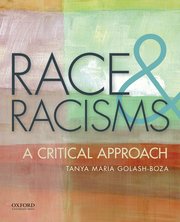 The year 2014 has been a banner year for academic publications on the nature of race and racism. Francisco Bethencourt’s Racisms: From the Crusades to the Twentieth Century (Princeton University Press) focused upon the European influence in the world, providing a historical account of the emergence of race as a concept closely linked to a desire for political and economic dominance. John Stone and Polly Rizova offered a neo-Weberian approach to analyzing racial conflict in everything from multi-national corporations to genocide-prone political regimes in Racial Conflict in Global Society (Polity Press). The four-volume Race and Racism in the United States: An Encyclopedia of the American Mosaic (Greenwood), edited by Charles A. Gallagher and Cameron D. Lippard, surveyed wide swaths of American history and culture to illustrate the centrality of race to the American project, while Nasar Meer’s Key Concepts in Race and Ethnicity (Sage) reviewed the evolution of academic thought on key subjects, with a greater focus upon the European, especially British, context. And these are only the some of the more generalist works published this year—volumes focusing upon such themes as racial violence, black activism, slavery, and racial politics abound seemingly beyond the capacity of any one person to read.

The proliferation of academic inquiry into the subject can sometimes make it difficult to approach for a teacher, especially one working in the United States, where many people (but especially whites) hold the view that racism is not a larger structure of oppression but an individual moral failing completely divorced from the dominant economic and political system. In such an environment, a textbook like Tanya Maria Golash-Boza’s Race and Racisms: A Critical Approach proves itself an immensely valuable educational tool, not only for how it summarizes centuries of history covering the evolution of race as a concept, but also for how it connects that history to the present-day situation with a clarity that students need, illustrating at each juncture how race does not exist separately from issues of class, gender, and citizenship. While focusing upon the American experience, the book offers occasional “global view” sections illustrating many of the same dynamics operating in the world at large, as well as a final chapter that highlights the cases of France, South Africa, and Brazil.

Golash-Boza opens with the New World, noting how European conflict with indigenous populations, combined with the emergence of the Atlantic slave trade, produced incipient racial categories to justify both, even if these categories did draw from a long European tradition of “otherness,” such as anti-Semitism. From there, she moves on to the relationship between race and citizenship, surveying the varying discourses surrounding the place of various groups in American society: “Wealthy whites valued African Americans for their labor power and thus drew on discourses that referred to their intellectual deficiencies and unique qualifications for hard labor. In contrast, during this period, Native Americans were not seen as a potential labor pool. Instead, whites’ primary concern was to appropriate indigenous lands and assimilate Native Americans into white society” (58). Her survey of racial ideologies covers two chapters, including one devoted to racial stereotypes in various forms of media, drawing a causal link between the portrayal of whites as more enlightened and the depiction of “the United States as the beacon of democracy, even as the U.S. military wreaks havoc on Iraq and Afghanistan” (114).

One of the keystone chapters of this book focuses upon white privilege and how the benefits of this privilege are largely class-dependent, being for poorer whites primarily what W. E. B. DuBois called the “psychological wages of whiteness.” This imagined state of racial superiority serves as a wedge dividing white and black people, a wedge which obscures the fact that both populations experience exploitation from many of the same sources. If white privilege constitutes an ability to ignore one’s race, to exist in a predominantly white environment (with upper- or middle-class careers and neighborhoods), then “the ability to ignore one’s race is clearly classed. Many poor and working-class whites do not share this privilege” (153). Of course, the blatant appeal to whiteness underscored much of the anti-populist political rhetoric of the late nineteenth and early twentieth centuries in the United States, given that farmer and labor protest movements, such as the Agricultural Wheel and the Knights of Labor, occasionally cultivated a cross-racial appeal; restrictive election laws targeted poor whites as much as they did poor blacks. While race has regularly been employed to secure a class divide, so, too, has class being employed to reinforce a racial divide. For example, a variety of federal policies implemented between 1933 and 1978 facilitated private home ownership, thus allowing Americans to collect tax savings and to use their homes as collateral for loans—policies widely touted as producing the broad middle class of the twentieth century. However, federal policies also encouraged residential segregation, and the overall benefit of these policies fell to whites because “(1) it was easier for white people to purchase homes, and (2) the homes that whites bought increased in value more rapidly than those purchased by blacks because of the perceived desirability of all-white neighborhoods” (274). Not only does home ownership constitute the largest portion of the “wealth gap” between white and black families, but the growth of the white middle class has created a population more invested in the racial and class status quo than before and thus has stunted the sort of radicalism that was common currency prior to the New Deal and World War II.

Golash-Boza devotes individual chapters to racial disparities in health, education, and criminal justice. The last one, in particular, highlights how such disparities arise not from accident but from specific government policies. The American “War on Drugs” illustrates this to great effect, with there being proportionately more white drug users in the nation, as measured by any standard (arrests, emergency room visits for overdoses, etc.), yet more African Americans sentenced to prison for drug-related felonies. Despite steady or declining crime rates in the United States, prison growth has continued unabated, largely under the influence of neoliberal policies which demand cutbacks on social services provided by the state save for military and police forces: “Insofar as neoliberalism diminishes opportunities and services for the poor, the state must ensure that working-class and poor people do not pose a threat to the rich” (314). In fact, the author acknowledges that prisons serve the function of locking up the surplus labor force while providing jobs to others. Police and military functions intertwine again in the patrolling of the southern border, the detention of undocumented immigrants in what are essentially prison facilities, and a deportation regime that remains a political touchstone for both major political parties—all highlighting the continued salience of race and nativism in American immigration policies. The current massive militarization of the southern border of the United States followed in the wake of the North American Free Trade Agreement (NAFTA), which had been sold as an economic boon to all parties but which has devastated participating economies, particularly that of Mexico, creating the immigrant “crisis” that has, in turn, produced the expected nativist/racist reaction. As Golash-Boza acknowledges in her penultimate chapter, racism and capitalism constitute conjoined crimes: “In the context of massive overall inequality, it makes no sense to ask questions about the utility of fighting against racism without paying attention to the economic inequalities created by capitalism…. On the other hand, perhaps racism is what permits this massive inequality to exist. Perhaps a world without racist ideologies would inherently be a more equal world” (403-4).

As thorough as is Race and Racisms, any general textbook such as this will overlook something—such, after all, is the nature of overviews. While lynching gets its due mention as the archetypal form of violence against black Americans, missing are some of the larger atrocities such as the Elaine Massacre of 1919 or the Tulsa Race Riot of 1921. The former is particularly illustrative of the role that race often played as a front the suppression of labor, as the motive behind white violence was based, in part, on the efforts of black sharecroppers in Arkansas to organize a union. On a related note, also overlooked is the phenomenon of nightriding (a.k.a. whitecapping), a form of group violence in which poor whites threatened or attacked black laborers in order to drive them from the employment sought by said whites; this was at the center of the devastating 1906 U.S. Supreme Court case of Hodges v. United States, which severely curtailed the federal government’s ability to protect the civil rights of (especially black) citizens. Finally, while the author does touch upon racially restrictive covenants, she ignores the larger phenomenon of racial cleansing, by which African Americans were forcefully driven from communities all across America, creating what are known as “sundown towns” due to threats reportedly levied against African Americans present after nightfall. Many such communities have become retirement destinations for those seeking more conservative, and less racially diverse, environments.

Race and Racisms is a textbook, with chapter outlines and summaries, plentiful images and illustrations, charts that render racial realities into hard numbers, sections highlighting particular individuals and their experiences, key terms in bold, discussion questions, and suggestions for further reading. Textbooks, generally speaking, are undervalued these days as scholarly enterprises, as most academics devote their attention toward papers and monographs—which, aside from the advantages for achieving tenure, can also be written exclusively for those already well initiated into the subject matter. However, writing for a broader readership has the advantage of forcing an author to lay out her argument step by step, to anticipate objections levied by those unfamiliar with the research or ideologically opposed to the conclusions reached. If scholars want their own work to have a real impact in this world, if they want to change the minds of their students rather than simply provide them with the information to be regurgitated in papers and exams, then they need to build these skills. Golash-Boza’s Race and Racisms provides one of the best models of this kind of work, drawing clear connections between indisputable historical facts and modern-day statistics that illuminate the continuing soul of inequality in American—and global—life, thus preparing students to think critically, perhaps for the first time, about a nexus of oppression that affects them personally, whether they knew it or not.