Marx & Philosophy Review of BooksReviews‘Seventeen Contradictions and the End of Capitalism’ reviewed by Anon. 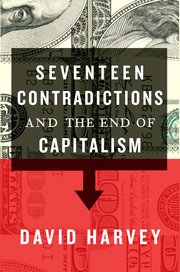 David Harvey
Seventeen Contradictions and the End of Capitalism

David Harvey has three aims in Seventeen Contradictions and the End of Capitalism (SCEC). First and mainly he wants to schematically analyze the contradictions of capital, the ‘economic engine’ driving the particular social formation capitalism. Second, he seeks to draw-out that analysis’s implications for anti-capitalist politics dedicated to creating a world substantially more democratic, egalitarian, and emancipatory than that which capital affords. Third, he aims to address what might cause the end of capitalism and, specifically, whether capital’s internal contradictions progressively undermine its conditions of existence. Although it doesn’t break substantial new theoretical ground, and nor is it without a few weaknesses of its own, Harvey largely accomplishes his main goal: to contribute to the ongoing debate on the nature of capital, the direction in which it is taking us, and what should be done about it.

The final three contradictions, the dangerous contradictions, are distinguished by the danger they pose to capital. The first, endless compound growth, stems directly from capital’s core operating objective: the endless accumulation of capital at a compound rate. The imperative for endless compound growth thus requires capital continually to find and realize sufficiently profitable reinvestment opportunities – and it must do so for a volume of capital that is itself accelerating in size. Harvey claims there are reasons to believe capital’s observed tendency over the past few decades to increasingly pursue non-productive outlets for accumulation – e.g., in fictitious capital markets and monopoly rents – suggests profitable outlets in production may be increasingly scarce. Harvey doesn’t elaborate this point, yet it is critical to the future of capital. In any case, the requirement for endless compound growth creates a dangerous ‘expand or bust’ contradiction at the core of capital’s operating mission.

The second dangerous contradiction, capital’s relation to (non-human) nature, is dangerous in a double sense: not only does it pose a threat to the reproduction of capital, it poses a threat to the reproduction of a sizable portion of humanity. Although others exist, including elevated rates of species extinction, perhaps chief among the problems arising from capital’s relation to nature today is climate change. If capital is to continue functioning, capitalism must now successfully respond to the massive accumulation of atmospheric greenhouse gasses – surpassing 400 ppm last year for the first time since the Pliocene Epoch about four million years ago – it is largely responsible for as it pursued its own accumulation of capital. The possibility of triggering irreversible and catastrophic changes in the Earth’s climate due to capital’s dependency on its fossil fuel infrastructure arguably represents the most serious and pressing danger to arise from capital’s relation to the rest of nature. Whether capitalism can, or cannot, create a decarbonized energy infrastructure which could sustain capital’s endless compound growth and, moreover, do so in a time scale short enough to avoid crossing potentially catastrophic thresholds in the climate thus becomes a key question.

On the whole, SCEC makes two important and broad contributions. Firstly and mainly it provides a strong and important schematic introduction to Marxist political economy by focusing on the contradictions of capital. Harvey wrote the book for a wide audience extending beyond the university and, as such, its clear prose and illustrative examples make it accessible to the non-expert. Equally important for any introduction is the quality of the guide. Although SCEC is not always up to date on the field’s current debates, it nevertheless strongly benefits from Harvey’s distinguished command of the scholarship. For those more familiar with Marxism and Harvey’s writings, the focused identification and elaboration of capital’s seventeen contradictions is still likely to provide insights by offering a conceptual map of capital’s contradictions and, perhaps, a different angle on familiar phenomenon, e.g., the contradiction between freedom and domination in chapter 14.

SCEC’s second main contribution is that it sketches some of the implications of its analysis for anti-capitalist movements. While undoubtedly brief, for which it has received some criticism, the lessons Harvey draws for left political praxis are valuable in developing a longer-term and broader-scale orientation. His criticisms of both the NGO sector, the ‘charitable-industrial complex’ as he calls it, quoting Warren Buffett’s son Peter Buffett (211), and the exaggerated prioritization of decentralization and horizontalism characteristic of autonomist, anarchist, and localist politics are valuable if not novel. “Decentralization is in any case often an optimal strategy for maintaining centralized control … It is nowhere more evident than in the state organization of money power in commodity markets” (49) Harvey says. In addition to these critiques of particular left tendencies, however, in the Epilogue Harvey offers a prescription in the form of 17 mandates derived from the contradictions to ‘frame and hopefully animate political praxis’ (294).

Despite these strengths, criticisms can be made, and two stand out. First, the book’s main argument explicating capital’s contradictions would have benefited from, in places, clearer identification of the specific forces in a given contradiction and greater elaboration of why these force are necessarily in mutual conflict. While different forces are clearly present within a contradiction, how and why these forces are necessarily oppositional is not always so clear. Chapter 10’s discussion of the contradiction of technology, work and human disposability illustrates this problem. In my view Harvey does not adequately distinguish the contradiction in chapter 10 from chapter 7’s contradiction between production and realization. Of the former Harvey says ‘Individual entrepreneurs or corporations see labour-saving innovation as critical to their profitability vis-à-vis competitors. This collectively undermines the possibility of profit’ (104). Because Harvey does not argue for a technologically-induced falling rate of profit theory, identifying technology’s contradiction in this way suggests it might more appropriately be considered as a mechanism within, rather than separate from, the contradiction between production and realization. Harvey does acknowledge this closeness but he doesn’t clearly elaborate why they are nonetheless distinct. To be sure, he does allude to one reason: further labor-saving developments in artificial intelligence and robotics could create ‘massive surpluses of potentially restive redundant populations’ (108). In so doing he hints that what might distinguish technology’s contradiction to capital from the production-realization contradiction is the way the former could create a large mass of structurally unemployed people inclined to challenge capital’s rule. Understanding the contradiction in this way suggests it is one of a political nature rather than a purely economic one. Nevertheless, whether this is how Harvey intends to distinguish the contradictions is unclear and emphasizing the political threat of structural unemployment thus blurs its distinction with another contradiction, that of universal alienation.

To make this criticism is not to suggest Harvey is necessarily wrong in arguing these forces are contradictions and Harvey’s analysis and discussion of capital’s contradiction are undoubtedly insightful. Yet while his examples often aid the reader by being concrete and illustrative, greater clarity and elaboration in identifying the specific contradictory forces, distinguishing them from those in other contradictions, and elaborating why these forces necessarily impinge upon one another would strengthen the book’s general argument.

The second criticism pertains to Harvey’s treatment of the end of capitalism. While he is clear on his position – that capital’s contradictions do not guarantee capitalism’s end – his discussion doesn’t adequately address the existing literature on the subject. I hoped Harvey would address the arguments in the recently published volume Does Capitalism Have a Future? (Wallerstein and Collins et al. 2013) for which he wrote a back-cover endorsement. In SCEC Harvey only mentions the book once (178) and does not directly engage its core arguments. This is unfortunate because even if differing in significant respects, Harvey’s Marxist geography arguably has enough in common with the macrohistorical sociology of the volume’s authors to produce a valuable and timely dialogue. Perhaps Harvey did not have time adequately to consider their arguments prior to SCEC’s publication but Wallerstein’s argument has been available since at least 2010 (Wallerstein 2010). Second, aside from macrohistorical sociology, Harvey writes only cursorily about the Marxist literature on the topic in SCEC. After stating his reading of Marx persuades him to see Marx as a revolutionary humanist rather than as a teleological determinist as other Marxists do – i.e., that the totality of Marx’s work suggests to Harvey not that Marx thought capitalism would inevitably terminate on its own accord, but that the so-called gravediggers that capital creates would in fact need to mobilize to bury capital to construct a new world – Harvey unfortunately does not elaborate either of these claims. He should have included the passages in Marx’s writings these Marxists find supportive of their view before elaborating passages that support his own view.

In SCEC Harvey shows capital to be an ‘economic engine’ which is highly dynamic and adaptive – although one which also does not chug along as seamlessly as it might appear. In endlessly seeking to expand itself at a compound rate, capital is constituted, driven, bolstered, and beset by numerous conflicting, diverging, and opposing forces – in short, contradictions. These contradictions thus produce a set of socioecological forces – perhaps more accurately sociogeological forces given the advent of the ‘Anthropocene’ epoch – and a complex and perpetually shifting ‘geosocial’ landscape a wide range of scholars and movements alike will likely find difficult to ignore. While thinking and constructing a new social formation/s substantially more democratic, egalitarian, and emancipatory than what capital allows is no straightforward task, David Harvey’s Seventeen Contradictions and the End of Capitalism, despite its limitations, provides a powerful analysis and conceptual map of capital oriented toward precisely such an aim.