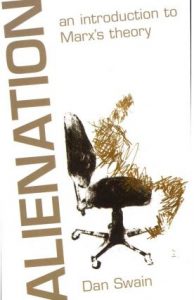 According to Marx, capitalist modes of socio-economic arrangement are invariably such as to condemn the majority of persons to a condition of ‘alienation’. Under capitalism, Marx argues, workers are estranged from the conditions of a fulfilling existence and experience disempowerment, frustration and insecurity. Dan Swain’s brief and accessible book, Alienation: An Introduction to Marx’s Theory, provides a helpful guide to this topic and argues for its continuing relevance in the early twenty-first century, and, indeed, for as long as capitalism remains with us.

During the course of his book, Swain discusses Marx’s various accounts of how, under capitalism, the majority are alienated from the labour process, from the products of their own labour, from the natural world, from one another, and even from their own selves. As Swain recognises, and as Allen Wood has noted, the sheer variety of phenomena to which Marx refers as instances of one or another species of alienation under capitalism presents difficulties for his interpreters. Indeed, the very title of Swain’s book is somewhat controversial, insofar as some commentators have denied that Marx presents a unified theory of alienation. According to Wood, for instance, the diversity of phenomena from which Marx claims that one is alienated under capitalism lack sufficient unity or commonality to be treated under a single overarching theory. For Swain, however, alienation merits attention as a common theme underlying various forms of estrangement and disempowerment emerging from capitalist modes of production. Marxism is an activist tradition, Swain insists, and an appreciation of the capitalist roots of many familiar forms of alienation experienced in the modern world should be instrumental in motivating the active pursuit of a socialist alternative to capitalism.

After a brief introductory section explaining its contemporary relevance in light of the 2011 riots across England, Swain discusses the intellectual background to Marx’s theory of alienation across two chapters, the first of which addresses the social, economic and political thought of the age of enlightenment. Although Swain notes the relevance of Hobbes, Locke, Smith and Ricardo in this context, particular attention is given to Rousseau, whose diagnosis of the evils of modern civilisation appears as a precursor to Marx’s theory of alienation. According to Rousseau, modern humanity is alienated from the natural conditions of its fulfilment and well-being, and this is ultimately the fault of a civilisation corrupted by inequality in the distribution of resources. Swain’s second historically focused chapter places Marx’s thought in its Hegelian context, explaining how Marx developed a materialist version of Hegel’s dialectic and radicalised Feuerbach’s secular interpretation of the meaning and origins of religious belief into a critique of existing modes of socio-economic organisation.

For Marx, capitalism emerges historically with the rise of the bourgeoisie to economic supremacy and the emergence of the proletariat as the class upon whose labour society most depends. Chapter three of Swain’s book discusses Marx’s understanding of the proletariat as ‘the universal class’. According to Swain, the proletariat merits this title in Marxist theory for a number of reasons. Firstly, the condition of the proletariat, or working class, is one of universal suffering; there is no sphere of proletarian existence which is unharmed by capitalist society and the worker therefore suffers universally. Moreover, the evil or injustice committed against the proletariat does not consist in the violation of any number of particular rights; rather, the working class is wronged in its essential condition, and therefore is victim to a universal abuse and injury. Most importantly, however, the proletariat has the character of universality because its own interests are those of liberated, post-capitalist humanity in general. According to Marx, the proletariat does not stand to gain from the preservation of a system of economic inequality, and will only liberate itself from capitalism with the achievement of a ‘class consciousness’ whereby workers become aware of their mutual interest in acting collectively to dismantle the capitalist state, and replace it with a condition of democratic collective ownership. Under socialist economic arrangements such as these, resource production and distribution are to be organised around the collective interests of the democratic community rather than those of a privileged elite. As such, there is to be no opportunity for a new economic class of oppressors to emerge and preserve its privileged position. Hence, Marx claims, the final triumph of the proletariat will mean the realisation of a classless society, and the end of class antagonism.

According to Swain, alienation from one’s own labour is the most fundamental form of alienation that Marx discusses. All other forms of alienation are ultimately grounded in alienated labour, or the disempowerment and estrangement which workers suffer from being compelled to put their time and labour at the disposal of an employer’s pursuit of profit. In selling one’s labour for a wage, one submits oneself to the control of an employer, whose principal interest in her employees is their capacity to make profit for her. The conditions of one’s working environment are therefore geared towards profit-maximisation without regard for the employee, who is left with little choice or personal control over her situation at work. Swain draws on current examples of alienation in the workplace to motivate the contemporary relevance of Marx’s approach. Call-centres, for instance, offer little opportunity for creative input on the worker’s part, and subject the worker to a highly regimented working environment.

As Swain explains, Marx thinks that it is creative labour and the deliberate transformation of the natural environment in the realisation of some ideal which distinguishes humanity from other animal species. As such, for Marx, the indignity which the worker suffers in being alienated from her labour is tantamount to the denial of her genuine humanity. This, perhaps, is why alienated labour is the most fundamental form of alienation under capitalism.

Alienation from the labour process is closely related, however, to alienation from the product of one’s labour, and this is the topic of Swain’s fifth chapter. Here, as elsewhere throughout his book, Swain employs a variety of current day examples to illustrate the contemporary relevance of Marx’s theory. As Swain points out, low-waged workers the world over are compelled into the daily expenditure of their labour in the manufacture of consumer goods, which they can never realistically expect to afford and enjoy for themselves. As such, the worker loses any natural sense of being invested in the product of their labour, which confronts them instead as a hostile reminder of their disempowerment, and of how their work serves the interests of those more powerful than themselves.

Of particular interest in motivating the contemporary relevance of Marx’s theory of alienation are chapters nine and ten, which address modern humanity’s estrangement from its natural environment, and whether Marxist theories of waged labour are relevant to modern forms of employed work. Swain’s chapter on alienation from nature confronts the myth that Marx was uninterested in environmental matters, and shows how Marxism connects the struggle against capitalism with the pursuit of a more environmentally responsible mode of economic production. Chapter ten offers a critical response to Hardt and Negri, according to whom Marx’s account of wage labour is no longer applicable in Western society, where employment in manufacturing has shrunk significantly, and the service sector has increased. Swain argues that workers still have little opportunity for originality in most kinds of paid employment, and that there remains for the worker little control over her working environment. As Swain explains, the alienation from the labour process which the worker experiences under capitalist conditions arises from the practical necessity of conceding control over one’s labour to an employer in exchange for a wage, and this form of worker disempowerment cannot be eliminated without the replacement of capitalism by a socialist model of common democratic ownership.

The remaining three chapters of Swain’s book discuss, in turn, Marx’s theories of species-being, collective control and proletarian revolution, thereby introducing the classical Marxist account of the socialist alternative to capitalist alienation. These chapters outline Marx’s theory of the mode of living most suited to human beings, and the socio-historical means of its realisation. Swain’s chapter on species-being also addresses some of the differing interpretations of this controversial Marxist concept. In closing his short and highly readable study, Swain refers to the events of the Arab Spring to motivate the continuing relevance of Marx’s calls for socio-political revolution, and although the cautious optimism apparent in Swain’s remarks on this topic may already seem out-dated, he nonetheless makes a compelling case for the enduring relevance of Marx’s theory of alienation.