Marx & Philosophy Review of BooksReviews‘Geopolitical Economy: After Us Hegemony, Globalization and Empire’ reviewed by Sudeep Regmi 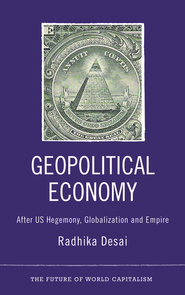 Radhika Desai
Geopolitical Economy: After Us Hegemony, Globalization and Empire

Sudeep Regmi is a PhD student in Economics at the University of Missouri (Kansas City). He is …

The express aim of Radhika Desai’s Geopolitical Economy is to dispel three myths: myths that have, under a cloak of cosmopolitanism, led to a simplistic and economistic conception of the advancement of capitalism, one which portrays an interconnected world impelled by the market alone and driven by the imperial ambitions of a singular powerful state along capitalism’s global material logic. These are the same myths that have also served as an apology for the said empire’s hegemony. We are talking here about the notions that the juggernaut of globalization has undermined the existence and sovereignty of states, making them ineffectual and simply irrelevant when it comes to both world economic affairs, and to a serious political economic analysis; that the twentieth century is a century of US hegemony, just like the nineteenth century was defined by the hegemonic ambitions of the UK; and that the post-war golden age was the result of a reluctant yet altruistic leadership of an otherwise isolationist US, which had to accept the role of a benevolent superpower only because power and responsibility was thrust upon it.

The first myth – that it is the market and not states that direct the economy – has tried to thoroughly de-politicize the economic, and has treated states as subjected to rather than subjects of capitalism’s advancement. The second myth – that the imperial ambitions of the UK before 1914 were replaced by those of the US after 1945 – sees the history of the world as the history of continuity of hegemonies, starting at least with the sixteenth century Italian city states, and seventeenth century Holland (9). The third myth – that the inter-war period Great Depression was the result of the powerless UK being unable to exert its influence on the world economy any longer, and the isolationist US being interested only in building a better world without erecting an empire (64), and that the post-war golden age was the age of hegemonic stability of the gold-backed dollar as the world’s currency – paints an innocuous story that, according to Desai, was based less on facts and more on mimicking the imperial ambitions of the US itself (4).

Collectively, these three myths have interpreted the world economy as being unified by the market, and driven by one powerful and benevolent yet reluctant hegemon. Desai’s main contention is that this is nothing but fiction, and that the actual history of the world – that is, the history of a multipolar world in which industrial competition between states translated into imperial competition (43), giving rise to several contender states, and in which the advancement of capitalism forced backward countries to make leaps and skip a series of intermediate stages (52) – flies in the face of each of these three myths.

That the character of nation states has changed in the ‘era of globalization’ is a frequent and familiar theme in the International Relations literature. Recall the all-too-familiar notions of the ‘post-Fordist state’, or the ‘new global order’, or the ‘internationalization of the state’. Common to all these narratives is a counterposition of the state and the market, as if globalization renders the market more powerful than states, and as if this power of the market over the state represents the diminishing autonomy, sovereignty or relevance of states. The most astonishing thing about all these notions is the absence of class analysis, and the reification of both the market and the state. Nor is there in these notions any acknowledgement that markets and states are both parts of a wider set of social relations. Desai recognizes the implausibility of this globalization dogma fully, and goes back to re-read not only Marx and Engels, but also Adam Smith, fleshing out the anti-free trade themes that were prevalent even in the eighteenth and nineteenth centuries, but could not force their way into the dominant ideology (36-43). The extensive study of the nineteenth century liberal idea of free trade that she undertakes in Chapter 2 reinforces her claims that the common ritualistic quoting of both Marx (and Engels) and Smith, and their subsequent interpretation as proponents of free trade and capitalism’s inherent cosmopolitanism, is baseless (19). Rather, as one has come to expect of her, based on her several previous publications on the issue, Desai does an admirable job of showing how the later Trotskyist notion of uneven and combined development has its origins in Marx and earlier political economists’ understanding of the world-order as a relation between producing nations (52). In a similar vein, she also notes the contributions of non-Marxist thinkers, primarily Keynes and Polanyi, who stressed the central roles states (should) play at the domestic level, and who criticized free trade and the gold standard, thus introducing acute insights into the geopolitical economy (not that of globalization, but of a world of nation-states (20)), in which it is up to the states to manage capitalism’s contradictions.

The thesis of uneven and combined development is at the heart of Desai’s project in this book. For not only does this thesis dislodge the myth that US hegemony succeeded UK hegemony, but also that there never was such thing as a US hegemonic stability in the post-war period. As Desai notes, the dominance of the UK as the first industrialized country was inevitable as long as much of the rest of the world remained unindustrialized. But it was also unrepeatable after 1870 (265). Both decolonization, and the unfolding of uneven and combined development, brought an end to UK dominance, but in doing so also ensured that no single hegemon could emerge anymore. It is true that emerging from the Second World War the US was the only powerful state, both in an economic and a military sense, but it could not successfully emulate the UK. Since territorial empire was no longer possible, US imperial ambitions had to be whittled down to replacing sterling with the dollar as the world’s currency. Furthermore, unlike the nineteenth century, when British colonies played a crucial role in maintaining sterling’s role, and allowed the UK to export capital, the decolonized twentieth century and the rise of contender states meant that no national economy could take up the role of hegemon, or of managing the world economy: exporting capital could do nothing but finance contender development (268).

The Hegemonic Stability Theory and its different versions, Desai notes in Chapter 5, rose to prominence only after the US had clearly lost its supremacy. In that sense, the theory is more an apology for the need for a hegemon, than a theory of the geopolitical economy of capitalism in the later twentieth, and early twenty-first century. This theory, for Desai, is as far from the truth as it could possibly be. Instead, she combines Brenner’s history of the long boom and the long downturn with the uneven and combined development thesis to produce an alternative history.

All in all, this book seeks to be a near-complete account of the past century of uneven advancement of capitalism, and the centrality of states in managing its contradictions. Anyone familiar with the neoliberal ideology of globalization, or the voluminous International Relations literature that contains apology after apology for a single world-order, knows that none of the three myths that Desai seeks to tackle have gone unchallenged. However, her contribution in this book has been to tie them all together, interspersed with an extensive study of the finer details of free trade imperialism (as she does in Chapter 2), of US attempts to emulate UK hegemony (Chapter 3), of postwar developments and the Bretton Woods era (Chapter 4), of the Hegemonic Stability Theory (Chapter 5), of the post-Bretton Woods period (Chapter 6), of nineteenth century globalization (Chapter 7) and the twentieth century attempts at building an empire (Chapter 8). In this sense, the book succeeds in its aim, and shows that the multipolar world and dominant ideology are at clear and extreme odds with each other.

Three points on which the book could have done better must be noted. Desai herself realizes that for a book that claims to be a thorough study of the multipolar moment in the geopolitical economy of capitalism, there is a disproportionate focus on the US relative to other contender states. A fuller study would have to undertake a detailed study of the development of these contender states vis-à-vis the US. A second point one notices is the less critical acceptance of Brenner’s contribution to the study of global turbulence, and little mention of the debates that have followed in the recent decades. Engagement with these debates would certainly give Desai’s book a broader foundation that fits her aims in the book better. A third point is that even though Desai looks favorably on non-Marxist critics of neo-classical economics and free-trade ideology (for instance, Keynes), there is hardly any mention of the Keynesian – or better put – post-Keynesian thesis of the centrality of states in global political economy. The single most important thesis regarding the crucial function of states in what is also known as ‘Chartalism’ is that the theory of money cannot be separated from the theory of the state. Acknowledgement of this would have gone a long way towards making Desai’s book a more complete and stronger account of the role of sovereign states in the geopolitical economy of capitalism. Despite all this, there is a lot of admirable scholarship in the book, and I can only wish that future work, of both Desai and others who share her perspective, will address the issues that have been raised here more fully.