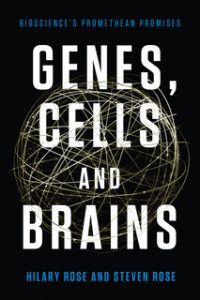 Hannah Proctor is a PhD student at Birkbeck College, University of London. She works on the history …

In 1969, Hilary Rose and Steven Rose co-authored Science and Society. Hilary Rose is a sociologist, Steven Rose a neuroscientist. The pair – who are married – met at the New Left Club in London. They were active participants in the political discussions and demonstrations that emerged following the tumultuous events of 1956, the Suez crisis and the Soviet invasion of Hungary (17). The possible social impact of Labour and Conservative Party scientific policy that dominates their early collaborative effort, now over forty years old, seems quaint, even innocuous, in comparison with the brave new scientific terrain they meticulously chart and sharply critique in Genes, Cells and Brains.

In a historical moment in which our emotions and actions are increasingly understood in biological terms, Genes, Cells and Brains is a forceful and timely examination of the origins and implications of current biological research. The philosophical and political ramifications are clear: the reduction of human life to biology encourages discussions of social and economic inequities to fade into the background.

Genes, Cells and Brains moves at a brisk pace, engagingly covering key episodes in recent scientific history. Though discussing divergent branches of scientific research, and weaving together different historical narratives, the authors cogently convey the dominant trends that unite contemporary biology. This is above all a story of the increasing commercialisation of science. As such, they trace how institutions, the role of scientists and the goals of research have been transformed by neo-liberal, market-oriented agendas, as well as discussing the broad changes wrought in our understanding of human existence that have occurred in the wake of these transformations.

Patents, profits and politicians all come into play in this narrative. Genes, Cells and Brains skewers various people along the way, at one point taking an amusing jab at Richard Dawkins for his failure to understand that sometimes a metaphor is just a metaphor. They claim that in bombastically declaring it is literally raining DNA, Dawkins falls into the kind of ‘quasi religious certainty that [he] elsewhere finds so objectionable’ (54). But J. Craig Venter, the man responsible for mapping the human genome, is the first major casualty on their journey through recent biological developments. Venter is taken to epitomise the newly emerged figure of scientist-as-entrepreneur. The scientist of yesteryear may have aspired to a comfortable institutional position and maybe a Nobel Prize, but today science has transformed into a lucrative and competitive mega-industry. Venter emerges as a savvy institutional player, adept at marshaling funds and jostling with his rivals, not to mention having a real flair for self-aggrandising presentation – the first human genome to be sequenced was Venter’s own. Their opening discussion of the Human Genome Project (HGP) also serves to introduce the key themes which animate the ensuing discussion: the convergence of science with business, the increasing importance of advanced computer technology, and the emergence of an understanding of human life as reducible to biologically determined factors. Moreover, despite generating vast amounts of profits, the HGP crucially failed to deliver the much-vaunted medical advances that were originally promised. As the authors ask throughout: if science is motivated primarily by the market who stands to benefit?

The subsequent discussions of evolutionary theory, eugenics and bioethics all delve further back in time, providing useful genealogies that situate contemporary science in history. The authors are quick to point out that the vestiges of the old are still with us. Eugenics, we are told, should not be understood as some historical aberration associated exclusively with Nazi race science, but as a theory that dominated Western European thought and whose influence can still be felt today – state eugenics programmes continued in Scandinavia through to the 1970s, and in Slovakia Roma women still face compulsory sterilization (133). Now the authors identify the rise of ‘consumer eugenics’, which would ultimately allow people to genetically determine and enhance their children’s features. But the more immediate means of profiting from DNA they discuss is the development of large scale biobanks, which have led to what they call the ‘global commodification of bioinformation’ (this is the title of the book’s sixth chapter). Biobanks were set up with the hope that they could precipitate new discoveries about hereditary illness and have also quietly ushered in new forms of state surveillance. This is Foucault’s ‘biopower’ in action.

Set against the backdrop of the global economic crisis and erosion of the welfare state, the authors are clear that those who stand to profit from current scientific advances are small in number. They also point to the ways in which the supposed neutrality of science is undermined in practice, instead functioning to uphold or compound prejudice and oppression. Race, class, gender, sexuality and disability all come into play here. The book contains numerous examples that illustrate how scientific research has profited from the exploitation of marginalised groups of people, from the global outsourcing of clinical trials (115), to the development of weapons aimed at ‘decapacitating’ the enemy (266), to the targeting of indigenous peoples in Peru for genetic research (46).

From a philosophical perspective, the authors outline how science participates in a pervasive ideology of individualism. They do not discuss how philosophers themselves have drawn from biological ideas – from Deleuze and Guattari’s rhizomes to Paulo Virno’s recent interest in mirror neurons, from Alva Noë’s work on embodied cognition to Catherine Malabou’s interest in neuronal plasticity.

In the book’s Introduction, the authors situate their work in the history of a project to democratise science. The thumbnail sketch they provide identifies three key moments in this history: the ‘social relations of science movement’ of the 1930s (focusing on the British engagement with Soviet scientists), the ‘radical science’ inspired by the social movements of the 1960s and 1970s (in which they were swept up), and the German Green movement of the 1980s.

What their brief account of the first moment occludes is the centrality of philosophy to the Soviet approach to science. ‘Proletarian science’ did not intend merely to benefit the masses, but proposed approaching nature in a manner that was itself non-bourgeois. This explicitly ideological approach was discredited by the infamous Lysenko scandal, in which the Soviet approach to genetics was proven to be fraudulent (although Soviet scientists were instrumental in the unseating of Lysenko, a fact that is often conveniently left out of sanctimonious Cold War era accounts of the scandal). The authors briefly mention the rediscovery of Friedrich Engels’ The Dialectics of Nature in the 1920s, and the impact it had on molecular geneticists in Cambridge (66). In this strange work, Engels draws on numerous examples from natural science to demonstrate the operation of dialectical laws in ‘the whole of nature, from the smallest element to the greatest, from grains of sand to suns, from protista to men’. (Engels 1883) The dialectic, he claims, extends eternally throughout the galaxies, both preceding and outliving the puny human race in its tiny ‘island universe’. (Engels 1883) The publication of The Dialectics of Nature in 1925 functioned to bolster an argument already raging among Soviet philosophers concerning materialism and the dialectic (on the debate between ‘mechanists’ and ‘dialecticians’ see Emery (1935) and Somerville (1946)). The victory of the dialecticians was declared in 1929, a conception of nature drawing heavily on Engels’ already anachronistic reflections thus came to form the basis of the Stalinist doctrine of dialectical materialism. But prior to the publication of Engels’ writings on nature and their subsequent ossification into dogma, genuine debates raged in the nascent Communist state about what would constitute a properly Marxist approach to nature. The powerful case made by Genes, Cells and Brains might be fortified by elaborating a radical philosophy of science that engages with these questions seriously. As Marx and Engels note in The German Ideology, ‘We know only a single science, the science of history. One can look at history from two sides and divide it into the history of nature and the history of men. The two sides are, however, inseparable; the history of nature and the history of men are dependent on each other.’