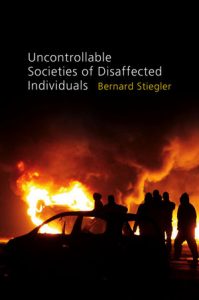 Ben Turner is an ESRC funded PhD student in Political and Social Thought at the University of Kent, …

What are the effects of unrestrained incursions of the market in everyday life, both on individuals and on capitalism itself? This is the question Stiegler asks in Uncontrollable Societies of Disaffected Individuals, the second in a series collectively entitled Disbelief and Discredit. Expanding on the description of the banality of consumerism and the subsequent political impasse this leads to in the first volume (The Decadence of Industrial Democracies), the issue under investigation here is the uncontrollable effects engendered in individuals by ‘spiritual misery’, a loss of belief and trust that Stiegler claims is endemic in our epoch (1). Written the aftermath of the 7/7 suicide bombings in London and the conviction in France of Patricia and Emmanuel Cartier for murdering their children, for Stiegler these events are phenomena of the becoming ‘obsolete’ of our current industrial system and the ‘despair’ produced by the modes of control used in prolonging it (2). His stated objective is to ‘prevent the installation of a system of terror … as a reaffirmation of belief’, and to show that this relies on resisting control and the replacement of politics with a form of populism (68-9).

As such, Stiegler’s thesis is situated firmly within the growing literature that criticises the cognitive and affective basis of contemporary capitalism and the effects it has on our behaviours. His contribution to this field in this work is threefold. First he situates this issue firmly within his own theoretical framework. Put briefly, Stiegler’s theoretical gambit, initiated in volume one of his multipart philosophical treatise Technics and Time, is that the human and the technical are co-constitutive. The latter is formed of techniques and experiences that are formalised in material prostheses as external forms of memory. These systems of memory enable the passing on of culture through generations, and have a privileged position in determining our individual thoughts and modes of existence. The extension of this thesis in Uncontrollable Societies … is that ‘spirit’ and ‘motives for living’ are engendered through particular historical articulations of this relationship between the human and the technical (4-5). Spirit, in French Esprit, does not refer to an ephemeral or religious understanding, but rather has connotations of ‘mind’. For Stiegler this term denotes the shared ‘psychic and collective’ processes of becoming that are embedded in the relation between material technical prostheses and the physical architecture of the brain, as shared collective memory (4). Control is the cause of the loss of this spirit, that is of the reasons to believe, trust and hope.

Stiegler’s second key contribution is a reworking of Gilles Deleuze’s notorious essay ‘Postscript on the Societies of Control’, which is now an almost canonical text in current analyses of capitalism. While retaining the key tenet, that modern societies presuppose an increased flexibility in the everyday life of the individual rather than assigning fixed jobs and professions, Stiegler makes additions to the workings of control. The most fundamental of these are understanding capitalist mechanisms of control through escalating calculation influenced by the ever increasing financialisation of everyday life, and most crucially, the impact this has upon belief. Calculation reduces human life to mere existence, rather than a more sublime form of ‘consistence’ (67). The realm of human spirit, reasons to believe and to live, belong to this latter category, and are said to not exist, but rather consist. ‘Objects of belief’ cannot be calculated crudely in the same way as profit margins, and are the root of a desire to live (67). As that which exists can only be calculated, the influence of new forms of media are what subject individual behaviour and spirit to calculation, and as a result destroy these reasons to live, engendering the system of terror that Stiegler wants to avoid.

The third key addition Stiegler makes is a re-consideration of Freudian Marxism, particularly Herbert Marcuse’s Eros and Civilization (43). While not opening an extended dialogue with the work (this is intended for the third volume of the series), there is an undercurrent of engagement running through the book. This is an insistence on abandoning the ‘discourse of desublimation’, the breaking of the bonds of authority that became a crucial part of the lexicon of the 1960’s student movement and the events of May 1968 (43). Albeit in a relatively subtle manner, Stiegler is entrenched in a tradition of continental philosophy that is still reacting to ’68, harshly condemning the mistaken aim of liberating human drives, which has now become the basis of the systems of consumer control. The mechanisms of calculation that Stiegler identifies have taken up the mantle of the liberation of desire, and put this towards increasing profits by appealing straight to the drives. Through calculation, Stiegler claims, this destroys desire’s ability to strive towards things that do not exist but rather consist, destroying human spirit.

This does not mean we have to abandon political struggle to a form of sublime authority in order to create ‘objects of belief’; a politics is put forward by Stiegler. However this politics, particularly among anti-capitalist literature, is an idiosyncratic one. Firstly, the bonds of sublimation are for Stiegler the only way for individuals to share a collective psychic reality (24). This undergirds the critique of the control society (which short-circuits these bonds), but also Marcuse and the ‘68ers. In contrast to this, allowing the bond of sublimation to be formed in turn allows their critique, in a ‘sublime form of transgression’ (25). The question of justice is a concrete, and convincing, example provided by Stiegler towards this form of transgression. While laws always exist, as the concrete form of authority, justice always exceeds this form, and is an object of belief in this sense and is ‘not reducible to the letter of the law’ (36). Authority and its political critique is the condition of giving people something to hope for and believe in, whereas the short-circuiting of this destroys these reasons. The result is cynicism and uncontrollable behaviour, the task of politics and critique being to restore belief.

Despite using language that is in places completely alien to the tradition, the method for restoring belief that Stiegler proposes is ultimately a Marxist one; he wants to see the eradication of capitalism and the poisonous effects it has on individuals in the modern age. However, it is highly unusual in that it combines two strands of Marxist thought, which we can, albeit crudely, summarise as economic determinism and vanguardism. He claims that ‘industry is pregnant with a new form of libidinal economy’, or simply the condition for the creation of spirit and reasons to believe (68). However this will only arise through the implementation of a new industrial policy that defends ‘capitalism against itself’, in order to engender its transformation into a new form of existence that makes room for politics as critique and the creation of spirit. Revolution, if we are to use that word, requires a vanguardism that takes care of capitalism in order to bring about the immanent transformation it provides the conditions for itself.

This approach is unusual, if not downright heretical, in that it claims capitalism needs to be protected in some manner. As a result, one might justifiably question the efficacy of Stiegler’s politics on several grounds. First, the production of spirit appears to be an abstraction that has no bearing on the real suffering of people under capitalism. Stiegler concentrates upon spiritual, rather than the physical and existential misery of those deprived by capitalism. He does, however, tear this away from theological conceptions of spirit through an engagement with Nikolas Sarkozy’s comments that we need a ‘politics of spirituality’ or religious spirit, which removes responsibility from the state to create the conditions for reasons to believe in the world (113). Second, one might wonder if taking care of capitalism is really an effective method for its transformation, given that the current situation is arguably a result of the self-preservation of capitalism in the face of crises. This is a view Stiegler arguably would not disagree with, but does raise the question of whether such a politics would always be one step behind capitalism’s self-transformations. Thirdly, the focus on authority gives a problematic conservative flavour to Stiegler’s work that is highly ambiguous. It is not clear to what extent this should take hold, even if he provides a systemic place for its transgression. Despite these remarks, Stiegler’s analysis of our contemporary situation is highly elaborate, and in certain respects convincing, and makes valuable inteventions in key dialogues that are taking place regarding the understanding of capitalism and how we should react to it. Most promisingly, Stiegler asserts that in the struggle against capitalism, a major motivation is that ‘Young people of the twenty-first century have a right to something other than to be policed: they have a right to a future’ (123). If only on the grounds of thinking systematically the task of restoring the foundations of belief in a future beyond capitalism, Stiegler is worth taking seriously.