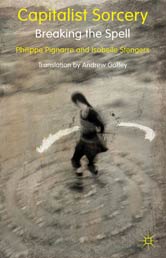 This is a relatively short but potent, and highly thought-provoking book which reassesses capitalism as a “system of sorcery” (40). It engages less with the labyrinths of Marxist theory than with the rhetorical attempt to persuade anti-capitalist fellow travellers and (crucially) potential neophytes, that critical and social progress consists in ‘inheriting’ Marx anew: specifically, in obtaining a pragmatic form of Marxism, one that “can be brought to the table” (16). The authors recognise the potential risks involved with associating with a pragmatic approach. This is anticipated early on: “To those who have learned to hate this word ‘pragmatic’, we will say: don’t you feel that the injunction to be ‘pragmatic’ is an insult to the ‘concerns’, the pragmata, that you were trying to address? Don’t leave this word in the mouth of your enemies!” (17). Risk-taking is one of the things this book is good at and the authors promote it as a practical device in order to ‘get a hold’ on how contemporary capitalism operates. Throughout, the reader is told of the imperative to “think, imagine and be adventurous” (7), to take even difficult and uncomfortable epistemological risks such as the suspension of what one knows in favour of a less secure, more sceptical stance, which would entail leaving “the safety of the regime of judgement for one of risk, the risk of failure that accompanies all creation, the risk of disappointment” (44). This is the pragmatic value of experimentation reaffirmed in radical clothing. If the book trades on one central idea from Marx it is to not merely interpret the world but to change it: or, in their own words, to do in order to “produce consequences that orientate action” (17).

The book is an unusually reflexive, rhetorical plea for praxis aimed at both the choir and the non-converted. The authors wish to transmit their propositions both effectively and “affectively” (9). The emphasis on concrete action makes sense when one learns that the book itself was inspired by a praxical event: namely, the 1999 Seattle WTO protests. The book is divided into four parts, each with a handful of short related chapters. Rather than file through these sequentially, the remainder of this review will try to pick out some of the key messages from the book as a whole. These are themes which recur throughout the work and which seem to me to be its most important messages. I finish with some overall thoughts and comments.

Seattle was a ‘cry’ which signified that “another world is possible” (3). ‘Inheriting’ it well requires an approach which is characterised more by risky affirmation rather than reassuring prudence. This requires a highly self-conscious critical approach that is prepared to learn, especially from opposing views. The authors play their self-styled roles as “sounders of the depths” (8) not to prophesise or to theorise transcendentally, but instead to suggest hypotheses that may be experimented with so that a firmer ‘hold’ may be had on an always elusive capitalism which is in no danger from denunciation alone: if it were, they suggest, “it would have collapsed a long time ago” (11). Denunciation is portrayed throughout the book as a redundant mode of critique, over-wedded to the impotent reiteration of “the confirmation of capitalist logic such as [Marx] diagnosed it” (13). Mere denunciation, we are also told, actually conjoins with capitalism in order to kill political engagement. Critical questions must be deployed politically not reduced to condemnatory generalities, and “the contempt for politicians is a deadly pitfall” (15). The job of work at hand is to re-create politics in a more imaginative yet still highly activist form.

Contra theoretical imperialism, and “thinking that goes round in circles” (19), the pragmatic form of Marxism on offer here does not believe it has achieved a “final rationality” (20) which others must soon wake up to. Protagonists are not “lost souls” but necessary and potentially “interested partners” in the struggle (22). Not everyone outside the Marxist orbit is necessarily either a ‘minion’ of capital, or a sleepwalking consumer dupe. Ideological explanations do not fully satisfy and it is better to say, “borrowing from the vocabulary of sorcery” (43), that those who do not think through the capitalist predicament, or who actively choose to row in with it as willing, instrumental oarsmen (and women), “have been ‘eaten up’, that is to say that it is their very capacity to think and feel that has been prey to the operation of capture” (43). In other words, ideology critiques lack reflexivity, they have not by any means proven their praxical worth, and now another way of gaining a ‘hold’ on how capitalism ‘captures’ is required. This involves “leaving safe ground” (46), being willing to learn from others, and believing in a form of ‘yearning’ or striving as opposed to progress per se, a yearning which is under no illusions and does not rely on transcendent myths of left or right; one which is willing to “think against the fairytale of progress with or without the Marxists” (61).

The final parts of the book close with a call for the cultivation of new, creative connections between various capitalist protagonists: connections premised on an experimental approach to struggle. It is also in the final sections of the book that the authors take perhaps their biggest risk of all, one they are keenly aware of, which is that of introducing the ideas and practices of neo-pagan witchcraft into the critical domain. If capitalism is “a system of sorcery without sorcerers” (135), then the art of witchcraft contains the means to “reclaim” what has been abducted.

The notion of witchcraft is introduced not as metaphor, or analogy but in quite literal good faith: they really do mean witchcraft. Neo-pagan witches are presented as radical pragmatists par excellence whose proposition is that of a practical mode of thought and awareness which seeks not to convert but to question, learn, and above all to protect oneself from capture. Their contribution is to offer a form of “resistance to submission” (136).

I began by calling this a rhetorical work – does it succeed then in persuading? In suitably pragmatist fashion I will answer that this is an empirical question, one which must be tested within the local immanence of each context in which it is meant to apply. In line with the book’s other main leitmotifs of sorcery, magic and witchcraft, I will follow that by saying the book itself is a spell of sorts. It has a disarming quality, a vulnerable yet assertive charm that manages to hold things together even as new and risky intellectual territory is explored. The authors are also very good at cutting off potential criticisms at the pass. This is largely because objections are anticipated and dissolved (or as John Dewey, who gets a mention in these pages, would say – ‘gotten over’ rather than solved per se) as they arise in the text, as the example used above demonstrates.

This book may not be to everyone’s taste but couldn’t Marxism do with a little magic these days? This reviewer, for one, was intrigued and on the whole convinced by the ideas and proposals put forward. There is little theory in the book so it is difficult to make a theoretical critique as such. In any event, the work seems aimed (cast?) at invoking a more visceral, active response rather than a conceptual one. The book is nothing if not interesting. I haven’t read anything quite like it in the Marxian tradition. That the authors have gone out on a limb to try to create something genuinely vulnerable and original is to be admired. You don’t read this book as much as think with it, ideally with an open mind. This edition includes a very good Introduction by its translator and editor who along with the publisher, has done the critical world a service by making it available to a wider audience.