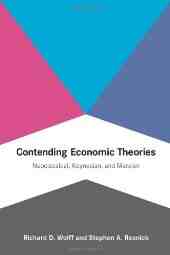 Contending Economic Theories: Neoclassical, Keynesian, and Marxian is a powerful book that compares the three economic traditions listed in its subtitle. The book is a very well-written and highly accessible intermediate level presentation of these traditions, with substantial development of the philosophical underpinnings, theoretical principles, and policy prescriptions of each tradition. This book is especially noteworthy for its rigorous and accessible account of Marxian economics (133-242). The comparison of these competing traditions helps to vindicate Marxian economics, social theory, and philosophy as a powerful account of the capitalist system, with particular advantages over the other two theories.

Rick Wolff and Steve Resnick were Professors of Economics at the University of Massachusetts, Amherst, USA. They were part of the five heterodox Economics Professors hired in 1973 and known as the “radical package”. Until Wolff’s 2008 retirement, and Resnick’s death in January 2013, they taught Principles of Microeconomics and Macroeconomics and Marxian Economics to several generations and 10,000s of students. Their interpretation of Marx borrows heavily from the work of Louis Althusser and Etienne Balibar, but they further develop their own theory of Marxian economics that is subtle, unique, and powerful.

Their point of entry is twofold.

First is the Althusserian notion of “overdetermination”. Overdetermination is a theory of causation. From this ontological perspective, “the economic and noneconomic aspect of society influence […] each other” (143). Objects of the social and natural world often are “simultaneously both causes and effects” (44). Each entity only exists as – or, is cause or constituted by – the totality of these different relations with all other entities. According to Wolff and Resnick, an overdetermination theory of causation clashes violently with the reductionist theories of causation characteristic of neo-classical (143) and Keynesian economics (358-9).

Second is the notion of class formation and its corresponding socio-political motivation. They develop their insights of “class” from Marx, especially Capital Volume III. They believe that class formation and socio-political motivation help explain social processes that many social scientists have missed (153-72). Specifically, they underscore the importance of the production, distribution and reproduction of social surplus labor (242-3). They maintain that if there is a deficiency in the understanding of class formation and socio-political alliances, the consequence is likely to be compromised policy and programs of social change, and an (un)intended empowerment toward the reproduction of capitalist social relations. Thus, according to Wolff and Resnick class is a pivotal phenomenon with both theoretical and practical importance.

Wolff’s and Resnick’s Althusserian theory of causation prohibits them from prioritizing class as an “ultimate” explanatory concept. Class is merely one cause of historical development and economic reproduction within any society. Nonetheless, “class as an aspect of social life has been neglected in and by other theories and theorists” (47). This neglect, by both neoclassical and Keynesian theories, ignores not only the existence of class, but also the antagonism between workers and managers, creditors and debtors, and the fact of exploitation, indebtedness, and surplus powerlessness. The neglect of class has prevented the awareness of how contemporary economies function and precluded the construction of alternative social relationships (154-66). Wolff and Resnick aim to remedy this neglect.

Contending Economic Theories: Neoclassical, Keynesian, and Marxian is primarily an updated version of their 1987 book. The subtitle of the new book appears to mend the inattention to macroeconomics in their 1987 Economics. It doesn’t.

Rather, they have separated the sections already available in Economics (Wolff and Resnick 1987, pp. 99-121) from the full chapter titled “Neoclassical Theory” and given them a separate chapter titled “Keynesian Theory” (105-32). They do add to this chapter a new and very short elaboration on “Post-Keynesian Economics and Other Reactions to Keynes” (125-9), and elsewhere a page on the Keynesian view of income distribution (359-60) not available in the 1987 book. However, these efforts are rather shallow and obtuse.

What they do add to the 2012 book that is substantial are two excellent chapters. The first is entitled “Late Neoclassical Theory”, and co-authored with Yahya M. Madra (251-310). The second is entitled “Oscillations in Capitalism and among Economic Theories” (311-46). These chapters are significant additions. Notably, the latter chapter does add commentary to the historical development of Keynesian economic theory.

They claim that, in spite of these “Late” developments, neoclassical theory still assumes that what drives “and determine[s] the economy [remains] preference-maximizing rational actors and their [structural] goal[s], like that of equilibrium” (309). Thus, the entry-point of wants (preferences), scarce resources, and technology have not changed (37-9), nor have the broader societal goals of mere (expanded) reproduction and the system’s tendency toward equilibrium (309). This is what Lakatos dubbed the “protective-belt” (Bhaskar 1997, p. 160) of neoclassical theory and constitutes its ‘hard-core’ principles (Bhaskar 1997, p. 176).

Wolff, Resnick and Madra are on very strong grounds when they claim that the entry-point, societal goals, and notion of essential stability have not changed from early neoclassical theory to “Late” neoclassical theory. However, it does seem to this reviewer that there have been significant changes within the discipline of economics. There are now far more mainstream economists questioning this ‘hard-care’ of neoclassical theory. Moreover, more and more models and papers contradict the ‘hard-core’.

Given more space I would argue it is the very efforts of theorists such as Wolff and Resnick that have forced the issue, and helped change the discipline and textbooks. At the same time, Wolff, Resnick, and Madra are correct to underscore that the heretical views and “Late” developments do tend to be consistent with the neo-classical theory’s ‘hard-core’ principles. There remain, however, strong reasons to believe that these developments are more problematic for the neoclassical research paradigm than is acknowledged by Wolff, Resnick and Madra. It is not clear whether the philosophical foundations/entry-point of neoclassical economics is actually consistent with some of the results of behavioral economics, (evolutionary) game theory, imperfect competition, and asymmetric information. I am more optimistic that neoclassical economists working within these “Late” developments may be in a position to sympathize with more Marxian themes of class, exploitation, and instability.

Causing further tensions in neoclassical theory is the financial crisis of 2007-8. The new chapter in Contending Economic Theories entitled “Oscillations in Capitalism and among Economic Theories” barely mentions the crisis beginning in 2007-8. This is a bit surprising, in that Rick Wolff has published books (2013, 2009a) and released a DVD (2009b) that develop in great detail the weaknesses of the economy prior to, and the ensuing crisis and financial collapse of 2007-8.

Wolff and Resnick forgo outlining the details of the financial collapse of 2007-8; instead, they develop the theoretical historical analysis of crisis in the neoclassical, Marxian and Keynesian traditions. These pages are highly accessible, and the results are very powerful. In essence, Wolff and Resnick point out that Marxian economics in its inception is a theory of imminent socio-economic crisis (319). Neoclassical economics has no corresponding tradition within its ‘hard-core’ (327-31). Instead, there is severe neglect of economic instability and capitalist development in neoclassical theory. The basic neoclassical policy recommendation is libertarian, and geared to minimizing regulation and state intervention.

Keynesianism begins to repair this neglect (331-6). Keynes’ work attempted to address this neglect, in “criticizing the neoclassical economics that he had formally embraced. Keynes directly confronted the economic depression” of the 1930s (333).

There are significant grounds of common engagement regarding economic crises between Keynesianism and Marxian economics. However, there are also major differences between Keynesian and Marxian (policy) responses. Marxist criticisms of capitalism viewed the Great Depression as an example of the inefficiency, waste, and injustices of capitalism as a system (332) and the immanence of crisis to the structure of the system. Keynesianism emphasized “how the state could correct or offset the effects of those structures to yield a better equilibrium with less unemployment and more output” (334).

Keynesian intervention was dominant from the 1950s to the 1970s. It then fell into decline, as neoclassical economics of nonintervention had a resurgence beginning in the late 1970s, becoming dominant again from the 1980s into the 2000s. The neoclassical over-confidence of the 1970s to the 2000s has been severely shaken following the crisis of 2007-8 (342). Many neoclassical economists have returned to Keynesianism, while at the same time there has been a recovery and validation of the Marxian perspective of capitalist crises as “intrinsic to the system, that their causes have never been overcome, and that the resulting suffering, wasted resources, and lost output demonstrate the inefficiency and injustice of capitalism” (343).

The chapters on “Late Neoclassic Economics” and “Oscillations” are great additions to Wolff’s and Resnick’s original 1987 book Economics. The final chapter (347-78) of the new book remains an outstanding exposition comparing the economic, social theoretical, and philosophical differences between neoclassical and Marxian economics. Contending Economic Theories will continue to be most celebrated for its chapter on Marxian economics. To this day it is perhaps the best 100-page introduction to Marxian economics that exists (133-242). There are plenty of competing monograph-length introductions, but none that are as brief and with as much political economy and philosophical depth and breadth as is found in Wolff and Resnick. The book is worth its purchase for this chapter alone! Wolff and Resnick demonstrate brilliantly the relevance and urgency of Marxian political economy and philosophy for comprehending and understanding the capitalist system and its failures.