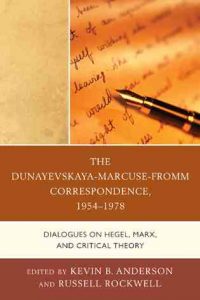 The Dunayevskaya-Marcuse-Fromm Correspondence, 1954-1978 contains correspondence from two activist critical theorists—Herbert Marcuse and Erich Fromm—and from Raya Dunayevskaya, a Marxist theorist and founder of a Marxist humanist tendency. The first half of the book contains letters between Dunayevskaya and Marcuse, while the second half contains letters from Dunayevskaya to Fromm, with summaries of Fromm’s letters. (The editors could not acquire permission to reprint Fromm’s portion of the correspondence.) The correspondence covers a range of topics, including interpretations of Hegel, and Fromm and Dunayevskaya’s collaboration on projects promoting a socialist humanism. The letters are preceded by an Introduction and followed by Appendices, including Marcuse’s Preface to Dunayevskaya’s Marxism and Freedom, four pieces by Dunayevskaya on Marcuse and Fromm, and Fromm’s Forward to Dunayevskaya’s Philosophy and Revolution. It is unfortunate that the contributions of Dunayevskaya, Marcuse, and Fromm to Socialist Humanism: An International Symposium, organized and edited by Fromm, are not included.

Raya Dunayevskaya was a secretary to Leon Trotsky in Mexico before breaking from him with C.L.R. James (author of The Black Jacobins, on the Haitian revolution) as the “Johnson-Forrest Tendency.” (She later broke with James.) Dunayevskaya’s News and Letters Party was unique among U.S. Marxist parties of the time: interpreting Hegel as a radical thinker who was necessary for understanding Lenin; embracing the Black Power, women’s and youth movements; and assessing the Soviet Union as “state capitalist.” There are now three competing organizations in the United States tracing their roots to Dunayevskaya.

Erich Fromm and Herbert Marcuse were Jewish German exiles who had been affiliated with the Frankfurt Institute for Social Research. Fromm was the author of major bestsellers in the United States beginning in the 1940s with Escape From Freedom and played a significant role in shaping public and left opinion, influencing Martin Luther King and the Port Huron Statement, and his radical speeches drew thousands. He had founded the first major U.S. organization against the arms race (SANE, named for his book The Sane Society) and by the 1960s was a national committee member of the Socialist Party of America (SP-SDF). Herbert Marcuse had burst onto the scene with his important book Reason and Revolution: Hegel and the Rise of Social Theory (1941), presenting a radical Hegel who was in harmony with Marx, and defending a vision of Marxism that rejected positivism and Stalinism. Marcuse was embraced by many in the New Left in the later 1960s, following Fromm’s earlier acceptance by the U.S. left, but from the outset his Reason and Revolution made him a prime ally for thinkers like Dunayevskaya and Fromm. During the period of the correspondence, the three thinkers were all famous for contesting the validity of the supposed divide between early and late Marx.

Anderson and Rockwell’s Introduction leaves most interpretative work to the reader. The Introduction’s sympathy for Dunayevskaya is apparent, however, and it focuses upon the concerns most relevant to her movement (such as the positions of the three thinkers on Lenin and Stalin, and Dunayevskaya’s interpretation of Hegel). One unfortunate patch, in this reviewer’s view, is the odd remarks about Erich Fromm’s “eclectic form of humanism” and the dismissal of Fromm’s interpretation of Marx’s philosophy as “prophetic messianism” (xxxix). (As I have argued elsewhere, Fromm’s “prophetic messianism” is not obscurantism but a central component of his understanding of strategy and his critique of Marcuse’s Great Refusal.) The characterization of Fromm’s work as “eclectic” falls into a stereotype of Fromm that is now being challenged and is disappointing in light of Anderson’s important work revitalizing Fromm, including publishing Fromm’s early criminological writings.

Many topics are covered in the letters without a clear pattern of development. The best way into the text, consequently, is to concentrate on a few key tensions. For one, throughout the letters, Dunayevskaya labels Marcuse and Fromm as “intellectuals.” For Dunayevskaya, the intellectual cannot commit to the revolution without abandoning the position of intellectual, and by contrast the workers have a privileged vantage point for understanding Hegelian dialectics. Marcuse tries in vain to convince her that she should try to connect with intellectuals, but this debate is perhaps the shallowest and least interesting of those in the correspondence, and her barbs at intellectuals are overshadowed by her own desperate search for intellectual contacts and approval. With the exception of some of the late, 1970s correspondence between Fromm and Dunayevskaya, the letters are not a dialogue but an exchange of information, occasionally punctuated by lengthy polemical essays by Dunayevskaya.

A more interesting tension concerns Hegel. For Marcuse, Dunayevskaya under-emphasizes the negativity of the dialectic. Dunayevskaya, who says that she learned to understand Hegel from mine workers, holds that Marcuse fails to see that Hegel has concrete and positive applications beyond mere critique. Like Georg Lukács, Dunayevskaya is enthralled by the basic Hegelian Marxist insight into working class subjectivity coming to know itself. She gives Hegel a close reading, but she conveys her enthusiasm in lengthy polemics that Marcuse finds lacking in theoretical care. Fromm, for his part, seems unwilling to engage in a dialogue on Hegel, and Anderson and Rockwell wrongly attribute this to lack of confidence of his knowledge of Hegel. Fromm was a product of a left-wing German Jewish intellectual milieu that was saturated in dialectical thinking, yet did not see its radicalism or philosophy as partisanship for Hegel. Fromm saw himself as a defender of a wider humanistic tradition tied to radical elements of the Enlightenment and including Spinoza, Lessing, Fichte, Goethe, Moses Hess, and Heinrich Heine, along with Hegel and Marx. Dunayevskaya’s restricted focus upon the line of influence from Hegel to Marx to Lenin was compatible with Fromm’s humanism but may have seemed to Fromm like an inadequate starting point for a serious study of Hegel’s meaning and relevance.

A third tension in the letters concerns Dunayevskaya’s confusion with Marcuse’s shifting philosophical positions in the 1950s and 1960s. Dunayevskaya’s reading of the trajectory of Marcuse’s work seems to be as follows. Reason and Revolution (1941) was a radical Hegelian Marxist text. Marcuse then applied Marx, using Freud, to a liberatory and feminist project in his book Eros and Civilization (1955). This book, Dunayevskaya holds, was followed by a deeply flawed and “pessimistic” book, Soviet Marxism (1958), which she considers to be an apology for Stalin. One-Dimensional Man (1964) is a slight improvement and a final, full recovery of his earlier revolutionary vigor occurs in Marcuse’s later work. Dunayevskaya’s view of Soviet Marxism as an apologetic for Stalin is undoubtedly flawed. Soviet Marxism is an immanent critique of Soviet ideology, but perhaps also an immanent critique of Marxism itself, which perhaps Marcuse already saw as too mired in technical rationality (223).

Dunayevskaya’s reading of Marcuse’s trajectory differs greatly from Fromm’s interpretation. According to Fromm (and this reviewer agrees), Reason and Revolution was a great work, and an unfortunate setback in Marcuse trajectory is manifested in Eros and Civilization (before Soviet Marxism). Eros and Civilization is often hailed as a radical synthesis of Marx and Freud, but the book never mentions Marx and takes a pessimistic and romantic tone: quoting Heinrich von Kleist and envisioning history as a mysterious circle. The book’s mythical heroes are Orpheus and Nietzsche’s Dionysius, not Prometheus (Marx’s hero), who is critiqued as a symbol of a “performance principle” that values work over enjoyment. According to Fromm, the entire period from Eros and Civilization to One-Dimensional Man is deeply problematic, and Marcuse’s early hopeful radicalism only returns in his later works, like Essay on Liberation.

Marcuse’s wariness of Prometheus points to a fourth tension in the letters, a tension concerning the proletariat’s potential for class consciousness. In 1960, Marcuse wrote to Dunayevskaya for input as he was writing One-Dimensional Man; he was arguing that the ideology of late capitalism in the first world had integrated workers into the system but wanted arguments on the opposing side. Dunayevskaya responded that not only was there desperation in the first world, but that many workers were in fact developing class consciousness, and sent him a pamphlet by Charles Denby, Workers Battle Automation. The discussion shifted to Hegel, whom Dunayevskaya argued correctly understands the potential of the abstract to become the concrete universal (hence, the possibility of class consciousness). Marcuse agreed on the importance of connecting theory and practice but could not follow in her optimism about the workers.

Finally, a few notes about the Fromm correspondence: First, Fromm convinces Dunayevskaya to weigh in on the emerging Marxist-Christian dialogue and encourages her to interact with Eastern European socialist humanists (the Praxis group, etc.). Secondly, Dunayevskaya’s study of Rosa Luxemburg through a feminist lens is met with interest by Fromm, and in her eulogy for Fromm, Dunayevskaya mentions his appreciation for Bachofen’s theory of matriarchy. Thirdly, the later letters between Fromm and Dunayevskaya are the closest to an actual conversation between the thinkers found in the text. In this reviewer’s view, the book demonstrates that Fromm is a more natural ally for Dunayevskaya than Marcuse: Fromm never wavers in his faith in the proletariat of the first world, and Fromm is better at grasping positive (in the sense of the “negation of the negation”) potentials within the present (dual power, experiments in worker self-management, small discussion and study groups, and party organizing).

This book will be most interesting to those with a serious and political interest in one or more of the interlocutors. The text has important documentary value, and its publication is timely, since the contribution of Marcuse and Fromm to the Frankfurt School is being re-evaluated and in this time of left regrouping in the United States, Dunayevskaya’s legacy is more important than ever.