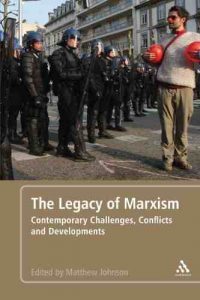 Marxism’s (or rather Marx’s theory’s) demise has been exaggerated. Such is the conventional wisdom amongst those who smile ruefully when the end of the oft-alleged evil Soviet empire is equated to the death of Marxist theory. This may be so, but what is Marx’s theory present significance? Academics in conferences make reference to it, and Socialist Worker Party activists still consider it a loadstone. Yet, intellectually, is it generating innovative, relevant new interpretations? Politically, are contemporary developments in anti-austerity activism – the Occupy movement to name but one – derived from it? Are the antis of our age, groups opposing Western hegemony and neoliberalism, actually proffering a Marxist alternative?

In The Legacy of Marxism, a number of seasoned Marx and Marxism interlocutors consider the Marxist tradition in light of this current conjuncture. According to its editor, Matthew Johnson, this collection ‘is an attempt to outline the challenges faced by those influenced by Marx and to put forward a range of ways in which the left, in its various, diverse ideological forms, can make real, substantive and positive contributions to contemporary debates and concerns’ (4). Authors address: being a Marxist today; Marxist theory’s relationship to global justice debates and to criminology; the seemliness of Slavoj Žižek’s popularity; post-Marxism post Laclau and Mouffe; and sinicized Marxism. There is also a chapter by Joseph Femia on Vilfredo Pareto’s complicated relationship to Marx’s theory (25-36).

The editor notes that this is an ‘eclectic’ (5) piece of work. In it, the authors are not uniformly answering the same question. Thematically, though, there is some contiguity. Chapters (a) such as Norman Geras’s on ‘What does it mean to be a Marxist?’ (13-23) and Alan Johnson’s (37-55) on Žižek’s unmerited stature speak to the fractious relationship of Marxist doctrine with liberal political philosophy. Some chapters (b) ‘focus on the practical application of Marxism and the influence of local conditions’ (5). See Lawrence Wilde’s reading (117-33) of Martha Nussbaum, promoted by Marx’s odd absence from mainstream global justice discourse, Ronaldo Munck’s comments on development (75-89), Mark Cowling’s answer (135-50) to the query ‘Can Marxism make sense of crime?’, and Andrew (Chengyi) Peng and Terrell Carver’s exchange (151-69; 171-82) on the encounter between Marxist state theory and Western notions of governance and jurisprudence in China. In the collection’s final chapters (c), by Oliver Harrison and Stuart Sim (183-98; 199-211), the points of contention of post-Marxism, such as revolutionary agency and fidelity to the classical Marxist project, are dealt with.

To start with (a), in Geras’s and Johnson’s contributions, all is not well with Marxism. After a fascinating analytical discussion on what it takes to call oneself a Marxist (how can two people support the same propositions as stated by Marx, dislike the same statements, yet one self-identifies as Marxist while the other would not dream of doing so?), Geras takes aim at ‘the persistent moral failure’ (21) of the Marxist left and its supposed ‘my enemy’s enemy is my friend’ approach to international affairs. For him, the ‘“we-are-all-Hezbollah”’ (20) banners in the demonstrations following the 2006 Israeli attack on Lebanon are a case in point. In Johnson’s aphoristic condemnation of Žižek’s musings, a Marxist poster boy is unmasked as a Blanquist apologist for ‘Linksfaschismus’ (47). Paul Bowman’s chapter on Žižek is also in this vein (57-74). Matthew Johnson’s offering (91-116) adds to the impression that Marxism has been heading off in unappealing directions when it comes to opposing imperialism and war in the Middle East. Hostility to US foreign policy justifies blanket opposition to perfectly reasonable, progressive liberal measures sponsored by the US and its allies: ‘[t]his is simply antithetical to Marx and should, I suggest, be antithetical to twenty-first century Marxism’ (109-10).

In (b), Marxist theory provides a boon for various disciplines. Wilde asserts that Marx can be mined for normative purposes. Marx is not simply the man who argued that workers have no ideals to realize; he had an ‘implicit moral position’ (122). Via a close examination of Nussbaum’s eudaemonistic viewpoint, Wilde flags up her and early Marx’s accord. Both posit an empowered subject. But the liberal Nussbaum misses the structural dimension underpinning Marx’s ethics. To exhort, say, the UN to up its cosmopolitan game is to ignore the circumstances in which it operates. In Cowling’s chapter on criminology, the reader is briskly escorted through some Marxist perspectives on crime. One could just opt for alienation or the category of the lumpenproletariat to explain criminality, but this would be mistaken, too vague and too moralistic. Cowling is more positively inclined towards the reproduction of the criminal justice system and the extension of our notion of criminality (the victimless crimes of corporate swindles, for example). Peng and Carver draw attention to a striking development in China: sinicized Marxist constitutionalism. ‘The deep influence of the Western liberal constitutional paradigm’ (153) has seen a distinctive response amongst Chinese movers and shakers. Peng’s quite theoretically superficial conclusion is that people in China are talking about the liberal democratic notion of legality in the context of one-party rule. Carver’s reply to Peng’s points emphasises the import of China’s contentious relationship with the constitutional paradigm, and highlights the openness of Marxist thinking with regard to the function of the state and to the liberal democratic notion of statecraft.

Harrison and Sim in (c) cover the mini-legacy of post-Marxism. Harrison starts from the ‘ambiguity’ (184) of the Marx bit of post-Marxism à la Ernesto Laclau and Alan Badiou. Arguing these two men, in their neo-Marxist conception of revolutionary subjectivity, depart from Marxian ground, Harrison pinpoints Mao Tse-Tung and Antonio Gramsci as the forefathers of post-Marxism’s fascination with the creation of transforming activist coalition. Marx and Engels sought to promote the cultivation of a revolutionary vanguard, a ‘subjective supplement’ (187) to capitalism’s objective decay. Laclau, on the other hand, presumes no given proletariat unit to revolutionise. The politico-discursive construction of this entity is the task at hand. For Badiou, crises of capitalism do not find a fully formed counterpart, a waiting revolutionary subject; it is only in these events ‘through a radical commitment’ (193) that a subject emerges. There is a newness attached to this birth of subjectivity that does not sit well with Marx’s good old ready and waiting working-class. In Sim’s review of the post-Marxist field, he asks ‘what can we claim for post-Marxism?’ (201). His answer is: post-Marxism. Complete with a rich and varied tradition, Marxism plus has a cachet. For instance, Hegemony and Socialist Strategy’s famous variant on the project kicked off by Marx is timely, given it is a Marxism at home in these cultural times. The social certainties of modernist conceptions of linear development and essential unity are no more.

Clearly, because of the miscellaneous nature of The Legacy of Marxism, it is hard to do justice to the reviewer’s twin tasks to inform and to evaluate. To describe the intricacies of each author’s contribution, and to assess whether this book gives the reader a better understanding of Marxism today, is problematical. For example, how does one convey the details brought up in Munck’s article, or capture the discussion on SMC, whilst corroborating or not critical assessments of Marxism’s present-day woes? In this respect, to sum up the collection by way of single article, Femia’s on Pareto, is a little roguish, but this article captures the key affectation of this volume.

In Femia’s chapter, the message is an old one. Marx is not the meta-social scientist folklore has purported him to be. For Pareto, Marx is someone, rather, who provides insights into our socio-historical relations. When it comes to Marxism’s ‘a priori’ (35) tendencies, these should be put to one side. The saliency of Marx’s insights regarding ‘class conflict and economic forces in history, the demystification of so-called objective morality’ (35) are cause for serious deliberation, however. As Marxism is treated as a curate’s egg by Pareto via Femia, so should Marxism today be. Marxism has plenty not going for it: false prophets, dodgy lines of argument and pointless partisanship in relation to liberalism. This said, it still carries a certain something that means, like moths to the proverbial flame, scholars and activists return.

Marxism, the mixed bag, seems a rather uninspiring conclusion; the sexiness of some type of existentially stimulating Hegelian incantation, for instance, a long way off. This, though, is hardly where Matthew Johnson and his contributors are trying to signpost readers. The Legacy of Marxism does not provide anything approaching a study of Marxism in use. Its primary purpose, to contribute to debate, is, as is often the case in the current academic marketplace, primarily to make sure that a commodity called Marxism remains in circulation. The collection renders Marxism a fairly solid, Anglosphere-inclined profile. By providing such a broad range of Marxist readings, it will no doubt help to sediment the consumable effect of Marxist theory, a product for select outposts of the publishing industry, the demand for room bookings on the conference circuit. In this sense, Marxism is indeed alive, something to come and talk about.