Marx & Philosophy Review of BooksReviews‘Originary Technicity: The Theory of Technology from Marx to Derrida’ by Arthur Bradley reviewed by Matthijs Krul 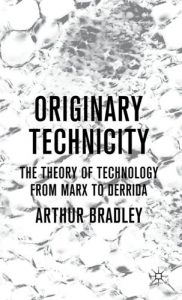 Arthur Bradley
Originary Technicity: The Theory of Technology from Marx to Derrida

Arthur Bradley, Senior Lecturer in Contemporary Literature and Critical Theory at Lancaster University, has written Originary Technicity as a readable critical engagement with continental philosophical anthropology and the philosophy of technology. More specifically, the book is essentially a literature review of ‘originary technicity’ – by which is meant the manner in which the human subject is not only the producer and user of technology, but is and has always been constituted by technology in turn. Departing from the thought of Jacques Derrida and his critique of the history of philosophy as insufficiently taking seriously the technicity of human thought, experience, and action as technically constituted from the outset, Bradley systematically analyses the work of Marx and Engels, Freud, Lacan, Heidegger, Derrida, Stiegler and finally a range of ‘posthumanist’ authors such as Haraway and De Landa. Many other philosophers of an anthropology of ‘technics’ are also considered.

Bradley’s purpose in all this is to argue that in each case there is a further step towards integrating the technic, retroactively and prospectively, into the self-conception of the human subject, ever further technicizing the human and moving beyond the understanding of technology as ‘merely’ a tool by and for an independent reason embodied in a Cartesian mind. Yet, according to Bradley, none of the authors discussed succeed entirely at persevering in this quest. When their philosophies of technology are held under the light, there always remains a ghost in the shell, a remainder of an independent, self-constituting human subject which escapes total subsumption into the technical constitution of Aristotle’s physis. As he explains in the introductory chapter, the author wishes ‘to argue that the theory of originary technicity from Marx to Derrida is – despite its claims to the contrary – not technical all the way down’ (15).

Marx and Engels are seen as founders of a philosophy which locates our originary technicity as humans in the dialectical interchange – Marx’s now famous ‘metabolism’ – between humans and their environment, from which they derive their tools that in turn shape themselves, in an infinite dialectical interaction. But this is not sufficiently thorough, as there remains the human essence that is the subject of Marx and Engels’ notion of emancipation, the core of humanity that is the locus of human flourishing, and that Bradley sees as preceding their anthropology of homo faber. Similarly, Freud and Lacan’s much more psychological and idealist theory of originary technicity, located in the mechanical-like symbolic order of consciousness, is insufficiently completely free of the independent human subject because of both thinkers’ insistence on the independent capacity of consciousness to recognize and reflect upon itself. Heidegger, especially in his later works as exemplified by his writing on das Gestell, does do away with this in his emphasis on the ontological nature of technics and its fundamental determination of the human experience, but does not escape this either – his very ontologization presents itself as an unfolding of an essence which in some manner is thinkable by the philosopher as such from an independent vantage point, as this latter day Plato would from his Black Forest hilltop.

And so it goes for Bradley. His discussions of Derrida and Stiegler are perhaps the most engaging parts of the book, and provide an excellent comparative discussion of their respective understandings of technics and temporality, wherein Stiegler attempts a more consciously materialist position by understanding memory and temporality not as human phenomenology to be preserved or regained against modern life, but as itself fundamentally constituted by and through our technology. This is surely a subject which deserves a book of its own (and Stiegler has indeed written much on this, also from a political economic viewpoint). The ‘posthumanists’ attempt to do away with the human viewpoint altogether, as best they can, either by positing the need for the self-positing of humans as one with technics in a cyborg role (as with Haraway), or by writing histories of human experience from a non-anthropocentric viewpoint, like Manuel De Landa and Jean-François Lyotard. Yet always, as Bradley to my mind convincingly argues, the irreducibly human creeps back in; never is the self-reflectiveness of the technic entirely accomplished, and humanity seen as the fully determined producer of those materialities that determine it.

Here, however, we come to the crux of the book. As a critical literature review, this succeeds very well, and Arthur Bradley is to be complimented for writing such a complicated comparative study of modern metaphysical philosophy in a by and large engaging, lucid and understandable style. Notwithstanding all this, it is not clear to what extent the critical argument can survive the test of establishing its philosophical or political purpose. The work’s lucid critiques of the insufficiently systematic nature of the de-anthropocentrisation of philosophy of technology are well-taken, but if anything this suggests to the reader the fundamental impossibility, never mind the undesirability of undertaking such an enterprise. My inclination is to argue this is an inescapable effect of the book and its argument as a product of language; for all its critical purpose, Bradley’s book is nonetheless a work by a human for humans. We do not know what a thorough-going understanding of humans as producers determined by their own technics would look like when undertaken from the viewpoint of technology as a phenomenon entirely divorced from human subjectivity, just as we cannot know any other subject entirely divorced from human subjectivity.

This is not to resign ourselves to arbitrariness and idealism, but to understand that if we seek some degree of foundationalism in philosophy, it cannot be found in the Ding an sich, but only in the social, through which our language (and thereby any philosophical argument whatever) is constituted. This can be in the realm of applying the facticity of our knowledge of the material world to the self-reflective, retroactive understanding of the human subject, such as in Engels’ discussion of the role of the hand in the transition from ape to man (which Bradley, via Leroi-Gourhan, does not fail to point to). It can also be in the form of a dialectical understanding of the relation between language as constituted by the social, and the role of our technical metabolism with nature in shaping it, and thereby our self-consciousness. There are, no doubt, many fruitful avenues here for further metaphysical enquiry. But without such a social grounding and a willingness to let humans be their own subjects, the philosophical quest will be a fruitless search for the ‘view from nowhere’. To that, one is inclined to cite Dr Johnson’s classic rebuttal of Berkeley’s idealism: ‘Sir, I refute it thus’.