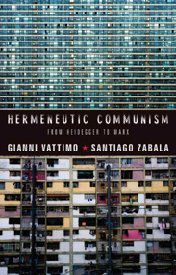 Dr Bradley Kaye is an independent scholar working as an editor at Edwin Mellen Press. He has a …

By attempting a fusion of post-metaphysical thought with the interpretive capabilities of communist criticism, Vattimo and Zabala have accomplished something unique and prescient. Hermeneutic Communism, while being a remarkable accomplishment in the field of Marxist theory, also contains several years’ worth of what one might call observations directed towards contemporary political events. At first, they offer a new approach to the hermeneutical approach to Marx’s famous line, ‘philosophers have only interpreted the world in various ways, the point is to change it’ by claiming this was not a classical refusal of the critical power to interpret. Rather, they hold that Marx meant that the only way actually to change the world is to alter its interpretations.

In this sense, hermeneutics and communism dovetail nicely with one another, by offering philosophies for the weak and the marginal. They maintain that, often in philosophical discourse, there is an illusory antagonism between pursuing the truth and one’s responsibility toward the wider community. To be committed to the truth takes an inquiring mind that does not lose sight of the subject’s engagement with the world as a being among beings involved in it.

This is why they say, “The world of hermeneutics is not an `object’ that can be observed from different points of view and that offers various interpretations; it is a world in continuous revolution” (87). The first thinker to make this radical claim was someone who is often cast as being at odds with communist thinking, viz. Nietzsche. In turning to Heidegger, the conversation becomes subtle in the sense that if there can be a communist hermeneutics, one must start from the presupposition that there is no unified vision of reality. In a purely postmodern move, Vattimo and Zabala offer a heterogeneous anti-essentialist view of what the concept of communism is, not only in theory, but also in practice.

Interestingly, this book was written during the last few years of George W. Bush’s Presidency and the initial phase of Barack Obama’s term in office. The Iraq War had yet to be fully completed, and President Obama had yet to live up to his Nobel Peace Prize. The last section is entitled, “Chavez: A Model for Obama?” with the implication being that true socialism is not necessarily being implemented in America, but rather in Latin America. The chapter which I found to be the most concrete of the book centered around the promise of a new, anti-neoliberal communism emerging that has a hermeneutical inspiration. In this sense, hermeneutical communism runs contrary to the old Stalinist or Maoist universalisms that have “shed blood throughout the world” (138).

In fusing the power of hermeneutical discursive disagreement via a multitude of interpretations playing out differentially, one can surmise that the end result will enhance democratic processes by allowing ‘weak’ voices to be heard. Questioning the social relations of production constitutes the end result of this opening up of democratic discussion, but as the authors point out this does not happen automatically. Anti-foundationalist philosophies must be allowed to flourish in order for this discursive open-mindedness to materialize and gain acceptance. Because of this, there is a lengthy discussion of this process by becoming “unaccustomed to living according to legitimations and grounding values”. Only thus can thought become “post-metaphysical” (100).

By doing this, philosophy becomes conversational rather than tied to meta-narratives which seek to present subjects with timeless, universal, and essentialist Truths. More importantly, the point the authors do not make, but I feel they should, is to think about this hermeneutical discursive process as creating spaces for atomized individuals to form relations of solidarity through singularity, rather than conformity. While they talk extensively about Slavoj Zizek, I believe this work would have benefited immensely from a greater engagement with Alain Badiou. In my opinion, this omission loses sight of some important discussions dealing with the conception of the Event and Singularity that could open up new avenues for a hermeneutical approach to communism on a micro-political, perhaps even inter-subjective level. Vattimo and Zabala do an excellent job discussing macro-politics, and this is an amazing book in dealing with “History” (with an upper-case H) – but it almost never discusses what Gilles Deleuze calls “the fascism of daily life”; and perhaps that was never an important point for them.

It also strikes me as interesting that this book adds to a growing list of recent Marxist texts that turn away from economistic interpretations of revolutionary change. Merely re-appropriating wealth through re-distribution is not enough truly to change the way the Subject’s total immersion in repressive discourses can put a vice-like grip on his or her political imagination. However, there are fundamental flaws in some Marxist rhetoric – rhetoric that amounts to economic vulgarism – which this book addresses.

For instance, the suicide rate among wealthy, unmarried, Protestant (or atheist) white males living in rural environments in America is double the next closest demographic. In fact, black women in America, who constitute the poorest economic class, also constitute the lowest percentage of suicides per capita. So, while most Marxists will continue to bombard us with economistic interpretations of consciousness and subjectivity, the basic unspoken truth that needs to be addressed by all Marxists is a Durkheimian one. Anomic personalities are alienated personalities. This has little to do with economic deprivation, but is due rather to the modern (and postmodern) tendency to wards social normality (anomie) that is exacerbated when a person lives in solitude and has access to a high disposable income without any traditional mores to provide a sense of moral continuity. And in this book there is no discussion of the turn to Liberation Theology in Latin America to fill this long-standing theological and ethical void in Marxist theory.

The biggest problem I see with the assumption that fusing Marxism with postmodernism will provide the magic bullet that will somehow necessitate communism, is this point about anomie. If we open up heterogeneous discourses and democratize all aspects of life, then not only do we lower the bar for creating solidarity movements with some pretty awful people (think: Occupy Wall Street cavorting with heroin addicts and rapists); but also, we fail to conceive of a society based on social stability, and by extension sustainable subjectivities, which produce happy people. Perplexingly enough, I believe talking about happiness and love may actually cause a sense of revulsion among most academic Marxists.