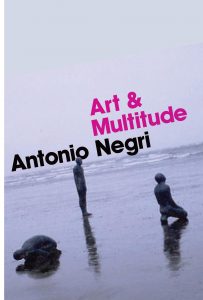 Art and Multitude collects a series of Negri’s letters on the relationship between art, politics, and ontology. The first seven letters, written over a three week period in 1988, reflect on the themes of the abstract, the postmodern, the sublime, collective work, beauty, and constructing. Sad, painful, and nostalgic at points, each seems hopeful to restructure a vibrant and viable political left after the failure of ’68. The eighth and ninth letters, written over a decade later, offer both self-criticism and extensions in his thought.

As a collection of letters, the volume does not present a unified, linear argument in the way other books might; instead, Negri presents a dense cluster of reflections, arguments, and anecdotes that turn around a series of implicit questions: Why does a discussion of multitude necessitate a discussion of art? Is revolution (in art or in politics) still possible in the contemporary world, thoroughly subsumed under the capitalist mode of production? What kind of materialism can account for the genesis of the powerful, ineffable beauty of compelling artworks?

In one sense, this is a text about penetrating ontological questions. In the first seven letters, Negri meditates on the necessity of confronting the void to avoid the ubiquitous political impotence and cultural stagnation of the late eighties; in so doing, he posits ontology and politics as intimately intertwined. The possibility of revolutionary praxis requires as a precondition direct and truthful confrontation with the void, in the ability “to accept the abstractness of the world, to endure its coldness, the desert of its passions; and there on this empty horizon on which we move, rendered blind by our misery, to seek – to seek the real, always, until it falls into our hands: an encounter, an event” (10). Negri returns to Spinoza to articulate a concept of being with the dynamism to sustain such a desperate, voracious seeking, one saturated with desire, movement, flux, in short, a concept of being as immanent, as lacking any transcendent justification or any decisive meaning. Negri locates this concept of being in the multitude. Against this backdrop, the immanence of being multitude, a discussion of art and politics become necessary.

Art and politics emerge as two modes of engagement with the void, sets of practices which galvanize collective labor toward the event. Art and politics remain separate, but are traceable to a common genesis and a common subject: the multitude. It is the multitude, and not individuals, who produces the artistic and the political. From this perspective, Negri refashions the concepts of the beautiful and the sublime as immanent, as constituted by labor. Every instance in which the dynamic, plastic creative force of labor becomes concrete is a sublime and beautiful event – it is a work of art. The beautiful and the sublime are not transcendent concepts; they are not the products of divine inspiration or an opaque logic; they stem instead from the concrete force of labor, work, and practice. In this vision of multitude, “art is not the product of the angel, but the affirmation – and each time rediscovery – that all people are angels” (47). Likewise, politics becomes re-energized, differentiated from the vast plane of abstraction capital imposes. In such a schema, one can begin to re-imagine a politics open once more to the possibility of the event. This alternative logic is what Negri calls in one instance a “creative materialism” and in another a “very concrete utopia”.

But in another sense, this text is a treatise on the revolutionary imagination, on the pressing question: is revolution still thinkable? After the failure of May 68, can we dream a new left, a new arsenal of political strategies, a different understanding of revolution itself? Imagination, the manifestation of the potenza (power, possibility) is “a kind of subtle and concrete reason which traverses the void and the fear, the infinite mathematical series of the function of the market, to bring about an event of rupture” (23). In sketching an immanent ontology of collective labor, and moreover in turning to art, Negri attempts to think the possibility of revolutionary practice in the impotent age of the postmodern. As such, it is not a book of strategems, or indeed, of many answers. At certain points, Negri himself seems unsure if revolutionary action can ever be revived, if any radical project can ever be redeemed.

This question becomes the central focus of many letters. As Negri repeatedly laments, the moment of real subsumption under capital means precisely that there is no ‘outside’ of the system, no refuge from which to contest its logic or its oppression. Any revolutionary practice will have to radicalize from the inside. This conviction leaves us with more questions than answers. How can art present liberation when the practice and industry of artistic production itself operates inside the same system of domination and oppression it seeks to unseat? In other words, exactly how ‘concrete’ is Negri’s utopic vision?

The addition of the eighth and ninth letters seems directed at precisely these concerns. Written years after the first seven letters, these reflect explicitly and quite critically on the nascent project of the concrete utopia and the possibility of a new revolutionary imagination. In the closing letters, the reader encounters both limitations and further developments of the beginnings of the book.

The eighth letter concentrates on the body as the site of potenza. While the concept of the body remains fairly absent from the first seven letters, Negri rejects the concept of the body they implicitly articulate. The body not only produces, but it is the machine in which production happens. He chastises those who strive for an aesthetics – he seems to have his younger self in mind – instead of a poetics, or the beauty of powerful bodies. Playing on the Greek concept of poiesis (production, creation, formation), he suggests that the work of art itself may be less important than the artistry of bodies seizing their potenza and manifesting their irreducible strength in the creation of a new sublime. The ninth letter announces a similar shift in Negri’s thinking on the role of art in revolution. Recalling an argument with Jean-Luc Nancy, Negri realizes that the definition of beauty as excedence of collective labor requires some creation ex nihilo, an ontological problem he does not know how to solve.

But what is most striking in ninth letter is the air of pessimism, the bitterness with which Negri reflects on art and on his own writings about art. He does not renounce the contents of the previous letters; in fact, he sounds at points even more resolute. But Negri does announce a certain failure or danger contained therein. He vocalizes a need to revaluate and reform completely the concept of creation which undergirds his notions of art, practice, multitude, politics, and ontology. Despite such misgivings, though, the letter concludes with a hope, a wish, an instinct, an imperative that creation be reformed, reworked, reconceptualized.

The intimacy of the letter foregrounds the mix of philosophical commitment and biography which implicitly influences every work of theory. The reader can never forget that the letters address friends instead of an impersonal academic audience. Negri refers to his friends as ‘my dear’ and ‘my brother,’ injecting into the narrative flow an intimacy and a warmth. Lamentations and lofty projections intertwine with reflections on his own political activity. The intimacy and openness of the letter brings the reader closer to Negri and disrupts the convention of explicit linear argumentation. Indeed, one could read the decision to publish such a volume as an implicit critique of the limits of traditional academic style. The reader is not invited to understand and argument so much as a perspective, a mode of thinking and speaking. It is an entirely different exercise altogether.

In the end, the structure of such an exercise might leave us with more questions than answers; for Negri presents answers to absent questions, replies to missing challenges, and very well might have overlooked or ignored any number of important responses by his friends. His focus on his own struggles might actually have left him deaf to the voices of others. The omission of these texts forms a palpable absence. The first sentence of the first letter reads “No, I really don’t agree.” What seems to have been a collective philosophical work, grown out of correspondence, challenges, and questions, seems reproduced here as the development of one man’s thought.

As novel as the form of the letter may be, the omissions seem to reproduce a gulf between collective labor and the artist – the very chasm which Negri advocates closing. If here, form were to mimic content, we would have a volume of letters signed by Gianmarco, Carlo, Giorgio, Manfredo, Massimo, Nanni, Silvano, Raul, and Marie-Magdalene – and none signed Antonio.