Marx & Philosophy Review of BooksReviews‘Eurocentrism: Modernity, Religion, and Democracy. A Critique of Eurocentrism and Culturalism’ reviewed by Joshua Moufawad-Paul 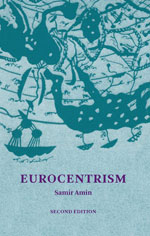 Samir Amin
Eurocentrism: Modernity, Religion, and Democracy. A Critique of Eurocentrism and Culturalism

Due to the influence of Edward Said’s Orientalism, and the subsequent rise of postcolonial theory, Marxist analyses of culture were often dismissed a priori as eurocentric and totalizing. Karl Marx, the narrative went, was a consummate European chauvinist who cared little for the struggles of non-European peoples; the Marxist tradition was further flawed because it proposed a homogeneous European discourse. Thus, the original publication of Samir Amin’s Eurocentrism in 1988 was a much needed historical materialist rejoinder to post-structuralist and postcolonial critiques.

Thankfully, Eurocentrism did not focus on an exchange of polemics with postcolonial theory. Aside from a few qualifications, Amin was more interested in theorizing a historical materialist concept of eurocentrism than airing his complaints about postcolonial anti-Marxism. Moreover, instead of simply dismissing the critiques of Said and other postcolonialists, the first edition of Eurocentrism’s strength lay in its ability to take these critiques seriously and transform them with a concrete and properly historical understanding of Europe and the eurocentric. Said’s Orientalism was not rejected out of hand (as Said did with Marx) but was treated as an important and informative text. Moreover, Amin not only demonstrated that he was in agreement with some of the postcolonial criticisms of Marxism, but was able to explain how historical materialism itself could provide even stronger critiques of the eurocentrism within its own tradition.

Unfortunately, the first edition of Eurocentrism was limited by its abbreviated size, organization, and the cavalier manner in which Amin used theoretical categories he had established elsewhere. In fact, I used to think of Eurocentrism as another section of Amin’s Class and Nation (Amin 1980) since, in order to properly understand its utilization of the concepts ‘tributary mode of production’ or ‘modernity,’ one needed to be familiar with Class and Nation. Although such a problem did not ruin Amin’s theorization of eurocentrism (and perhaps even demonstrated an important unity in Amin’s thought), it did render parts of the book somewhat opaque. The fact that the first edition did not possess an index, though more of a technical quibble, also made it difficult to locate passages in later readings. The second edition of Eurocentrism, expanded with a proper index, overcomes many of these obstacles.

The strength of Amin’s theory of eurocentrism lies in his ability to demonstrate that ‘Europe’ is a culturalist construction that masquerades as universal. That is, rather than presupposing that the binary of West/East––or Europe and its Other––existed in the pre-modern world, he argues that European civilization is an ideology that developed after 1492, the epoch of modern colonialism. Since the nation-states of the European continent were the colonial masters, eventually they began to conceive of themselves as a superior and united civilization. Eurocentric thought emerged when scholars in this continent began to mine the past and construct precedents for their supposedly superior civilization. This led to the invention of ‘an eternal West, unique since its moment of origin. This arbitrary and mythic construct had as its counterpart an equally artificial construction of the Other (the Orient), likewise constructed on mythic foundations’ (165).

Here Amin breaks from Edward Said’s analysis in Orientalism, arguing that Said’s theory, despite its importance, ‘has the fault of not going far enough in certain respects, and… too far in others’ (175). On one hand Said denounces eurocentrism without accounting for certain historical facts that led to the emergence of ‘Europe’ as a construct. On the other hand, Said appears to accept the eurocentric division of the world by proposing that the binary of Occident/Orient existed before European culture was constructed. In Orientalism, Said argues that the ancient Greeks possessed a eurocentric chauvinism in the way they read the ancient Persians. Amin is quick to point out that the Persians possessed just as many prejudices as the Greeks and that this type of prejudice was nothing more than ‘a case of banal provincialism’ (154). Moreover, since there was nothing called Europe, or an understanding of the Occident and Oriental, in the ancient world, one cannot account for the modern prejudice of eurocentrism prior to the era of modern colonialism.

Amin further bolsters his position by examining the historical development of European capitalism and the Enlightnment break from metaphysics. Although he remains a staunch advocate for modernity, he points out that capitalist modernity is flawed by European culturalism. Rather than seeing modernity (the understanding that humans rather than supernatural forces make history) as a world project, the eurocentric position holds that European culture is the universal grounds for modernity. In fact, eurocentrism is a cultural particularism that masquerades as universal. Once again, Amin sets himself against the postcolonial position by rejecting the idea that universal values are exclusionary and violent. Rather, he asserts that the culturalisms that masquerade as universal are exclusionary in that they promote difference. The solution is to pursue a universal project free from European particularism, a ‘modernity critical of modernity’ (17).

Therefore, the progressive response to eurocentrism should not be based on a flight back into cultural difference, where one embraces particular ethnic identities and metaphysical notions of the world, but the pursuit of a modern project premised on universal values freed from the eurocentric vision of the world. The strength of this argument rests on Amin’s historical exposition of how European capitalism developed against the backdrop of other non-European cultures that, at that period of time, formed different centres of human civilization. Thus, although the values of modernity would eventually emerge in a European context, intrinsically connected to the birth of capitalism, the seeds of these values were evident elsewhere. The eurocentric annexation of the world, however, created the culturalist myth that modernity was a product of some Platonic European essence.

In these days, when it is still somewhat fashionable to dismiss the Enlightenment and modernity as eurocentric, the re-released and expanded Eurocentrism is very important. The fact that Amin begins this version of Eurocentrism with a discussion of modernity significantly restructures the text, providing the necessary background to his understanding of universalism. Moreover, this addition to the beginning of his book is not simply tacked on: the nuanced discussion of modernity lurked throughout the original text and thus required a conceptual preface. Also, this discussion of modernity is concluded with a final section that was not in the original English text: ‘Towards a Non-Eurocentric View of History and a Non-Eurocentric Social Theory.’ Here Amin has reworked his analysis of Political Islam within his overall framework, thus obliterating many of the spurious criticisms that, lacking any context of Amin’s general position, simplistically dismissed his critique of Political Islam as Islamophobic.

This edition also explicates his theory of the tributary mode of production, thus providing the reader the necessary background, as well as connecting to his concerns from Accumulation on a World Scale (Amin 1974) and Unequal Development (Amin 1976). Amin even draws on his more recent theoretical contributions––for example, his theory of “actually existing capitalism.” Finally, unlike the first edition, this version of Eurocentrism strongly and obviously embeds itself within the Marxist tradition, defending the reasons for an historical materialist approach (but one that is not eurocentric) in the first section.

Although I believe that the second edition of Eurocentrism overcomes the weaknesses of the first, my main problem is that many of the updates have been lifted and retooled from Class and Nation. For instance, Amin’s discussion of alienation in the first part of the fourth section of Eurocentrism reads almost word for word from a passage in the introduction to Class and Nation. Obviously this problem is not a significant flaw, but it does indicate a larger concern: I think that some of the expansion choices might be tangental to the overall thesis of Eurocentrism. The decision to import some of his older theories of unequal exchange further demonstrate this flaw. I am not saying that these concerns do not connect to Eurocentrism but that the revised text would be stronger without them. Indeed, I would be much happier if both Eurocentrism and Class and Nation were updated together and released as companion pieces with minimal redundancy.

Still, despite these qualifications, I am pleased that there is a second edition of Eurocentrism and that the expansions were not simply designed for a cash grab. I am also pleased that Samir Amin, after all this time, is still committed to a radical socialist project. Hopefully this version of Eurocentrism will be used in university courses as both a companion piece and an answer to postcolonial theory.