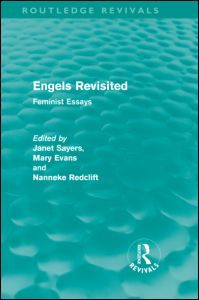 Forming part of the Routledge Revivals programme, this book, originally published in 1987 to commemorate the centenary of Engels’ The Origin of the Family, Private Property and the State, has been reissued in 2009. As such, it gives us an insight into the lasting importance of Engels’ influential work on ‘the woman question’ on the one hand, while providing us with the complex and sophisticated late 1980s feminist analyses of said work, on the other. The articles in this edited volume attest to the nuanced and often critical readings of The Origin by feminists, who, equipped with conceptual tools developed to explain the distinctly gendered oppression experienced by women, identify several shortcomings in Engels’ important, but contentious exposition of the origins of women’s subjugation.

For instance, several articles point out that the anthropological research used by Engels in his account of the concomitant rise of private wealth accumulation and what he deems women’s enslavement by men, has been shown to be inaccurate (see Redclift’s ‘Rights in Women: Kinship, Culture and Materialism’ and Mocanachie’s ‘Engels, Sexual Division, and the Family’). Assumptions regarding the historical development of the family, and the sexual division of labour between women and men, are critiqued and Engels is shown to have oversimplified complex phenomena, and to have universalised structures and processes which are best treated within their specific contexts. Hence, Engels evinces a narrow ‘unilinear evolutionism’ (Maconachie, 102) in his tracing of the singular family from its uncivilised to its modern, monogamous form; and he fails to recognise his own androcentric and homophobic preconceptions about sexuality and gendered labour (Redclift and Evans’ ‘Engels: Materialism and Morality’).

Although Engels distinguishes between social production and reproduction, the latter is ultimately subsumed in the former as women’s liberation is said to go hand in hand with economic liberation (Evans, 82). Voicing this most pressing socialist feminist concern regarding the reduction of gendered oppression to economic oppression, Gimenez nonetheless highlights the importance of Engels’ recognition of ‘the twofold character of production’ (‘Marxist and Non-Marxist Elements in Engels’ Views’, 53), which constitutes a substantial resource for feminists wishing to theorise the intersection of class and gender structures. The linkages between social production and reproduction are explored by Gimenez and Humphries (‘The Origin of the Family: Born out of Scarcity not Wealth’), but Engels’ ultimate inability to give equal importance to reproduction, when coupled with his interpretation of the naturalness of the sexual division of labour, leaves, for Maconachie, intact the implicit assumption that domestic work will still be undertaken by women under socialism (102-108).

Indeed, as Evan’s points out, evidence from state socialist societies indicates that the inclusion of women in social production requires ‘an accompanying change in ideology of gender’ (82) which is often lacking, or as Delia Davin outlines in her analysis of family policy in China (‘Engels and the Making of Chinese Family Policy’), lost to a conservative backlash. Here too, though, a thorough-going understanding of the ‘ideology of gender’ may have been missing from the beginning, perhaps owing to Engels’ own theoretical limitations, a shortcoming Sayers (‘For Engels: Psychoanalytic Perspectives’) seeks to remedy with the help of psychoanalytic work. Assessing several feminist theorists (Rich, Horney, Dinnerstein, Klein, Chodorow, Mitchell) and their capacity to elucidate the replication of class and gender oppression through the generations, she notes the similarities between Freud and Engels and treats these as complementary, each drawing attention to the contradictions in families, and the changes necessitated thereby (70-76).

Nonetheless, ‘the family’ remains contentious in several articles in this volume, especially in view of Engels’ distinction between the bourgeois and the working class family, and the role ‘individual sex love’ plays therein. For Engels, property distorts our capacity to engage in free, passionate relationships and it is only with the realisation of socialism that ‘individual sex love’ can be brought about. The proletarian family, however, lacking in the constraints imposed by property, already enjoys this privilege, and this, understood in light of working class women’s roles as breadwinners, bestows upon proletarian women an equality premised upon their participation in social production. Hence, what Maconachi calls Engels’ ‘more romantic vision of working-class relationships’ (110, see also Redclift, 115) feeds into the aforementioned reduction of women’s liberation to economic liberation. However, as she points out, Engels’ view of the freer, proletarian woman presupposes that ‘women enter social production on the same footing as men do, and attain equal status and pay’ (ibid.). This, however has not been the case in capitalist, nor in state socialist systems, where women have predominantly continued to hold inferior positions, while being largely absent from structures of power (Evans, 83, Davin, 156).

Interestingly, Davin highlights the influence of Engels’ theorising on socio-sexual relations in China, where radical policies had far-reaching effects in terms of ‘polygamy, concubinage, child betrothal, and the worst forms of forced marriage’ (156). A true enabling of ‘individual sex love’ as envisaged by Engels was soon undercut, however, as unconditional divorce was met with violent reactions (154). Women’s acquisition of land through agrarian reform encountered similar responses (ibid.), and the growing conservatism of Chinese family policy was evinced by a supplementation of the professed aim to abolish the family as an economic unit with a desire for it to be preserved, albeit in altered form (155-156). Davin notes that despite collectivisation, the family retained many former aspects of its functioning in socio-economic terms, and since this operated largely through the male head of the household, women remained at a disadvantage (156).

As can be seen from the brief overview proffered above, the range of topics covered in this collection is impressive. Several wide-ranging themes, such as production/reproduction, the family, sexual relationships, the division of labour, and Engels’ historical materialism, are explored within an inter-disciplinary setting, which certainly contributes to the versatility and appeal of this book (contributors draw upon anthropology, political science, psychology, sociology and economics). Each chapter provides an in-depth discussion on Engels’ theoretical failings or successes, as the case may be, often utilising empirical evidence from state socialist countries. While presenting a critical engagement with Engels’ work, the authors nonetheless remain balanced in their appraisals, and indeed, many aspects of The Origin are lauded for their conduciveness to a feminist understanding of the intersections of class and gender. Hence, Humphries finds that ‘The Origin does contain the germ of a feminist methodology’ (12), while Gimanez maintains that Engels ‘forces us to think…historically and politically about the question of sexual inequality’ (53). Similarly, Sayers notes Engels’ depiction of the ‘mutability of the family’ (57) as an important contribution for feminists, and Davin asserts that ‘Engel’s legacy’ in China ‘at least helped to put women’s emancipation on the agenda of one of the most far-reaching revolutions in history’ (161). The merits of Engels’ work are thereby posited in conjunction with its limitations, providing for a rich and detailed feminist reading of The Origin. In sum, Engels Revisited constitutes a valuable resource both for the study of Engels’ original work, and for an increased understanding of the role it has played in the development of feminist thought more generally. With the reissue of this book, students and scholars interested in Engels and/or feminism will fortunately be able to avail themselves of the insights found in these chapters for many years to come.