Marx & Philosophy Review of BooksReviews‘New Lefts: The Making of a Radical Tradition’ by Terence Renaud reviewed by J D Evans 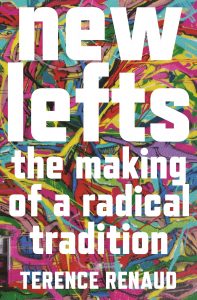 Terence Renaud
New Lefts: The Making of a Radical Tradition

J. D. Evans teaches at New York University in DC. He is working on a book about the theoretical …

Terence Renaud’s New Lefts is an ambitious book that involves a great many fields of study. Renaud explicitly raises four. First, he argues that historians of the European left should pay more attention to small, extra-parliamentary groups, rather than focusing so much on the mass electoral politics of Social Democracy. He shows that his case study, the small German group New Beginning, was an important part of the development of New Left politics. Second, Renaud’s book is especially relevant to German intellectual history, which, he suggests, has failed to see the continuity between pre-war and post-war political thinking. Third, he argues that Western Marxism was never as bogged down in despair as major histories by Martin Jay or Enzo Traverso suggest, and that turning attention to groups like New Beginning prove this point. Finally, he offers a broad claim about the left’s obsession with questions of organization and spontaneity – which he calls ‘the neoleftist dilemma’ (5) – and, again, shows how that obsession played out in the case of New Beginning.

Renaud’s archival work on New Beginning is especially fascinating, since it is linked to many well-known Germans, from the sociologist Reinhard Bendix to the chancellor Willy Brandt. New Beginning’s origin was a group of Marxist intellectuals in the 1930s, who considered themselves a sort of intellectual vanguard and took the too-good-to-be-true name ‘The Org’. Despite their vanguardism, The Org was not an imitation of the Bolsheviks. Rather, they aimed to infiltrate and co-opt existing leftist parties in the interests of a unified German left. They wanted to reform the existing left parties in the interests of the revolution, but secretly. This meant that, as well as being menaced by the Nazi state, The Org had to remain hidden even from fellow leftists. Because of the danger inherent in their conspiratorial politics, Org members became obsessed with every facet of their own lives, in a way that clearly anticipated later New Left attention to everyday life.

This clandestine group did not last long, however. By 1934, the Org leadership decided that a mass anti-fascist uprising was improbable, and suggested that Org members emigrate. The bulk of the membership rejected this advice, and formed a new group that rejected not only the idea of self-liquidation, but also the bureaucratization and elitism of the Org leadership. This new group, New Beginning (Neu beginnen!, i.e. ‘Begin Anew!’), was committed to ‘prefigurative politics: the movement’s organizational form had to align with its radically democratic goal’ (80). Just as Org members had anticipated New Left critiques of everyday life, here New Beginning members anticipated New Left critiques of the post-war era’s bureaucratized, insufficiently democratic, mass parties.

This is Renaud’s first example of what he calls the neoleftist dilemma. Members of neo-leftist groups value spontaneity, democracy and independence over organization, hierarchy and order. But, as many social theorists pointed out (Weber most famously), groups can only function with some degree of organization. Left groups that want to embody their own ideals, then, can find themselves in a cycle of creative generation, organizational consolidation and fracturing or collapse brought on by the desire for a return (or just a turn) to spontaneity. For Renaud, groups like New Beginning manifest something like ‘creative destruction,’ which is at least as productive as it is destructive.

One of the book’s refreshing features is Renaud’s constant attempts to find creativity in the development of leftist political organizing, instead of despair. So, rather than focus on the crushing of leftist alternatives by Soviet power, his chapter on the Spanish civil war asks, ‘Which modes of left organization did the fascist crisis make possible?’ The purge of non-Soviet leftists during the war, and the collapse of the Republic, led many antifascist and nonparty leftists into exile, where they formed a kind of diaspora. Their criticisms of fascism and of the Soviets laid the groundwork for the new lefts of the fifties and sixties – but they also fell victim to the pattern of consolidation. Renaud shows us New Beginning members writing antifascist memos for Allen Dulles (133), or dissolving into the mass party politics of the post-war era.

A few of them, however, offered inspiration for later New Left criticisms of the post-war order. New Beginning members Ossip Flechtheim and Wolfgang Abendroth (the latter is best known as Habermas’ postdoctoral advisor) developed critical theories of West German politics and society, including the SPD’s ‘modernizing’ faction, which had ‘renounced the working class and welcomed a free-market economy’ (224). Growing tensions between the modernizers and the left socialist SPD members came to a head in the early 1960s, when the latter were effectively expelled. This echoed the crushing of the non-Soviet left in the Spanish civil war, since it was both a consolidation of the bureaucracy and a spark for creative destruction by those more interested in spontaneity.

The final break between the more critical leftists and the institutionalized SPD came in 1966. The SPD formed a ‘Grand Coalition’ with the Christian Democrats and agreed to pass a constitutional amendment instituting emergency laws. This was a condition for West Germany to regain full sovereignty from the post-war Allied Control Council, but also reminded many leftists of Nazi-era laws. To oppose the SPD, those who rejected the coalition created the Extraparliamentary Opposition, which functioned outside of the party system, and constantly experimented with organizational forms in an attempt to avoid the seemingly inevitable ‘party sclerosis’ (247).

So, the New Left of the later sixties in Germany, France and elsewhere took over the criticisms of bureaucracy and organization that had been made by New Beginning members from the thirties through to the sixties, and used them as weapons against parties now heavily influenced by New Beginning members who had ‘converted’ (to use Renaud’s term) to institutional politics. The cycle of organization and critique may have reached a new height in 1968, but its origins lay in the anti-fascist let of the 1930s.

Renaud seems optimistic about the ways this pattern functions today. Neoleftism, he suggests, differs from other ideologies because it is determined by ‘organizational form’ (281). The fascination with organization is due to the insistence that neoleft groups must prefigure their goals: a democratic society can only be created through democratic means. This is certainly a feature of contemporary leftism in the English-speaking world (and elsewhere). For example, although Renaud considers some leftisms in the United States as more like ‘conventional democratic socialism’ than ‘the anti-authoritarian radicalism of the 1960s’, he puts Black Lives Matter squarely in the prefigurative, neoleftist camp.

Renaud certainly fulfills his four aims. In showing how New Beginning members influenced the academy, later leftist politics and the later SPD, he makes it clear that historians should pay more attention to non-parliamentary, non-mass-party political organizations. It is also clear from the book that there is no good reason to split German intellectual history into the pre-1945 and post-1945 moments, although to a non-expert, this seems self-evident, given the importance of pre-war thought for post-war thought in so many fields. Similarly, the narrative of Western Marxist despair has always been somewhat unconvincing, even if it is limited to the most supposedly despairing, like Horkheimer, and Renaud’s book provides yet another example of how leftist thought and practice has been inventive and productive since fascism. Finally, New Beginning is an excellent example of the neoleftist dilemma.

The book also raises some interesting questions. Renaud is, in general, more sympathetic to the spontaneous neoleftists than to the institutionalists, and not without cause. But his clear identification of the neoleftist dilemma could also be taken in a more critical direction: one might call it a trap, rather than dilemma. He mentions the long history of left criticisms of anti-organizational thought and practice (from Lenin to Jodi Dean) without bringing it into his broader discussion. Is this tradition a part of the dynamic of neoleftism? Is it an entirely separate tradition? Closer attention to the theoretical justifications for organizational consolidation might have given even more depth to Renaud’s discussion of the dilemma, and also provided more space for a criticism of those who jump into the pole of spontaneity head first. After all, there can be little doubt about who benefits from leftist infighting over how one should demand justice – and it is not those who are suffering from injustice in the first place.

Beyond the scope of the book, it is also worth asking how unique the neoleftist dilemma is to recent leftist politics. To take only the most obvious examples, contemporary centrist liberals often go to great lengths to make sure that corporate boards, student bodies and faculty meetings are diverse – that is, that they prefigure the outcomes the boards, bodies and meetings are meant to produce. Is this due to the influence of the neoleft since the sixties? Or is it an indication that the dilemma is broader than Renaud suggests here? Or, to go much further back, there is a long tradition of religious groups creating new energies by appeal to less bureaucratized practices, then slowly becoming bureaucratized themselves. If the problems of prefigurative, anti-bureaucratic organizing are common to late medieval radical Franciscans and Black Lives Matter, it isn’t clear that this is sufficient as a theory of neoleftism. But it is certainly a necessary part of any such theory.

Finally, New Lefts falls short of its advertising, subtitle and blurb, and Renaud is probably not to blame for this. Readers looking for a general introduction to the New Left will be somewhat bewildered by the structure and density of the book; those looking for a broader academic history will doubtless be confused at the tight focus on New Beginning, which is occasionally interrupted, but often at the expense of coherence (e.g. Renaud includes enjoyable pages on Wilhelm Reich, but they are justified only by Reich’s having once mentioned New Beginning in an essay). This book should, however, help to encourage new histories and theories of the New Lefts, and of neoleftism as a political and social phenomenon.