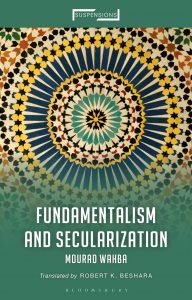 Zeyad el Nabolsy is a PhD student in Africana Studies at Cornell University. He works on African …

Mourad Wahba’s Fundamentalism and Secularization was first published in Arabic in Egypt in 1995. By the 1990s, Islamist thought had become hegemonic in Egypt, and it is this cultural context that informs Wahba’s concern with philosophy of culture as applied to the question of fundamentalism and its antagonistic relationship to secularization. As Robert Beshara notes in his interview with Wahba, which serves as a foreword to this new translation, the book was ahead of its time insofar as it was published before the spate of publications on fundamentalism in the aftermath of the events of September 11th 2001, and it clearly predicted the coming clash of fundamentalisms which would go on to shape the first decade of the third millennium, namely, the clash between right-wing Christian fundamentalism in the U.S. on the one hand, and expressions of Islamic fundamentalism on the other. Wahba also rejects the framing of the conflict as a conflict of civilizations. For Wahba, there is in fact strictly speaking only one human civilization and many cultures (x). Wahba defines civilization as ‘a tiered singularity, the course of which goes from mythical thinking to rational thinking’ (32). It seems here that Wahba, in attempting to undermine the thesis of the clash of civilizations, ends up reintroducing an evolutionist account of a singular human civilization, akin to those endorsed by Victorian British anthropologists of the nineteenth century.

The first chapter deals with fundamentalism both historically and conceptually. On the conceptual level, Wahba argues that we can understand fundamentalism as essentially driven by the human propensity for unity, which for Wahba is essentially a yearning for the Absolute (7). According to Wahba, this is how humans attempt to overcome their alienation from the world. However, the problem is that absolutes seem to multiply as a function of time, and we do not have context-independent criteria which would allow us to decide between competing claims for opposing absolutes. For Wahba, the solution is to simply give up on the search for absolutes and to endorse a kind of relativism. However, it is important to recognize that for Wahba relativism does not imply that ‘anything goes.’ Wahba thinks of relativism in negative terms, i.e. simply as the rejection of the thesis that knowledge claims can ever be of an absolute, context-independent nature. What is especially interesting is that Wahba presents himself as a proponent of the Enlightenment qua universal project. However, unlike many participants in the contemporary ‘culture wars’ of the U.S., he seems to think that commitment to the Enlightenment project with its attendant secularization entails a commitment to the rejection of absolutism in epistemology. The commitment to relativism as defined above is presented by him as a requirement of enlightened rationality and not as a product of its rejection.

For Wahba, fundamentalism confounds ‘the Absolute with the relative and the eternal Truth with the transient truth’ (37). Secularization, by contrast, qua world historical process, involves coming to think of ‘what is relative in relative terms and not in absolute terms’ (32). Since for Wahba all human phenomena are relative, this requires that we think about them in relative terms. However, this raises the question of whether relativism in this sense is consistent with Wahba’s evolutionist philosophy of history. It seems that for Wahba human history ought to develop in such a manner so that one civilization characterized by the endorsement of epistemic relativism would come to be predominant, even if expressed in different cultures. It is not clear that this philosophy of history is compatible with Wahba’s endorsement of anti-absolutism. Rather, it seems that Wahba has not negated the search for the Absolute so much as he has temporalized and historicized it, and to this extent there is a Hegelian moment in his thought. Here Beshara is correct insofar as he thinks that Wahba has to abandon his evolutionism if he is to be consistent with his own anti-absolutism.

In chapter two, Wahba provides his historical and conceptual account of secularization. He sees the modern scientific revolution as a pivotal event for the process of secularization (47), especially Galileo’s insistence that science and religion were totally different enterprises, with different methods of investigation. Galileo leveraged this difference to argue for the importance of the autonomy of science. For Wahba, this essentially means that appeals to the absolute were prohibited in the discourse of natural science and/or natural philosophy. For him, secularization is essentially a historical process whereby humans come to accept that they must think in relative terms in relation to that which is relative (56), and gradually come to extend the concept ‘relative things’ such that more and more is subsumed under it. He thus interprets the modern scientific revolution as a step towards the embrace of relativism. Here relativism becomes the telos of modern science.

In his analysis of the emergence of fundamentalism in Egypt, Wahba employs a historical materialist approach and attempts to demonstrate the way in which the rise of what he calls ‘parasitic capitalism’ in Egypt in the 1970s, i.e. capitalism where profits are produced through speculation and mercantile activities without production, led to a kind of intellectual decadence and fostered the development of fundamentalism. In the third chapter, Wahba deals with the history of the struggle between fundamentalism and secularization in the Middle East. Here fundamentalism in the region is grasped as essentially a modern phenomenon: born to fill the gap that resulted from the failure of traditional institutions in the region in the face of a modern or modernizing West and the failure of indigenous modernization projects (59). It can be can said that for Wahba fundamentalism in the Middle East is essentially a pathological reflection in the superstructure of a more fundamental pathology in the base of those societies. In those societies, capitalism has not done away with archaic social relations, but rather has formally subsumed them. Yet this process of subsumption has been interrupted and what Marx called ‘real subsumption’ has not for the most part occurred. What this means is that while capital may be dominant in those social formations, it has not revolutionized productive forces and transformed social relations to the same degree of intensity as when real subsumption has taken place. Implicit in Wahba’s narrative is the thesis that colonialism, far from aiding the secularization process in the Middle East, has placed fetters upon it. Wahba notes the rise of a liberal (or proto-liberal) intellectual current in Egypt in the eighteenth, nineteenth and early twentieth centuries, exemplified by Hassan al-Attar and Rifa’a al-Tahtawi, and later by Sheikh Ali Abdel Raziq, Khalid Mohammed Khalid, and Taha Hussein (67). However, this liberal current quickly found itself outmaneuvered by Islamists who accused it of collaborating with the British colonial authority and of attacking traditional norms just when these norms were perceived to be under attack from a foreign colonizing power. In response to this pressure, the members of the liberal current gradually abandoned the project of secularization and opted for a nationalist united front (68-69).

Beshara has also translated two of Wahba’s essays, which are appended as chapters five and six, respectively discussing classical and contemporary Arabic Islamic philosophy. Chapter five provides an account of the concept of the good in classical Islamic philosophy. Here Wahba is concerned with detecting secular or proto-secularist tendencies in classical Islamic philosophy. He finds such tendencies exemplified in al-Farabi’s rejection of divine command theory (109), and in Ibn Rushd’s secularization of the concept of the good through his championing of allegorical interpretations of religious texts when they contradict the dictates of demonstrative philosophical reasoning (116). However, it seems that Wahba is equivocating here. For while Ibn Rushd does indeed defend some kind of autonomy for philosophy, but not complete autonomy, it is also not at all clear that he was a relativist. Recall Wahba’s definition of secularization in terms of relativism. Indeed, the idea that philosophy is capable of demonstrative certainty, at least in relation to some realms of knowledge, is a key feature of Ibn Rushd’s thought. Hence, when Ibn Rushd compares the reasoning of the jurist with the reasoning of the philosopher, he writes: ‘the jurist has only a syllogism based on supposition, whereas the one who is cognizant has a syllogism based on certainty’ (Averroës [Ibn Rushd] 2008: 9). Moreover, Wahba seems to discount Ibn Rushd’s elitism. For while Ibn Rushd allowed for interpretation, this was only allowable for those who are proficient in demonstrative reasoning: ‘for anyone not adept in science, it is obligatory to take them [descriptions of the next life] in their apparent sense; for him, it is unbelief to interpret them because it leads to unbelief’ (Ibid: 21). There is also a clear sense in which Ibn Rushd is not a forerunner of secularization as defined by Wahba, since the former’s argument about the harmony between philosophy and religion presupposes that the aim of philosophy is the investigation of the divine order, i.e. a way to understand the Absolute. Wahba qua relativist does not seem to think that this is the aim of philosophy.

Like many other Arab philosophers, Wahba, despite thinking of himself as a modernist, is compelled to turn to ‘classical Arabic philosophy’ [turath] to carry out his project. This gives rise to the following questions: what kind of social, economic, political and intellectual conditions render Arabic philosophical discourse unable to move away from taking the question of its relation to its tradition [turath] as its primary problematic? How are we to describe and perhaps transcend this historical impasse? While Wahba’s book does not answer these questions directly, it points towards their significance for any attempt to grasp the current dilemmas of contemporary Arabic philosophy.