Marx & Philosophy Review of BooksReviews‘There Is No Unhappy Revolution: The Communism of Destitution’ by Marcello Tarì reviewed by Chrys Papaioannou 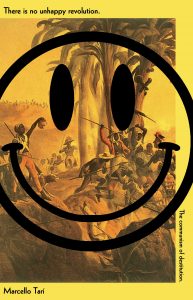 Marcello Tarì
There Is No Unhappy Revolution: The Communism of Destitution

Dr Chrys Papaioannou is a London-based critical theorist and activist, working at the intersection …

Italian intellectual Marcelo Tarì is a relatively little-known figure on the Anglophone left, both in academic and activist circles. There is No Unhappy Revolution: The Communism of Destitution, Tarì’s first book to be translated into English, is perhaps not likely to change the author’s standing, even though the publication formulates an intellectually coherent, anti-programmatic response to the perennially urgent, programmatic question: ‘What is to be done?’. Written from the standpoint of an intellectual who remains committed to the political project of insurrectionary communism, Tarì’s monograph-cum-manifesto will no doubt rouse readers who take textual pleasure in the insurgent lyricism of militant collectives such as The Invisible Committee, Tiqqun and Colectivo Situaciones. Tarì, himself the translator of The Invisible Committee’s The Coming Insurrection into Italian, might perhaps be less compelling an agitateur and more saturnine in disposition than his ultra-left French and Argentine comrades. Still, Tarì’s attentive reading of Benjaminian chronopolitics alongside his skilful attempt to build on Giorgio Agamben’s earlier sketches on destituent power [potenza], make the present volume one that deserves a wide and varied audience.

Stylistically, the book is permeated with pithy aphorisms, esoteric proclamations and mannered repetitions of rhetorical questions, which perhaps aspire to the genre of political theology more than the author would dare to admit. It is partly for this reason that it matters little that the book was originally published before the Coronavirus pandemic. (It was published in 2017 by Rome-based publisher DeriveApprodi and has also already been translated into French.) More substantively, however, Tarì’s apparent disregard for ‘topicality’ ought to be appraised with respect to his fidelity to a Benjaminian mode of historicity. As a diligent student of Benjamin, Tarì is all too aware that ‘to save tradition, we must interrupt it’, as one of his chapter titles dialectically proclaims (132). And, indeed, in places Tarì himself performs a backward-looking anachronic trope of reciting past moments as if they were already incorporated into destituent power’s lineage to-come. Tarì insists that arriving at communism by exercising destituent power [destituente potenza] cannot but entail a chronopolitical praxis. Left accelerationists as well as those who had once pinned their hopes to the constituent-turned-parliamentary power of Podemos or Syriza receive equally scathing treatment. Therefore, the necessary shift from constituent power-as-authority [potere] to destituent power-as-capacity [potenza], as originally outlined by Agamben, is further developed by Tarì through the prismatic singularity of ‘now-time’ (Jetztzeit). It is Jetztzeit as a suspension in historical time and a suspension of historical time that can offer destitution its model for a praxis of exodus.

Tarì is less concerned with affect than his book’s title implies. The 90s-rave smiley that adorns the anglophone publication’s cover, especially when noted alongside the titular reference to happiness, is rather misleading. The book attempts no analysis of the relationship – whether constitutive or destituent – between (un)happiness, revolutionary praxis and communism; and Tarì does not shy away from scornfully dismissing materialist analyses of affective labour as ‘economistic’ (207). Sex Pistols and Einstürzende Neubauten lyrics deployed as epigrams (‘Was ist ist/ was nicht ist ist möglich/ nur was nicht ist ist möglich’ [what is is/what is not is possible/only what is not is possible’]) could be misconstrued as adolescent endorsements of destructive nihilism. Yet Tarì’s allegiance to an ontology of negation lies neither with a Nietzschean transvaluation of all values nor with a Marcusean critique of affirmative culture. Agamben is here a foundational figure, as Tarì approaches the ethico-political predicament of becoming destituent (namely, the predicament of deposing-without-replacing the sovereign ruler) through the notion of inoperativity. Although phrases such as ‘the monotony of the faces and souls that pack into a McDonalds’ (117) betray a European bourgeois form of anti-capitalism that may be reminiscent of Adorno, the book does not turn to Negative Dialectics for intellectual ammunition. Correspondingly, Tarì’s reading of Benjamin is unmistakeably Agambenian. Tarì foregrounds Gershom Scholem’s Jewish theology: tiqqun as the vessel of emptying-out-while-filling is a pivotal kabbalistic image through which to conceptualise destitution. Tarì rests on Agamben’s ingenious analysis of Brechtian Gestus that has felicitously brought Benjaminian techne into dialogue with a Foucauldian framework of subjectivation. And he selects his secondary sources wisely: insurrectionary interpretations of Benjamin’s corpus remain few and far between, but Tarì tactically references Irving Wohlfarth’s tripartite essay on Benjamin and the Red Army Faction (cf. Radical Philosophy, 2008/2009), which itself builds on Agamben’s proposition to read the theses of ‘On the Concept of History’ through the a-legal epistemology of Benjamin’s notorious essay on the critique of violence.

Power-as-capacity [potenza] is the central but not the only concept that Tarì deploys when he writes of something being ‘destituent’. Benjamin’s distinction between law-preserving and law-positing violence from ‘Towards the Critique of Violence’ is followed to the letter, effectively replacing the term ‘divine violence’ with ‘destituent violence’ while keeping all the attributes of Benjamin’s notion intact. Similarly, ‘destituent strike’ is Tarì’s renaming of Benjamin’s strike beyond all strikes: it has no telos and no desire to win and take power [potestas]. So, although Tarì’s conceptualisation of ‘destituent violence’ may not quite offer an original contribution to the current discussions of (non)violence, his articulation of ‘destituent strike’ does put forward a productive account of subjectivation. Tarì directly quotes Foucault before adding: ‘The destituent strike, therefore, must pass through an inevitable desubjectification, as well as the overthrow of the authority that subjectivity places before itself. It must pass through a suspension of its own contingent identity, as well as through the destruction of the accumulation of oppression that each and every one of us suffers on a daily basis. Only this would be a correct and ‘just’ strike (113).’ According to this account, the revolutionary subject is only truly revolutionary when destituent: not only does this subject actively work against constituent potential becoming constituted power, but the subject itself self-destitutes. In the empirical example given by Tarì, this is achieved by the Zapatistas when the leader’s subjectivity is dissolved into that of the collective’s (143-144). Rather more philologically, Tarì draws on Agamben’s exegesis of the Pauline hos me (meaning ‘as if [one were] not’). Tarì rightly proclaims that there is no revolutionary subject prior to the revolutionary process. The destituent subject seizes the opportune moment, the moment of kairos, against the vanguardist obsession with the forward march of history. The destituent subject acts as if the messiah’s arrival is imminent. While revisiting ‘On the Concept of History’, Tarì sketches a portrait of the destituent subject as a militant who acts as if they were not a militant – by assuming the identity of non-identity. ‘This self-destitution of the militant simultaneously consists of: allowing for the deposition of one’s own social identity; the deactivation of the tool of ideology; and, grasping the power of that mask, of that particular mode of existing that is militancy itself’ (5).

The utopian threshold that is opened up when the speculative, ‘as if [one were] not’, is joined by the imminent ‘as if’ of a messianic temporality, is perhaps the book’s most compelling proposition. Less compelling are the author’s attempts to formulate destituent power in relation to what he calls ‘primitive’ politics (36-43). One would expect that Tarì will gesture towards Benjamin’s positive concept of barbarism from ‘Experience and Poverty’, which remains after all a paradigmatic study for a communism of destitution. Nor is it surprising that Tarì turns to the left-libertarian Deleuzian favourite Pierre Clastres to insist that destitution must take primitive forms, if it is to wage war against the state. One does not expect, however, what can only seem as a careless and flippant move to write of ‘primitive peoples’ in a manner that is lifted uncritically from 1950s French ethnographic discourse which, needless to say, is founded on modernising conceptions of history and views capitalism not as a global, but as a ‘Western’ phenomenon. There are occasional disclaimers that attempt to nuance the Western/primitive binary in operation but, in the final analysis, Tarì’s call for radicals to ‘act as a primitive anywhere that one finds Westerners’ (42) is marred in a glib anti-metropolitanism that fails to account for the inseparable social processes of capitalism, extractive and settler colonialism, and racialisation. Once this truly anti-Benjaminian way of conceiving ‘progress’ is revealed, more and more omissions come to light. In discussions of ‘self’ and ‘other’, where Fanon could have complemented Benjamin, we are encountered with the words of Levinas. Critical engagement with Achille Mbembe’s necropolitics is conspicuous in its absence. Intimations that militants ought to learn from indigenous uprisings are framed through such a fetishising and orientalising lens that one can only wonder if the communism of destitution is only available to those who already struggle from within the geopolitical walls of fortress Europe.

There is No Unhappy Revolution addresses fellow militants. It is written in defiant celebration of the ungovernable, the rioting mob, the black bloc, those who occupy, squat, blockade – those whom the state names as ‘terrorists’. It is therefore regrettable that Tarì’s ‘empirical examples’ (if they can be so called) appear so detached from the daily life of social movements. One exception is the brief engagement with the ‘No-TAV’ struggle against the construction of a high-speed railway, Treno Alta Velocità (TAV) in the Piedmont region of northern Italy, which functions as an apposite image for Tarì’s espousal of deceleration. If we are to think slow temporality against capital, as Tarì rightly advocates, and not as another manifestation of a social-democratic amelioration that takes the form of neoliberal urbanist projects such as ‘slow cities’, then what role might destitution as a praxis of everyday life play in anti-capitalist imaginaries of degrowth? And what role could this articulation of communism through destitution play in current abolitionist struggles – against the police, against carceral capitalism, against the heteropatriarchal institution of the family? Tarì may not draw such connections in his own thought and politics, but for those of us who share the author’s distrust in changing the world through state power, There is No Unhappy Revolution can unquestionably equip us with the intellectual tools necessary for further thought, and action.