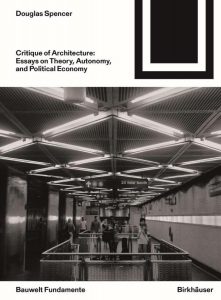 Being a ‘critique of architecture’, Douglas Spencer’s new essay collection is ‘necessarily part and parcel of the critique of capitalism’ (190) as well. This is because architecture provides exemplary material for a critique of capital’s material(-ised) ideology – a critique that sets ‘base’ and ‘superstructure’ not as two separate units unilaterally determined but as a fundamentally reciprocal relationship. As David Cunningham writes in his foreword: ‘Positioned in complex ways between the “infrastructural” and “superstructural”, and consequently mediating between them, architecture is, it may be argued, a privileged site for an interrogation of the productive operations of capital.’ (15) Understanding architecture in this way, Spencer questions not only the positivist, affirmative or immersive takes of his discipline but also its alternatives – like Fredric Jameson’s neo-Althusserian quasi-mystification of the economic sphere as something theoretically impenetrable yet allegorically catchable. Hence, with its persistent counter-hegemonic sensitivities, Spencer’s book is an excellent specimen of critical theory. With it, he is seated between the early Frankfurt School, highly complex Marxisms and critical architectural theory. Accordingly, the essays in the volume are historically finetuned to the developments of the present and its continuities with the past: from the (late) Fordist ‘production of the producer’ (203) to the neoliberal ‘politics of depoliticization’ (101).

Along these lines, each of Spencer’s texts is a determinate negation of a specific yet dominant and ideologically laden approach to architecture, capitalism and their relation. In his book, he successively deals with

The shorter essays later in the collection delve into topics ranging from Silicon Valley’s wild-wild-west-logic derived from 1968’s nomadological deterritorialisations (130-149) via the problematisation of identifying modernism with Fordist city planning (163-175) to today’s ‘non-referential architecture’ as the built meta-ideology of a supposedly post-ideological or post-historical age (176-188). Informing all these detailed architectural studies, however, is the more extensive scope of Spencer’s concern against what may be dubbed ‘post-critical post-theory’. His respective argument runs as follows: ‘Our new, post-political, and post-critical positions seem to have relieved us of the burdens of critique. But these positions have themselves to be recognized, critically, as power grabs on the practice of theory; discursive manoeuvres valorized in the currency of the current.” (80) Indeed, the neo-Nietzschean scapegoating of critique as ressentiment, envy and lack in imagination – if not as sheer parasitism – is to be found from Deleuze to Latour, and in their manifold disciples. Although this neo-Nietzscheanism propagates itself as an ‘affirmation of affirmation’ (35), Spencer does a good job in deconstructing it as a destructive (but no longer revolutionary) and negative (but no longer transcending) strategy that, in fact, totalises as much in the ivory towers of academia as capitalism totalises in the real world (Meisner 2020).

For this purpose, the volume’s first essay, ‘Architectural Deleuzism’ – dealing with the affective turn against (Marxist and Derridean) critiques of architecture – is as important as is the later essay on the parliamentarian of reification, Bruno Latour. Spencer not only asks, rightfully, ‘how any architecture which makes strategic allegiance with the market, and at the same time so vehemently disavows the practice of critique, can be “advanced” or “progressive” – other than to the extent that it advances or progresses the cause of the generalization of the market form itself.’ Even more, Spencer reminds us that the collapse of (inter-)subjectivity in and alongside the object known from ‘Actor-Network Theory’, ‘new materialism’ and ‘speculative realism’ can and must be read, under capitalist conditions, as a scholasticism of the commodity fetish. As Spencer himself puts it: ‘Seemingly radical in their extension of agency to nonhuman actors, they effectively mirror capitalism in their fetishization of the object. Supposedly progressive in their denouncement of human hubris, they align with neoliberal ideologies in refusing the human subject any agency other than that of accommodating themselves to things as they already are.’ (57) Developed in theoretically versed manner in the book’s last essay on method, such ‘deconstruction’ is of decisive importance because the post-, anti- or pre-critical trend reigns not only in architecture or art, but in the humanities and the social sciences as a whole. Indeed, the ‘flattened ontologies of Actor-Network Theory and OOO (object-oriented ontology) have to be contested as attempts to dislodge critique’ (81) not despite but because they are hegemonic even or particularly on the left. In this sense, the theoretical as much as political merit of Spencer’s Critique of Architecture is that it unfolds a counter-hegemonic critique of today’s ‘poverty of post-theory’.

In this vein, however, the only question is whether postmodernists like Michel Foucault are reliable allies to align with in this argument for theory, critique, and totality analysis. Perhaps, to sit ‘somewhere between a Marxist and a Foucauldian approach’ is not only to sit ‘uncomfortably’ (211) but to fall short of a radically anti-capitalist critical theory – which must, arguably, be anti-postmodernist as well (Zamora and Behrent 2015). Although Spencer convincingly argues that both New Materialism and OOO do not allow much critical insight due to their anti-critical framing (215), he does not sufficiently reflect on their theoretical background – which would show a family resemblance between the postmodern and the post-critical paradigm (Meisner 2021). In this sense, ‘the best way to sustain critical reflection in academia’ may not necessarily be ‘to have an openness to the thought of others’ but, rather, to remain resilient in the face of the opportunism with which academics wall themselves in inside the confines of fashionable hegemonies – not least to be, at least academically, safe from ‘individual competitiveness’ (215). Such resilience, however, should be practised not for the sake of any sectarian puritanism or careerist power struggle, but for the interrelated vulnerable forces of criticality and theorisation.

Still, Spencer’s development of a Marxian theory of capitalist totality from within architectural critique is not only laudable but strongly argued for and strictly thought through. This is not changed by the fact that for some readers, the impression may remain that not every abstraction in Spencer’s essays results from one in reality (Küpper 2021). For sure, some analyses read like slipping into analogous or intuited thought, despite the author’s own repeated lament on such practice in the writing of others. Along the same lines, it might be complained that the form of the essay is not always persevered, since Spencer’s opinion occasionally appears as if only added, missing further mediation with what has been paraphrased or quoted before and after. Yet, let us make clear that most of these problems are internal to any version of totality critique that does not hide in the consoling divisions of intellectual labour. However imperfect the results must be, to be daring enough to capture capitalism as a totality remains the crucial and central task of all critical theory worthy of its name. Since he tries to grasp, against the ‘personification of the object – the defining mark of fetishization’, ‘how the object mediates, and is mediated by, the larger totality in which it exists’ (183), Spencer is a critical theorist as the term was understood from Theodor W. Adorno to Manfredo Tafuri.

To sum up, Spencer’s Critique of Architecture criticises both the marketed, pseudo-concrete, integrative teamwork of flows and desires within networked landscapes, and the unpolitical, abstract, monastic autonomy of form as a Robinsonade – and he does so by explaining how these alleged antipodes are, effectively, just two sides of the same coin. As such, Critique of Architecture is both at the same time a critique of ideology (including ‘post-critical post-theory’) and a critique of political economy (including neoliberalism) – as much as an illustration of why the two are a dialectical one. Consequentially, after ‘a now decades-long period of assault on critical theory’ (80), Spencer’s essay collection should be mandatory for the academic left far beyond the often obscure realms of architectural theory.

*This project has received funding from the European Research Council (ERC) under the European Union’s Horizon 2020 Research and Innovation Programme (GA n. 725883 EarlyModernCosmology).