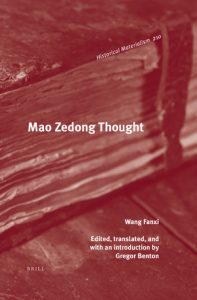 There has been a lot of interest in Maoism in recent years. A number of recent books have appeared that seriously engage with Maoism such as J Moufawad-Paul’s Continuity and Rupture and Lovell’s Maoism: A Global History. One of the more critical books to recently appear is Mao Zedong Thought by the Chinese Trotskyist Wang Fanxi, which has been translated for the first time into English by Gregor Benton. The book – first published in Chinese in 1973 – offers some brilliant critical insights into the cult of personality, the influence of Confucianism on Chinese Marxism and Mao’s role in the Chinese Revolution. This work is as much the product of Wang Fanxi as it is of Gregor Benton’s phenomenal editorial work, who has also edited a sourcebook of Chinese Trotskyist writing, Unarmed Prophets.

The introduction by Benton provides a helpful overview of Wang’s life and his relationship to the Chinese communist movement. Wang became politically active in China during the May Thirtieth Movement of 1925, which was a major anti-imperialist workers’ uprising in Shanghai. During this time, he joined the Communist Party of China (CPC) and sought to help the party’s theoretical development, which Wang thought was lacking because only a few Marxist texts were available in Chinese. Wang spent time studying in Moscow in 1927 at the Communist University of the Toilers. Benton points out that he was disappointed with it because his education was mostly military rather than political. As a result, Wang affiliated with Trotsky’s left-opposition, which he thought was better grounded in Marxist theory and had a much better understanding of the mistakes of the CPC.

Between 1925 and 1927, the dominant Stalinist faction of the Communist Party of the Soviet Union viewed the nationalist Kuomintang (KMT) as an anti-imperialist people’s movement and believed that they shared similar goals to the communists. As a result, they argued that Chinese communists should become members of the KMT and organise its left-wing. Although the communists did become influential across China, the KMT leader Chiang Kai-Shek later ordered the execution of many Chinese communist leaders and purged the party of CPC members. Trotsky argued that the CPC’s mistaken policy of subordinating its own forces to the KMT made them unprepared for the offensive against the communists by the party’s right-wing. Instead, he argued that the twenties were a revolutionary situation in China and that the CPC should have organised workers councils (soviets) in order to prepare for an insurrection. As Wang explains, Trotsky thought ‘the communists should take an independent class line, leave the Guomindang […] and wage class struggle’ (132). Along with other Chinese Trotskyists such as Chen Duxiu and Peng Shuizhi, Wang secretly organised in the CPC and sought to win the party to a revolutionary Marxist position. He was later sent by his comrades to Hong Kong so he could lead the Chinese Trotskyist movement in exile, but was deported to Macau by the British authorities in 1950. After Wang came under attack by Maoists operating in Macau, he was brought to England in 1975 with the help of Gregor Benton, Tariq Ali and Ralph Miliband. Wang wrote Mao Zedong Thought at the height of the Cultural Revolution in 1974 in order to make sense of Maoism from a Trotskyist perspective.

Wang provides a good analysis of the cult of Mao in the sixties, which he thinks was related to economic underdevelopment in China, the influence of Confucianism on Chinese Marxism and the bureaucratic deformation of the CPC. In a way similar to Trotsky’s analysis of Stalinism in the USSR, Wang argues that the personality cult was able to exert such a strong influence on the CPC because China had a low level of industrialisation and was still largely a peasant country, factors which oriented the party towards the peasantry rather than the working class. As he points out, ‘any political party […] born in such an environment can become bureaucratised and acquire a personality cult’ (63). Despite this, Mao often urged his followers to be modest, avoid arrogance and follow the ‘mass-line’. Wang notes that Mao’s modest attitude sought to ‘detoxify’ the bureaucracy by keeping his supporters humble and denouncing critical voices as immodest or sectarian. Although the personality cult may have created some initial enthusiasm for the Chinese Revolution, Mao’s deification and other such personality cults ‘destroys creativity, speeds the bureaucratisation of party and state, and is the surest way to destroy the revolution’s true leaders’ (65).

Wang notes that Mao did not receive a thorough Marxist education until 1937, during the truce between the CPC and the KMT. Although Mao had read a few Marxist texts, his main influences were Confucian writers who advocated political pragmatism, the need to honour the ruling bureaucracy (i.e. kings, emperors, state officials, etc.) and moral excellence. Wang points out that although Mao sought to fuse Confucianism with Marxism, he neither subjected it to an internal theoretical critique nor did he entirely abandon it. Although workers, students and peasants were encouraged to criticise corrupt party leaders during the Cultural Revolution, they were not able to question the Maoist faction in the CPC and its political line. Wang argues that this was due to the Confucian approach of Maoist leaders, which encouraged criticism within the framework established by the ruling bureaucracy. Wang points out that unlike Lenin or Trotsky, whose politics were guided by Marxist theory, Mao was a Confucian pragmatist who ‘acts first and thinks later’ (193). An example of this is Mao’s theory of the principle contradiction, which holds that the principle contradiction in capitalist social formation is not always that between labour and capital but changes according to the political situation. In opposition to Mao, Wang states that contradiction between the proletariat and the bourgeoisie ‘continues to occupy the main position […] to which other contradictions are subordinate’ (189).

Despite being highly critical of Mao, Wang nonetheless is able to perceive some of his strengths. He notes that although Mao lacked a grasp of the strategic questions of socialist revolution, he was an intelligent tactician who knew how to outmaneuver his enemies, exploit their vulnerabilities and maximise whatever strengths he had in a particular situation. Wang compares Mao’s ten principles of war with Sun Tzu’s thirteen principles and finds many similarities. His theory of ‘protracted people’s war’, which sought to win power through seizing power in villages in order to encircle the centres of power, was an example of a modern adaptation of Sun Tzu’s ideas. Wang notes that Chiang Kai-Shek was unable to replicate it because it assumed the unity of the army and the masses, which was not the case with Chiang who was opposed to the masses. The result of Mao’s military leadership was that the People’s Liberation Army (PLA) was able to make many advances and eventually seize power in 1949. Wang notes that one of Mao’s greatest weaknesses was his view that all ‘political power comes from the barrel of a gun’, which often resulted in reducing political questions to military ones. Although the PLA did offer political education in the villages where it was active, it tended to centralise power in the hands of a few leaders and emphasise military training over ideological consolidation.

Wang notes that the means used to achieve a socialist revolution will have an effect on the future socialist society. Since the CPC tended to equate war with revolution, it developed strong centralist tendencies that relied on undemocratic methods of handling contradictions and sometimes unpopular measures such as rapid collectivisation. Furthermore, Wang thinks that the CPC’s reliance on the peasants in the countryside rather than the urban working class alienated the party from its class base. Between 1927 and 1949, Mao and his comrades were separated from the proletariat, organising almost entirely in rural villages amongst peasants. Wang points out that the long-term effects of this separation generated bureaucratic attitudes among party leaders, corruption and the continuation of Confucian ideas in the party, which all contributed to the political battles during the Cultural Revolution.

The book contains an appendix of articles, one of which is Wang’s assessment of the Cultural Revolution. Wang notes that the Maoists perceived that young people in China were discontented with socialism. Instead of publicly making a self-criticism and addressing problems in the Communist Party, Mao ‘turned to young people, and directs their discontent against his opponents, the capitalist-roaders’ (294). Wang argues that the Cultural Revolution was an attempt to ‘deflect popular discontent’ (296) by utilising students and giving them a personality cult with which to identify. As Wang was living in exile at the time of the Cultural Revolution, it is understandable that he would view it this way. However, his bitterness somewhat prevents him from seeing its positive effects. Mobo Gao, Dongping Han and Charles Bettelheim note in their works that the Cultural Revolution enabled Chinese workers to experiment with stronger forms of collective management of production, and empowered peasants to confront corrupt bureaucratic officials in the countryside. Furthermore, land reforms, rural education and improved healthcare in the countryside gave many peasants a decent standard of living for the first time in Chinese history.

Because Wang tends to only focus on the ideological elements of Mao Zedong’s thought, he is sometimes unable to perceive the progress that was made in the Mao era. Although Wang is limited by his hyperfocus on Mao’s political line, he is very perceptive to its strengths and weaknesses. Mao Zedong Thought is a must-read for anyone studying Maoism and the Chinese Revolution, and is likely to become a classic in the near future.