Marx & Philosophy Review of BooksReviews‘Spectacular Logic in Hegel and Debord: Why Everything is as it Seems’ by Eric-John Russell reviewed by Carson Welch 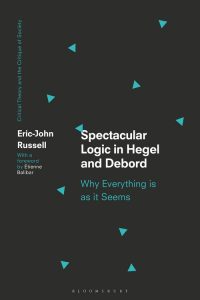 Eric-John Russell
Spectacular Logic in Hegel and Debord: Why Everything is as it Seems

Carson Welch is a PhD student in the Program in Literature at Duke University. …

The work of Guy Debord has often been associated in the English-speaking world with the ubiquity of some vague menace called “the spectacle,” which amounts to little more than an impenetrable mass of images that paper over the reality of social antagonism. A few recent studies have begun to remedy such misunderstandings of Debord’s central concept by restoring the complexity of its engagement with the Hegelian Marxist philosophical tradition. Spectacular Logic in Hegel and Debord both contributes to this restoration and offers some revisions of the studies that preceded it. But in doing so, it provides far more than a mere analysis of Hegel’s influence on Debord. Having situated Debord’s thought among a range of dialectical thinkers, Russell ultimately shows how Debord’s engagement with Hegel evinces the continuing use of the concept of “appearance” for understanding, as Russell puts it, the “phenomenality of a world that cannot be seen otherwise” (4).

At the heart of Russell’s study is the form of appearances in societies organized by political economy. What Russell means by “appearance,” as his subtitle suggests, is the way in which the world seems to subjects in a broad sense that includes the sort of conceptual immediacy associated with the term “ideology.” In Hegel’s Science of Logic, appearance more specifically denotes how the object reveals itself; there, in a complex dynamic that Russell lays out with refreshing clarity, mere illusion, Schein, unfolds into the more complex Erscheinung, the appearance whose necessity compels the phenomenal world to bear its own truth: as per Hegel’s famous phrase, which Adorno compared to the great climaxes of Beethoven’s symphonies, “essence must appear!”. The category of appearance thus spans the historically determinate meanings of “phenomenology” that each reflect in various ways on how the world ‘reveals itself’ to consciousness. But for Russell, “appearance” is more specifically the concept that renders possible Hegel’s speculative philosophy. The central gambit of Russell’s study hinges on precisely such elective affinities between “the speculative,” as a direct relation between appearance and essence, and “the spectacle,” as a historical manifestation of that relation.

This realm of appearances was likewise the starting point of Marx’s critique of political economy. In Capital, Marx begins this critique not with labor, circulation, the working day, Feudalism, or any of the other possible starting points, but rather with the commodity, the sensible and ubiquitous manifestation of the mode of production whose logic it soon reveals. As for Debord, that the first sentence of The Society of the Spectacle should play on the opening sentence of Capital indexes from the outset the intent to update this analysis of the commodity for his own time: “The whole life of those societies in which modern conditions of production prevail presents itself as an immense accumulation of spectacles” (Debord, 1995; 12). Not only does the replacement of “commodities” with “spectacles” denote a generalized commodification, but it also encapsulates Debord’s project of updating those forms of appearance that, for Marx, offer a profound view onto the dynamics of capital (if only to give way to other views as Capital progresses). The shift of emphasis from commodity to spectacle does not entail the effacement of the commodity form as a central analytic concept, but rather the commodity’s emerging tendency toward the visual. As the highest form of commodification, the “image” is one of the obvious-seeming manifestations of the spectacle in the age of ubiquitous advertising, celebrity, mind-numbing TV, and so on, but it more importantly indexes a certain encroachment of the commodity form upon the sensory apparatus. While the image is thus an important site for understanding the mutations in the commodity form, the spectacle is not identical with “images,” and its tendency toward visuality in the 20th-century ultimately “refers back to the riddle of the money-fetish” (104).

As a condensed expression of the historical transformation in the capitalist mode of appearance witnessed by Debord, this first sentence of Debord’s Society of the Spectacle also serves as a prime example of the Situationist logic (adopted from the Lettrists) of détournement—the estrangement of old content or an imposition of a new context that makes the old material suddenly give off a flash of relevance. But perhaps another détournement from Society of the Spectacle serves as a better entry into Russell’s erudite study, this time a reworking of Hegel: “In a world that really has been turned on its head, truth is a moment of falsehood” (14). The first chapter of Russell’s book is devoted to working through the development of the Hegelian aphorism from which this sentence is derived: “the true is the whole.” Taken up by Adorno, this aphorism revealed that social totality could only be comprehended at the expense of the very particulars of which it is composed, admitting of a profound reversal: “the whole is the untrue.” Russell draws clear parallels between Debord’s own engagement with this problematic and that of Adorno’s, especially insofar as both take heed of the form of appearances under late capitalism as the true expression of a corrupt world. For Russell, this is the only way to make sense of the concept of spectacle: the spectacle is not the illusion that obscures the way a society really functions; rather, it is that functioning itself. Spectacle is not an obfuscation of class struggle but one of its many facets.

Returning to Hegel’s terminology, Russell argues that many misreadings of Debord ignore this rational kernel in the mystical shell of spectacle and could be remedied by recognizing that the spectacle is not so much caught in the illusory dualism of Schein—illusion and reality, misrecognition and truth—as it is an expression of the internal necessity of Erscheinungen described above. The moments of this paradoxical identity of essence and appearance in the spectacle follow so closely those articulated in Hegel’s Logic that, for Russell, the spectacle can be considered the latter’s manifestation in reality (in much the same way that Adorno considered the culture industry a realization of the most fanciful formulations of German Idealism, industrializing the function of conceptual schematization that Kant had reserved for the individual). As Russell makes clear, this is because the concept of spectacle is not so much concerned with appearances per se as their unity or organisation in a given social formation, aligning the spectacle with the dialectical reversals in use- and exchange-value detailed by Marx. Though Russell ultimately argues that the spectacle should be considered the manifestation of Hegel’s subjective logic, such assertions in large part sidestep the usual thorny disputes as to Hegel’s relationship to the critique of capitalism, insofar as the spectacle names not capitalism in particular but a “critical theory of society” that is better understood alongside the Frankfurt School than the so-called postmodern theorists like Baudrillard. Such disputes return, however, when the contemporary spectacle is considered the self-moving and internally differentiating force that Marx called the “automatic subject” of capital and that bears such a striking formal similarity to the self-movement of Hegel’s world spirit (making it no surprise that Hegel, too, was familiar with Adam Smith’s “invisible hand of the market”).

Another such problem addressed in Russell’s book is that of “separation,” inherited by Debord from Lukács and the early Marx. Like in the studies of Tom Bunyard and Anselm Jappe on which Russell builds, Spectacular Logic gives detailed accounts of the process by which subjects are unable to recognize the products of their labor as their own when the objective social world becomes “separated” from those who have created it, acquiring the status of an inalterable “second nature.” Russell adequately traces this tradition and its problems, revising at times its treatment in recent scholarship—in particular what Russell considers Jappe’s over-emphasis on the value-form and Bunyard’s opposition of Hegel’s speculative philosophy to the real logic of spectacle. Though taking into account the influence of French Hegelians like Hyppolite and Lefebvre, Russell focuses more directly on Debord’s engagement with the German tradition from Hegel to Lukács. But it is only when Russell returns to his sustained reading of Hegel’s subjective logic and of the “Force and Understanding” section from the Phenomenology that this work most starkly stands out from its predecessors’. It is best not to spoil any of Russell’s thorough and idiosyncratic reading of Hegel’s speculative philosophy, except to point out that Spectacular Logic, as Étienne Balibar writes in the book’s foreword, “might very well become one of the best critical introductions to the reading of the Subjective Logic” (xviii).

From the book’s opening, Russell admits that he will somewhat narrowly focus on the logic of appearances in capitalist society, leaving untouched a great deal of material at the margins of this already massive scholarly undertaking. Nonetheless, since Debord’s artistic works constitute in their own right a profound meditation on the social organisation of appearances, one might have expected Russell to extend his own insights into a consideration of Debord’s artistic practice. Despite his limited output, Debord primarily considered himself a filmmaker, even as he made one of the first, but certainly not the last, proclamations of cinema’s end—not to mention the possibility for art to transcend itself in the construction of a new reality (and as for media more generally, Debord could not have more clearly stated that “the media” constitute only the most immediate and particular example of a mode of appearance that extends far beyond them).

Many of the strengths of Russell’s book, however, stem from this decision to bracket such topics within Debord’s thought. Such bracketing allows him to provide much more than a corrective to the reception of Debord in the Anglophone academy, however needed one may still be. Russell goes far beyond such correctives by providing a strong statement about why, to play on a sentence from Oscar Wilde that serves as the book’s epigraph, it is only shallow critics who do not judge by appearances.