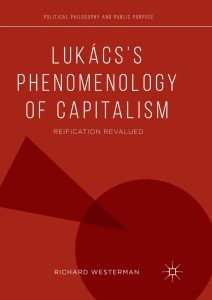 Much has been written about History and Class Consciousness (henceforth HCC); it is hard to imagine that anyone could come up with a substantially original interpretation. Richard Westerman has done so in his daring and surprising book, Lukács’s Phenomenology of Capitalism. Reification Revalued. Lucien Goldmann said that Lukács was a Kantian, who became a Hegelian, and then a Marxist. According to Westerman, Lukács in HCC was in fact a Husserlian.

Rejecting a century of interpretations of HCC, Westerman views Hegel as an influence on Lukács – but only the Hegel of the Science of Logic, not that of the Phenomenology of Spirit. Lukács proposed a phenomenology of creative and receptive attitudes toward the work of art in his Heidelberg manuscripts (1912-1918), which he wrote with a view to obtaining his ‘habilitation’ in German universities. In them, Lukács wrote: ‘In the interest of terminological clarity, and unless the contrary is explicitly stated, it must be said here once and for all that the expression ‘phenomenology’ refers to Hegel’s and not Husserl’s use of the term’ (Lukács 1974: 37, n. 10). Indeed, the unfolding of proletarian class consciousness in HCC has mostly been read as structured along the lines of Hegel’s phenomenology. Westerman, however, claims that phenomenology in the manuscripts and in HCC is in fact strictly Husserlian, not Hegelian, and that the philosophies of Edmund Husserl and Emil Lask (as well as the writings of art historians Alois Riegl and Konrad Fiedler), offer the key to understanding both the Heidelberg manuscripts and HCC – Westerman does not cite Lukács’s own statement in this regard, but mentions (55) that Agnes Heller refers to such a passage, but that she also ‘concedes’ that Lukács’s interpretation of Hegel was very ‘idiosyncratic.’ Ultimately, Westerman concludes not only that Lukács rejects the notion of identity in Hegel, but that ‘Lukács’s solution, in contrast, eschews both identity and essence’ (168). Yet, Lukács’s whole argument aims to demonstrate that the proletariat will become ‘the identical subject-object of history’ (Lukács 1971: 197).

Most readers of HCC believe that it is a work of Marxist philosophy. That is not the impression one gets from Lukács’s Phenomenology of Capitalism, which claims that Lukács ‘transfers Husserl’s account of the intentional structure of the mental acts and the phenomena of consciousness to the practical acts and phenomena of social being’ (127). The rehearsal of the Marxist sources of HCC is a well-trodden path; one can understand that Westerman should have chosen not to repeat common interpretations, but to outline a fresh one. However, he seems to be at pains to ignore the influences of Hegel and Marx on Lukács’s book (something he attempts to justify in his book’s conclusion). For example, in order to account for the relational character of Lukács’s approach, he invokes Georg Simmel. He does not see relationality here as stemming from the writings of Marx, who famously defined the human essence as the ‘ensemble of the social relations’ (Marx 1976: 3).

In general, Westerman does not display great knowledge of Marx’s theory. He seems to believe that Marx had an economistic and class-reductionist approach, a rather debatable proposition. He claims that alienation ‘is the result of a dichotomy produced by the commodity structure’ (278) between form and content. But Marx did not aim to be a theorist of commodity exchange as such; his purpose was to theorize a very specific relationship, the sale of labour power in the relationship of capitalist and wage labourer. The issue was not commodity exchange, which has existed in many modes of production, but capital.

Westerman regards as a sign of art historian Riegl’s influence the idea that ‘each type of society has a different “structure of objectivity”’ (102). One is tempted to reply: they are called modes of production (a notion that encompasses much more than economic relations). Westerman questions whether Lukács was an orthodox Marxist, arguing that Lukács’s theory of capitalism is based on reification, but does not deal with surplus value or the tendency of the rate of profit to fall – as if these were the touchstone of Marxist orthodoxy. The publication of the 1844 Manuscripts, but also of the Grundrisse and of the full version of German Ideology, revealed the extent to which HCC paralleled Marx’s thought in so many ways. Indeed, Westerman himself notes that Lukács in 1967 stressed the salience of the concept of alienation in twentieth-century thought and how HCC was centered on this problem.

Westerman constructs a straw man he repeatedly knocks down throughout his book. He accuses a variety of interpreters of Lukács of believing that the latter ‘treat[s] the relation of subject to objectivity as the interaction of two mutually external entities’ (4). No such interpretation of Lukács should be taken seriously, because it completely misunderstands his concept of reification.

For Westerman, ‘subject and object are treated [by Lukács] as structurally defined parts of a meaningful totality of consciousness’ (16). The key word here is ‘meaningful’: ‘Consciousness’ in HCC coincides with social being, writes Westerman. He writes that Lukács ‘interprets social being through a formal semantics of practices and the meaning of objects […] it is the logic of these meanings that drives social practice’ (277-278). On that view, it would seem that Lukács was an idealist after all, as critics of HCC in the Communist movement claimed!

Westerman suggests that the young Lukács oscillated between two positions: a mystical, messianic one, expressed in Soul and Form, The Theory of the Novel, and Lukács’s political writings between 1919 and 1921; and a rigorous philosophical one stated in the Heidelberg manuscripts (1912-1914, 1916-1918) and the chapters of HCC written or rewritten in 1922. Westerman attributes this to Lukács’s return in 1922 to ideas inspired by Lask, Husserl, Riegl and Fiedler. This begs the question of why his early revolutionary writings were not inspired by them. Why, in 1919, 1920 and 1921, would he ‘forget’ about the views developed in the Heidelberg manuscripts, only to rediscover them in 1922? Is there not a simpler explanation?

Ultimately, Westerman is not able to establish the unity of HCC. He proposes in his account to discard the two chapters on Rosa Luxemburg, as well as those on class consciousness, on legality and illegality, and on the changing function of historical materialism, and to focus only on the chapters ‘What Is Orthodox Marxism’, ‘Reification and the Consciousness of the Proletariat’, and ‘Towards a Methodology of the Problem of Organization’.

Westerman cites approvingly Lukács’s notorious comment that the sole criterion of Marxist orthodoxy is the adherence to the method of Marxism, rather than to this or that theory or concept, or even to all or any of Marx’s individual discoveries. It is easy to point out that Marx’s ‘method’ could surely not so easily be abstracted from his discoveries, and that any rejection of the latter would surely imply a real indictment of the former. Yet when Lukács speaks of ‘method’, he means the practice of grasping events and processes as aspects of totality, in other words in the light of the actuality of the moment of proletarian revolution.

Lukács’s Phenomenology of Capitalism is a very academic volume; it treats HCC as one might a work by Aquinas or La Mettrie, not as an eminently militant, communist book. Seeing it as principally influenced by Husserl, Lask or Riegl is also a way of making it a safe object of academic research in conservative universities. The publisher’s web site says that Lukács’s Phenomenology of Capitalism ‘offers a radical new interpretation of Georg Lukács’s History and Class Consciousness, showing for the first time [emphasis added] how the philosophical framework for his analysis of society was laid in the drafts of [his] “Heidelberg Aesthetics”’ and ‘reveals for the first time a range of unsuspected influences on his thought, such as Edmund Husserl, Emil Lask, and Alois Riegl’. This is simply untrue (and Westerman himself is much more careful in his utterances on this subject). Ernst Bloch (1923), Rosshof (1975), Rochlitz (1981, 1983) and Kavoulakos (2018) all noted or explored Lask’s influence on HCC. Agnes Heller wrote: ‘[The Heidelberg Aesthetics] constitutes the bridge between Soul and Form and History and Class Consciousness. One could even indulge in the dangerously unhermeneutical idea that there is no possible understanding of Lukács without the Heidelberg Aesthetics.’ (Heller 1989: 206) Miguelez wrote a doctoral thesis (published in 1973) supervised by Lucien Goldman, comparing Husserl and Lukács; Vajda (1978-79) compared them in a similar way. There is no doubt that Westerman goes much further than they did in reading Lukács’s work in the light of Husserl’s phenomenology. Lukács learned much from Kierkegaard, Husserl, Lask, Riegl and Fiedler; it is also evident that he was very deeply influenced by Marx, Luxemburg, Lenin, Hegel, Kant and many others.

The aim of HCC was not to propose a phenomenology of capitalism, as in the title of Westerman’s book, but to shed light on the development of proletarian class consciousness, and, on this basis, to give an account of the proletarian revolution within the context of a theory of history. Why did Lukács call his book History and Class Consciousness? Westerman’s account provides no sense of this. Because he does not believe in the relevance today of class struggle or proletarian revolution, Westerman has, often ingeniously, tried to provide a new meaning for HCC, by reinterpreting it completely as a work of Husserlian phenomenology, rather than of historical materialism. The result no longer resembles History and Class Consciousness.