Marx & Philosophy Review of BooksReviews‘Tell the Bosses We’re Coming: A New Action Plan for Workers in the Twenty-First Century’ by Shaun Richman reviewed by Augustus B Cochran, III 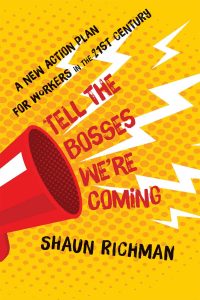 Reviewed by Augustus B Cochran, III

Augustus B. Cochran, III is professor of political science at Agnes Scott College in Atlanta. He …

In Tell the Bosses We’re Coming, Shaun Richman, Director of Labor Studies at SUNY Empire State College, draws on his decade and a half of organizing experience and labour journalism as well as his extensive knowledge of labour law and scholarship to urge the American labour movement to take the offensive, to question its conventional wisdom and to think more broadly about its organizing options. He does not dwell on the desirability of unions, accepting that premise as a given. Nor is his focus the deplorable state of the labour movement and the plight of workers in contemporary America. The obscene levels of inequality, the insecurity of precarious jobs and the deteriorating conditions of work in the United States are well-documented and their causes variously analyzed. Rather than sifting through diagnoses, the virtue of this book is its attention to prescriptions. Richman is bold enough to question the basic organizational model of American unions and to direct readers’ attention to strategic alternatives and possible solutions. While no obvious solution emerges, the survey of options that go beyond the usual tinkering should stimulate badly needed rethinking about fundamental assumptions in the labour movement.

While not concerned to diagnose the cause of workers’ problems, Richman’s analysis implicitly centers work law as the principal culprit responsible for the labour movement’s predicament. He makes a strong case that labour law, rather than balancing the power disparities between employees and employers and protecting worker rights, has instead become a ‘trap’ favoring bosses and impeding worker organization. He deftly analyzes the teeth in the trap (51-53). Most flaws he identifies are well-known: enterprise-level bargaining, a right to strike weakened by permanent replacements, management’s rights and permissive topics of bargaining that exclude key business decisions determining the quality and quantity of work, benefits constituting a private welfare system that makes unionized companies less competitive, and campaign rules that advantage employers. In criticizing exclusive representation as aiding employers more than unions, however, he attacks a major pilar of the American model of unionism. Exclusivity established through National Labor Relations Board (NLRB) elections, when combined with the legal duty to represent all workers in the bargaining unit equally regardless of union membership and the encouragement of free riders (workers receiving benefits without paying even the minimal costs of representation, so-called ‘agency fees’) in public and private (‘right to work’ laws now enacted in a majority of states) employment, now imposes more burdens than benefits, he contends. In fact, although almost everyone recognizes that the National Labor Relations Act (NLRA) is badly in need of revision, Richman controversially argues that this legal scaffolding is so fundamentally broken that it cannot be fixed but must be abandoned in favor of an entirely new approach.

In advocating forcefully for labour to break out of the trap created by labour law and orthodox organizing, Richman proves himself unafraid to skewer sacred cows and shred shibboleths held dear in labour circles. The book’s substance is matched by its style: the writing portrays the energy and impatience of an organizer, and if occasionally more depth and clarity might be desired, it conveys the intensity and urgency of the crisis facing labour. Richman’s tone is conversational, which appropriately embodies his purpose in writing: despite the title’s reference to bosses, the target audience is labour activists and progressives seeking to reinvigorate the American workers’ movement and the left more broadly. And although the title promises ‘A New Action Plan’, he does not advocate a single strategic approach. Instead, his goal is to spark a dialogue about a wide range of possible actions and reforms that labour might embrace, ranging from the mundane and commonplace to proposals unfamiliar to most non-academics and falling well outside the zone considered ‘practical’ or ‘realistic’, the constraints that place most fundamental changes beyond the limits of most American politics.

An example of ideas likely to raise hackles of union officials is minority unionism as a means of escaping the exclusive representation trap. Originally proposed by Charles Morris (2005), this tactic would encourage unions to organize and seek to bargain for those workers interested in union representation, even if members did not constitute a majority, possibly resulting in multiple minority unions in the same workplace. Even though Morris argues that the NLRA can accommodate minority unionism and that this strategy might eventually result in majority unions, this approach would probably need radical legal reinterpretations, and the course of this strategy is uncertain. Although displaying some ambivalence, recognizing the stability and resources assured by union shops and dues checkoffs, Richman endorses experimenting with this strategy.

Richman also considers several other rather fundamentally novel proposals. Without closely describing or analyzing European experiences, he suggests that some form of co-determination would meet American workers’ demand for more voice at work. Although polls prove that workers indeed want more say, the data suggest that employees might prefer non-adversarial representation, and union leaders fear that workers might be coopted into accepting works councils as substitutes for unions. Another example of ‘going back to basics’ is Richman’s willingness to challenge at will discharge as the default common law of employment. There is no doubt that lacking legal protection against unjust terminations weakens workers, but it is less clear that legislating just cause employment significantly strengthens employees vis-à-vis their employers. Experience with statutory just cause, in Montana, the only state to enact such a law, and perhaps in countries such as Brazil with legislated rather than negotiated models of labor regulation, suggests that enforcement mechanisms more than legal texts are key. A related idea is creating a private right to sue, allowing direct access to courts to enforce not only just cause statutes but other labor protections. Making labour law more similar to anti-discrimination law might allow workers to circumvent the NLRB, understaffed and underfunded as well as subject to sharp partisan swings, but individual litigation has not proved very effective in enforcing employment law.

Beyond these and other intriguing specific proposals, Richman generally endorses James Pope’s position that labour should insist that worker rights are constitutional, protected by the 13th (prohibiting slavery and ‘involuntary servitude’), 1st (protecting free speech and assembly) and 14th (guaranteeing due process and equal protection) amendments (2002). Pope argues forcefully that such a framing of labour rights corresponds to historic worker understandings and would help revitalize worker consciousness today. Richman includes as an appendix to this book his ‘Labor Bill of Rights’ that essentially operationalizes such a constitutional approach to revamping and strengthening workers’ rights. Since these ten claimed legal protections were written before Trump won the presidency and stacked the courts with libertarian judges, however, as a litigation strategy they have a sadly dated sound, although perhaps still retaining value as mobilizing demands.

Despite the boldness and freshness of Richman’s ideas, his strategies are still plagued by the chicken-egg dilemma that bedevils almost all labour strategizing: radically expanded organizing seems to depend on reformed laws, yet revamped legislation seems to depend on a more broadly organized working class. In fact, despite his willingness to break out of the bounds of orthodox thinking, Richman’s main limitation may be the need to consider even more radical alternatives, e.g. social movement unionism, mobile craft or regional citizens’ unions, a legislated rather than negotiated model of unionism (e.g. Brazil’s labour code), or the issue of a labour party.

The Biden administration has opened possibilities, or at least raised hopes and expectations. The administration’s labour platform, the Protecting the Right to Organize Act (2021), is far tamer than most of the suggestions vaunted by Richman, but goes much further than the Employee Free Choice Act, centerpiece of Obama’s labor program (although it falls far short of the very creative Clean Slate for Worker Power (2020) advocated by a group of labour academics and activists). Whether the Democratic Party, with its luke-warm alliance with labour, can push even mild reform through constitutional governing institutions that even conservatively mainstream political scientists now recognize as dysfunctional remains to be seen.

Regardless of the fate of the Pro Act, however, Richman’s great contribution to the cause of a stronger labour movement is his insistence that we dare to think deeply and widely about basic changes, not limiting our ideas to the safe and ‘practical’ tried and true approaches of the past. The urgency and importance of the task could not be clearer. Much more is at stake than economic justice and a healthy economy: it is increasingly obvious that the political left depends on a strong and organized working class, and that if left parties abandon workers, they will turn to right-wing populists. In rethinking worker organizing then, we are indirectly probing the foundations of revitalizing democracy.