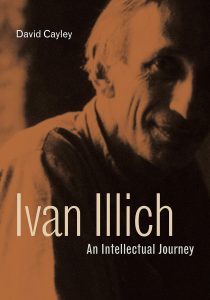 Among the public intellectuals of the New Left, Ivan Illich might have been a starkly atypical figure. His work has, however, garnered new attention in the degrowth movement and the philosophy of the commons. David Cayley’s new intellectual biography of the cultural critic will certainly be of interest to those exploring the merits of environmentalist thought. However, as Cayley notes in the introduction, how does one write the biography of an individual who doubts the mere possibility of totally understanding another human being? Illich, for instance, criticizes modern medicine for subjecting the body to total visibility. He also argues that the good life cannot be of one piece, but must be lived through surprise and friendship. There is no self-identical individual preceding or even distinct from his relations to others. According to Illich, a fulfilling life comes from faithfully surrendering to chance encounters and unexpected callings. Cayley writes Illich’s biography in the same spirit of friendship. The two men met several times, but the most important meetings were two interviews on theology at the end of Illich’s life, published as Ivan Illich in Conversation (1992) and The Rivers North of the Future (2005). From these events, Cayley recounts the story of their encounter. He settles for a non-totalizing perspective on Illich’s philosophy, painting an image of his entire oeuvre from these late interviews and Cayley’s own eclectic reading interests. In an impressive 468 pages (excluding the footnotes), Cayley struggles and thinks with Illich from a predominantly theological vantage point.

The theological lens might be surprising to those who only know Illich’s polemical texts on deschooling or medicalization, but, in fact, Illich started his career as a missionary priest among Puerto Ricans in New York and later in Latin America. However, he clashed with the Catholic Church over how willingly it operated as a vehicle for American cultural imperialism and neoliberalism in Latin America. Illich accused the Church of too readily accepting the narrative of an underdeveloped Global South in need of Western aid. In his opinion, the gospel preached human freedom, not dependency on Western benefactors. In 1968, Illich was ultimately condemned in Rome for his subversive orthodoxy. The rift between the Church and Illich never healed. Although he never renounced his faith or his position as a priest, he completely suspended the exercise of his priestly duties until his death in 2002.

The opposition to American imperialism in Latin America, however, did not make Illich into a liberation theologian like Gustavo Gutierrez or Paulo Freire. Illich’s position on the political left was more uneasy on account of his additional opposition to the modern industrial worldview, which he identified not only in American capitalism, but also in communist planned economies. Cayley shows that Illich is best characterized as a ‘commonist.’ For Illich, the commons are not just collectively held farm lands from the distant past, but a vital dimension of the human condition, which he names ‘the vernacular.’ According to Illich, human beings spontaneously produce collective use values in their everyday lives without the need for mediating institutions. Children, for instance, learn their first language not by paying a service provider to teach it, but by naturally interacting with their caregivers. One of the most important instruments for human conduct is thus not the product of any economic exchange or coordinated production process. Language and conversation give meaning to our lives, even if they are not planned to serve any predetermined function. They just happen as a gift of life. In Illich’s philosophy, there is a realm of human relationality able to sustain the good life beyond the grasp of the market or the state.

Illich laments, however, that institutions like the Church, the market, or the state have increasingly invaded the vernacular realm in order to manage and measure it. Previously gratuitous interactions, like regular conversations, thereby become ‘shadow work.’ In Marxist vocabulary, one would say that modern industrialism tends to render non-productive, ‘free’ time functional to labour-time. The conversations and human contact we have outside of work become hidden props for keeping the production process running. Marx subsequently sought to revolutionize modern industry by encouraging the proletariat to take over the means of production, but Illich, on the other hand, tries to rekindle the flame of the original, non-commodified use values. One should not overtake the industrial apparatus, but dismantle its hold on human relations. To stay with the example of language learning, Illich documents that, in premodern times, there existed no standardized languages apart from Latin and Greek. Just like children learned languages through everyday speech, adults spoke hybrids built from whatever they picked up in casual conversation with others. Language was thereby useful to individuals without explicitly serving the general mode of production. But with the invention of the printing press, these vernacular tongues became dangerous to the Church, the economy, and the state. People spent too much time reading and conversing in vernacular languages beyond centralized control. At the threshold of modernity, Illich thus claims Church and state officials invented the idea of a mother-tongue with fixed grammars and vocabularies. This allowed for standardized and efficient communication across cultures and it enabled centralized control over larger groups of people, but it also demanded that individuals adapt their spontaneous speech according to the guidelines of textbooks and dictionaries. From that moment onward, language had to be taught and popular speech was put under professional control.

The critique of professional control at the expense of spontaneous human relationality animates Illich’s most famous essays from the 1970s, like Deschooling Society (1970), Tools for Conviviality (1973) and Medical Nemesis (1975). According to Illich, modern professional institutions like schools and hospitals monopolize access to social goods like education and healthcare with counterproductive effects. Cayley rightly points out that, contrary to what a cursory reader might believe, Illich does not fundamentally oppose these institutions, but he wishes to disestablish their monopoly on social life. According to Illich, once the professional class becomes too powerful, its well-intentioned social engineering is surreptitiously subverted in a dialectical twist of fate. Mandatory formal schooling, for instance, promises the cultivation of the critical mind, but, in practice, it renders people dependent on diplomas to access social positions. Once the schooling system achieves a monopoly, the professional middle class sets the rules over who ends up where on the social ladder. For Illich, instead of delivering general emancipation, mandatory schooling stratifies the population between those able to obey the school’s (hidden) curriculum and those whose cultures set them up for failure vis-à-vis upper- and middle-class expectations. To put it bluntly, Illich believes mandatory schooling does not generate critical intellectuals, but conformists and dropouts. Class oppositions are translated into educational differences and, since one needs schools’ official accreditations to ascend on the labour market, the education system tends to legitimize inequality rather than amending it.

Still, Illich is no hopeless romantic nostalgic for the good old days of premodernity. He does not argue for a simple return to the vernacular as it once was, but calls for a reinvigorated creation and reappropriation of new commons. At this point, however, Cayley’s perspectivist interpretation of Illich shows its main weakness. Since Cayley reads Illich from the 1990s backwards, he emphasizes the later disillusioned Illich over the more optimistic Illich from the 1970s. The former is the Illich who laments that the scientific reduction of water to H2O annuls the religious symbolism of Holy Water and subsequently says that ‘by now, in 1992, I wonder if God might not have to redeem us by fire because we have done away with water’ (277). These are the kind of exaggerations that recall Baudrillard’s worst excesses. Surely the evocative religious meaning of water as a cleansing force has not suddenly evaporated once Gay-Lussac and von Humboldt deciphered the chemical composition of water in 1805. Cayley spends a lot of energy defending the late Illich’s alternative to the generalized destruction of the vernacular under the rubric of a philosophy of complementarity from Illich’s Gender (1982). In that book, Illich uses the history of the male/female-dichotomy to argue that traditional vernacular cultures relied on fixed dualistic ontologies to structure the world (male/female, sacred/profane, life/death, etc.). Both poles of these dichotomies expressed real but complementary differences, like the Chinese Ying and Yang. According to Illich, we should return to some version of this worldview. This book was, however, very controversial immediately upon release for its seeming defense of traditional gender roles and, even with Cayley’s many clarifications, Illich’s proposal is politically unconvincing. It remains unclear how this would help build a politics of new commons.

The optimistic Illich of the 1970s seems more effective. In those years, Illich still believed that not yet industrialized popular cultures and digital technologies could foster new commons. He mentions, for instance, the potential of learning webs as an alternative to formal schooling. People with similar interests could – over the computer, for example – establish study groups for independent research. Instead of rendering themselves dependent on the professional education system, they could contact teachers directly to help them with their needs. This version of Illich regarded vernacular culture not as a pristine paradise lost, but a persistent dimension of the human condition. Wherever there are people, there is spontaneous collective creativity. Professional organizations might capture the products of this human relationality, but they can never destroy the potentiality as such. When two people meet, an encounter arises that cannot be entirely predesigned. The commons are thus an inextricable part of everyday life and an ineradicable potential product of human togetherness. For those aspiring on the left to a retour à Illich, this perspective is a good place to start.