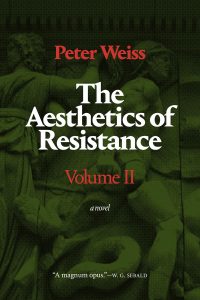 Chris Beausang was born, and continues to live, in Dublin. His first novel, Tunnel of Toads, is …

Peter Weiss’ two primary themes across all three volumes of The Aesthetics of Resistance are revolution and art. Focalised around an unnamed narrator who has self-consciously interwoven the project of his own political and intellectual development with that of the international working class, we encounter historical figures from the European communist and social-democratic left in the years leading up to the Second World War. Vladimir Lenin, Rosa Luxemburg, Bertolt Brecht appear, as well as more obscure figures such as Max Hodann, Charlotte Bischoff and Jakob Rosner, who would only occupy the background were The Aesthetics of Resistance a more conventional historical novel in which big names are represented as the sole protagonists of immense, complex and contradictory historical processes. Intimate portraits of their personal and political lives, their experiences with art, their involvement in underground agitation and anti-fascist resistance are rendered against a vast world-historical background of failure, defeat and betrayal as the social democratic parties and the popular front are in turn quashed by fascism and no upsurge of working class power successfully breaks the political deadlock in the worker’s state.

Weiss’ capacity to marshal all this material within an immensely readable text would be miraculous even if throughout the novel we did not encounter some of the most serious considerations of works from within the canon of Western art, all rendered within a prose style of great clarity, quality and political commitment held at a pitch and stretching over a duration that is unmatched in any work of fiction of which I am aware. The Aesthetics of Resistance wears its complexity and erudition lightly. Though there are no paragraph breaks within a section, each is limited to between five and twelve pages in length and each clearly differentiates its central concern from those previous. It would not be too much of a stretch to suggest that The Aesthetics of Resistance’s structure is itself dialectical; it moves in tandem, associatively and in opposition through the attempts of the liberal capitalist powers of Western Europe to fulminate war between the Third Reich and the USSR, the difficulty of conducting underground political work under constant threat of deportation and imprisonment, a defence of the works of the French novelist Eugène Sue and the history of Théodore Géricault’s painting, The Raft of the Medusa.

While the first volume featured considerations of Franz Kafka’s novel The Castle, the paintings of Bruegel and Dante’s Inferno, the second has the narrator only briefly travel to Paris to consider the architectural legacies of the Commune and art produced under the restoration of the Bourbon monarchy before these topics begin to recede, in favour of a focus on a fictional Brecht play about the Swedish nobleman Engelbrekt Engelbrektsson, who led a peasant-worker rebellion against the Danish and Swedish bourgeoisie, then taking shape in the fifteenth century. This play, which the narrator and the entourage of artists, exiles and refugees gathered around Brecht assist him in writing, by carrying out research or participating in his interrogative salons, becomes the central focal point of the second volume’s second half, with Weiss affording significant amount of attention to the narrator’s deepening understanding of the origins of mercantilism in early modern Europe, how the objective pressures of productive development and expansion begin to formalise labour practices and techniques in the nascent state’s periphery and lay the foundations for capitalism’s emergence, in the midst of, and alongside, class struggle.

With so much of this second half conducted within a salon dominated by a figure as iconic as Brecht and the lack of any set-piece which can match the urgency and tragedy of the Spanish Civil War — not to mention expertly mediating its failures and successes with a close reading of Pablo Picasso’s Guernica — there is more than a sense that Weiss’ method has undergone a change in this second volume. Up until now, Lenin and Luxemburg have been seen only in the recollections of the narrator’s father and Willi Münzenberg. Brecht as a living breathing presence would seem to violate the terms by which Weiss has been operating under until now. Such a change is best understood as Weiss’ attempt to reflect the weakness of the Swedish working class, which is represented as being far less militant than its Russian and German counterparts and with far more faith in the capacity and willingness of the institutions of the state to deliver higher living standards and better working conditions on an incremental basis over time. The inevitable co-option of Swedish social democracy into the bourgeois state is far less to do with the street skirmishes and declarations of soviets that we see in the German Revolution and far more to do with a steady accumulation of power in the parliamentary arena. Even their telegrams seem inadequate to the moment; Erik Palmstierna, too late, attempts to warn Alexander Kerensky of the danger Lenin poses to social stability in Russia and urges him to have him killed before he can arrive. Brecht, who is portrayed as vainglorious and likened on more than one occasion to an industrial capitalist growing rich off the surplus value generated by his peripatetically employed entourage, forms a contrast with Rosner, ‘The Saint Jerome of the Comintern’, who maintains robust defences of the worker’s state against those who charge it with degeneration and carries out underground work on its behalf at the risk his life, without an international reputation as a playwright or an American visa to fall back on. It is the narrator who ultimately writes the conclusion of Engelbrekt’s play in his own mind, Brecht having abandoned the play in favour of one which will attempt to identify the Roman senator Catiline as a revolutionary. Brecht’s purpose is his failure, the flailing and aimlessness of the movement at the most crucial times. Brecht’s enormous library, inventoried over seven full pages, offers a glimpse into the cornerstones of the intellectual culture Weiss has been silent on in this second volume. We see them thrown after fascist police to lie in the streets, sealed in boxes, hidden in cellars to be sent to Brecht at a later date, in the hopes that it will survive the coming conflagration that it is too late to stop.

One also discerns within The Aesthetics of Resistance a road not taken for an aesthetic programme rooted in dialectical materialism. One continually expects a repudiation of the party and its supposedly authoritarian structures in preference for a pessimism or culturalism, which, as Perry Anderson notes, characterises much of the postwar Marxist tradition in the West, but this never materialises. The narrator’s commitment to the historical destiny of the working class is rigorously maintained. The relationship, or prospective relationship of the masses to any given work of art never disappears from view. The relationship between culture and revolutionary politics within Marxist philosophy and practice is always fraught; a separation of the base and the superstructure, demoting cultural expression to the domain of the latter is wholly necessary in formulating an immanent and scientific critique of the laws of the capitalist mode of production which moves beyond the limitations of idealism, but is hardly sufficient as an aesthetic framework, when what is most noteworthy, both for Weiss and presumably for the rest of us, are the particularities at work as opposed to the mere fact of their being embedded within historical processes; their role in this abstract capacity can only take us so far. One of the great strengths of Weiss’ outlook is that he never attempts to force the issue by attempting to render culture and revolution synonymous. In the first volume the more or less exclusively intellectual interests of the narrator and his close friends Hans Coppi and Horst Heilmann were mediated by their involvement in worker’s education. With these institutional supports of the SPD and the trade unions lacking in Sweden, the contradiction is posited more directly and it can be argued that this second volume taking a deeper look at the advancement of history by its bad side, necessitates less attention to its superstructural reflections. There is furthermore a sense in which the narrator’s growing desire to write, to bear direct witness to his historical moment, has the potential to enter into contradiction with his party work. The pacifist Rosalinde Ossietzky is one interlocutor through whom the contradictions are brought into clearer view for the narrator, challenging the rationalistic core of his Marxism, arguing that it fails to address the true nature of the present crisis and have nothing to say about the sheer extent of the failure, stupidity and pointless death. This argument is not returned to, but one wishes it was; if only because it is the one moment in which the taut formal concentration of The Aesthetics threatens to come apart or enter into a humanist mode.

While the present reviewer lacks the language skills to assess the quality of Joel Scott’s translation, or indeed locate the work within its entire three-volume span as it deserves, I can say there is no noticeable difference in the quality of the writing as it appears in the first volume and that the appearance of the second volume of Weiss’ The Aesthetics of Resistance in English, thanks to the efforts of Duke University Press, confirms its reputation as one of the twentieth century’s most unique and distinctive works of literary art.